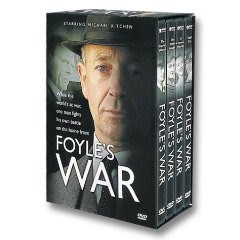 In the three weeks since I wrote my first review of a Foyle’s War episode (“Fifty Ships,” episode 1, season 2), I have had a chance to watch all of Season One. I gave thought to reviewing these films one-by-one they are so magnificent. Instead, I'll write about the entire season.

If you’ve read my earlier review—which I just did—you’ll note that I made some assumptions about things. The biggest one was Foyle’s wife. Even as “The German Woman” (episode 1, season 1) starts, Foyle is a widower, not a divorcee. That fact alone makes the old flame storyline in “Fifty Ships” that much more poignant. And, it’s yet another reason to watch this series in order. The mysteries they solve are independent of each other. It’s the character progression that is important.

For example, in “Fifty Ships,” Foyle’s driver, Samantha, ends up staying the night at the home of her partner, Paul Milner. With no context to draw on, when his wife returns home and sees them dancing, I just assumed it’s the typical man-wife thing. Now, having watched season one and witnessed Paul’s injury and recovery and seeing how it has strained his marriage, the dancing scene carries much more weight.

So, long story short: watch these shows in order if you can. You will be rewarded.

Season One consists of four 100-minute episodes. “The German Woman” is the first and we are introduced us to Christopher Foyle, a veteran of The Great War. Now that Hitler has started another war, Foyle considers his talents could best be used by the government, not in some provincial police station down on the coast. His requests continue to be rejected. until, of course, his investigation into why the German-born wife of a respected Englishman is still free (the rest of the German-born people having been rounded up and sent away from the coast) leads to a potentially damaging scandal. When the woman turns up brutally murdered, Foyle’s doggedness intensifies. As you could expect, his desire for a military post is now offered as an incentive to stop the investigation. His character is almost fully revealed in one decision: stay on the case, knowing he'd never be offered the post again. It is also in this episode where he is assigned Samantha Stewart as his driver and Foyle recruits a former policeman, Paul Milner, a man who suffered injury and an amputation of part of his leg in battle.

Episode 2, “The White Feather,” is, to date, the most emotionally engrossing entry into this series. Guy Spenser, played wonderfully by Charles Dance (of Bleak House), is a Nazi sympathizer who speaks at the Friday Club and awaits the invasion of England by Germany. He has a few allies, one of which is Margaret Ellis, who runs a hotel called The White Feather. Ironically, a white feather in World War I was a sign of cowardice. Foyle comes into the story when he interviews Ellis’s chambermaid, a Jew, who was caught cutting telegraph wires. One night, Ellis, Spencer, and a few pro-Nazi supporters are sitting in the great room of The White Feather when the lights go out and shots are fired. When the lights go on again, Margaret Ellis is dead. The suspicion is that the shooter tried to hit Spencer but missed in the dark. The chambermaid’s boyfriend, a fisherman, is distraught over her imprisonment and makes a few actions that get him detained by the police. Meanwhile, the British soldiers over in France are surrounded by the Germans at the town of Dunkirk. Every available fisherman with a boat is crossing the channel to pick up as many men as possible. Foyle agrees to release the boy and work the fishing trawler with his father. During the evacuation, Foyle discovers the true killer (in really well-done Sherlock Holmes observational style) and returns to the beach to let the young man know he’s free. As you might imagine in a story set in wartime, the young man is killed.

“A Lesson in Murder” is the third episode of season one. The Germans have begun to bomb England and many of the children of London have been sent away into the country for safekeeping. A young boy, Joe, gets into all sorts of mischief at an estate of a wealthy landowner, a judge who all but hates that the boy is in his house. When the boy is killed in a bomb intended for the judge, Foyle and Milner start investigating. This episode has a good number of historical details woven into the plot. Foyle’s initial investigation is into the death of a conscientious objector in prison. Later, we learn the details of how and why the children of London are evacuated. We get a glimpse of how powerful families were able to keep their loved ones from being drafted. And lastly, we see the power of prejudice. Foyle has a long-time friend, an Italian man, who runs a restaurant. The Italian’s son and Samantha get along well. However, as soon as Mussolini declares war on England, the townsfolk of Hastings turn on the restaurateur in a heartbeat. Again, I can’t stress it enough: it’s the non-investigatory details of this series that allows Foyle’s War to rise above your run-of-the-mill detective story.

“Eagle Day” rounds out season one. Foyle and Milner investigate the body of a man found in a bombed out house with a knife sticking out of his chest and a locket clutched in his hand. The dead man was a lorry driver for an art museum in London. The curator decided to move the priceless artifacts out of London and into the country for safekeeping for the duration of the war. Milner tracks down the locket’s owner, a young woman, Lucy, who died under mysterious circumstances months before. As the investigation continues, Andrew, Foyle’s son, is stationed in Hastings as part of top secret duty: fly his Spitfire around the area to help train the British radar operators about the new system. Eventually, Andrew is accused of treason and Foyle must find the murderer of the lorry driver, acquit his son, and help convince Samantha’s father to allow her to remain his driver.

All in all, this is a splendid collection of stories, made all the more emotional and dramatic with the World War II setting. The acting is superb by the main three with Michael Kitchen delivering award-winning work. As a man of few words, Kitchen must allow Foyle’s emotions to come out in other ways, usually through facial expressions and his eyes. Milner’s transition from wounded war veteran who doesn’t know what good he can do to loyal partner of Foyle is fun to watch. Pay special attention to this relationship in "The White Feather." And good old Samantha is like many of us: wanting to do more to help her boss, flubbing it up sometimes while outshining her two males partners at other times.

If you haven’t made time for Foyle’s War yet, I can’t recommend these movies highly enough. Let me put it to you this way: The Dark Knight is, by far, the best thing I’ve seen this year. Foyle’s War ranks as Number Two. It’s that good.
at November 24, 2008
Email ThisBlogThis!Share to TwitterShare to FacebookShare to Pinterest
Labels: Movie/Music Mondays, Movies

This sounds like a great series. Really enjoyed the review.

Just to let you know that I very much enjoyed reading your two Foyle's war reviews.

I am a huge fan of the series, and of Michael Kitchen, and I hope you'll enjoy the rest of it!

Perhaps it's my affection for England - a love that makes my wife roll her eyes - that causes me to have a higher regard for BBC and ITV small screen productions than those of America, which seem so crass in comparison. So many of the former seem uncommonly funny, intelligent, or both. FOYLE'S WAR is an uncommonly intelligent detective drama, a period piece set on England's south coast in 1940. And, to keep the record straight, my wife's dedication to this series is at least as pronounced as mine, if not more so.

OK in the previous post do you speak about a movie, but you never mentioned something about a TV series, now I gonna take my time search this.