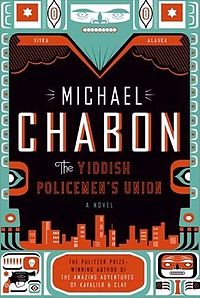 (This is the November 2012 edition of Barrie Summy’s Book Review Club. For a complete list of the other titles, click the icon following this review.)

Generally, mystery writers don’t ask the historical question “what if.” Science fiction writers are the ones who ponder the questions of alternate history. What if the South won the Civil War? What if Rome never fell? What if Hitler won World War II? One of the few examples of “counterfactual history” in the mystery genre is Richard Harris’s Fatherland. In that novel, he deposits his detective in 1964 Berlin, in the days leading up to Hitler’s birthday. Aside from this major example, alternative history mysteries rarely exist.*

So it took a writer not usually associated with the mystery genre to ask another what if question. In The Yiddish Policemen’s Union, Michael Chabon extrapolates an entire separate universe from a little-known event in our actual history. In 1939, as Hitler was rounding up European Jews, Harold Ickies, the Secretary of the Interior, floated an idea of allowing Jewish refugees to settle in part of what was the Alaskan Territory, Sitka. An influential Congressman killed the bill in committee and the resettle never materialized. In Chabon’s book, however, it is the Congressman who is killed, and the Federal Jewish District of Sikta, Alaska, is born. The looming shadow throughout the entire book, however, is Reversion. That is, at the end of 2007, the Sitka District, a federal district within the state of Alaska, reverts back to ownership by the state. As the story starts, Reversion is merely two months away.

For new writers—and not a few old ones—the directive has always been to write what you know. For a place that never existed, Jewish Alaska comes alive like a tourist brochure, complete with the cold, constant rain, and the salty smell of the surf mingled with cabbage. One of the first things a reader notices is the tense. Chabon used the present tense. That little nuance is one of the major aspects that helps to bring all the characters and this non-existent city to life. Had the author used the past tense like so many others do, the idea that Jewish Alaska could actually exist would be more difficult. Just like a reader who opens a book of ancient history, the past tense would have relegated Sitka to the past. Maybe it existing, maybe it could have existed, but not really. The present tense verbs (and flashbacks in the past tense), reinforces in the reader’s mind, with each passing sentence, the possibility that the Sitka District is real. Better go check the atlas or the internet just to be sure.

Chabon sets this story in 2007, the present day (it was the present day when I read this book the first time back in 2007). While echoing Chandler and other great mystery writers from the Golden Age, Chabon puts his characters in the 21st Century. Sure, the good folks of the District might speak Yiddish, but they have the internet, cell phones, and 24/7 cable news. They also have murder, conspiracy, terrorist, and a bureaucracy that can make James Ellroy’s LAPD proud.

The reader experiences Sitka through the eyes of Meyer Landsman, a down and out homicide detective (is there any other kind?) whose only true friend seems to be the bottle. Chabon is a fan of the stories of both Sherlock Holmes and Phillip Marlowe. The Holmes stories endure because of the atmosphere. We want to return to the late Victorian era London time and time again. Despite the protestations of my science fiction book club who said that this story didn’t have as much Alaska-ness to it, I got the definite sense of atmosphere to Jewish Sitka. From Marlowe, nearly a quintessential 20th Century example of a hardboiled detective, Chabon fashioned Landsman, almost Marlowe’s Jewish cousin. How both inspirations work together is fascinating to watch and read and the pages go by.

Like any good hardboiled detective novel, a murder is what sets this story going. One of the fellow residents in the down and out hotel (is there any other kind?) Landsman lives in turns up dead. The superintendent, knowing Landsman is a policeman, asks the shamus to have a look. Naturally, Landsman gets himself on the official case and wants to investigate the shooting. But, with Reversion on the horizon, his superior officer—who just happens to be his ex-wife—wants to close out all outstanding cases and doesn’t want to open a new one. Landsman objects, and begins conducting his own, unauthorized investigation, and it is here where we get the tour of the world of Jewish Alaska. We get glimpses of how the Jews interact with the Native Americans in the area, how all the sub-groups within Sitka interact or have power over each other, and how the Jews see themselves within the broader world. Utterly fascinating stuff.

Now, the novel is not without its faults. Sometimes the plot plods along in fits and starts, lurching in one direction while stopping in other spots. But what carries it all along is Chabon’s prose. It is magnificent, magical, lyrical, and, as one of my fellow book club members said last night, remarkable how the author crafts interesting words into sentences and paragraphs heretofore unknown in the English language. Having been the only one of us four to have previously read Chabon (this counts as my third Chabon book this year), all of them are looking forward to reading more, despite their issues with The Yiddish Policemen’s Union. Having re-read this book, I can again attest to the joy I always have when I read a Michael Chabon novel.

*If you know of other alternate history mysteries, please let me know.