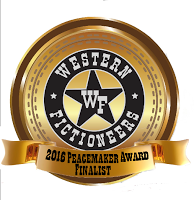 I am a proud member of the Western Fictioneers group from the start. In fact, one of my Calvin Carter stories, "You Don't Get Three Mistakes," has the honor of being the first story I ever wrote actually be published in a physical book. That was in Western Fictioneers first anthology, The Traditional West."

A few years ago, I volunteered to read and help judge the short fiction contest. I read so many good stories that it was very difficult to narrow down my choices to a mere five.

This year, however, I entered a couple of stories and one, "The Box Maker," is a finalist for the Best Short Fiction Peacemaker Award for 2016!

Over the years, I have heard artists, writers, musicians, actors, and all sorts of creative folks claim that it is an honor just to be nominated. My goodness, how that rings true today. I am truly humbled merely to be on the list.

And huge congrats to Robert Randisi who earns the Lifetime Achievement Award. What he has accomplished in his career is staggering and something for which to strive.

Dreading the End of "Castle"

It was never just about one person.

Last night on “Castle,” the 21st episode of season 8, we likely saw the last of the "real" Castle.

By real I mean that there are two lead actors: Nathan Fillion in the titular role and Stana Katic’s Capt. Kate Beckett. From day one, despite the fact that her name is not in the title of the show, Beckett has been an integral part of “Castle.” There were times, deep in seasons 2 through 4, when I came out and said that they should just switch the show name to "Beckett" because that's how powerful the stories about the character were. In fact, after watching last night's program, I re-watched the behind–the–scenes DVD extra from season 1. In discussing what makes the television show "Castle" work, creator Andrew Marlowe summed it up best: "She grounds the show."

I think it's pretty much common knowledge now that the ABC television network has fired Katic as well as Tamala Jones who plays ME Lanie Parish, two stars present from episode one. When the news broke, I think most of us were shocked. That's not an understatement. The reason given was budgetary. I guess Katic just cost too much. But what shocked me more was the brazen attempt to change the chemistry of the show merely for money. I strained to think of something comparable to the firing of one of the two co-leads of a television show. It would be like if Leonard Nimoy was fired from “Star Trek.” It would be like if Gillian Anderson were fired from the “X-Files.” It would be like if Dezi Arnez was fired from “I Love Lucy.” It would be like if Patrick Dempsey was killed off from “Grey's Anatomy.”

Whoops. Bad analogy. That one actually kept going. But there's a key difference: “Grey's Anatomy”is an ensemble piece. It is more than two characters. It is a group. Inasmuch as “Castle” has become an ensemble show — with Ryan and Esposito, Alexis, Martha, Lanie, and whichever commanding officer is in charge — "Castle" is a binary system. Everything revolves around the two co-leads. You can't take one and think you going to keep things the same. It simply won't work.

So what are we left with? ABC has still not said yes or no to a potential season 9. The rumors suggest that if season 9 is a go, it would be a shortened 13–episode season. Really? Look, I know the show began as a 10–episode midseason replacement, but it has grown to be a full 20+ episode series ever since. The show was already in syndication and is already surpassed the 100–episode mark. So, unless there is other number that has to be reached, having an extra 13 episodes in a series seems like a dumb move.

But to take something that is so beloved by so many and literally rip its heart out—let's be honest, Beckett was the heart of the show, maybe even its soul—seems like such a waste. I never watched "How I Met Your Mother" but I know that the series end disappointed many fans. Heck, I'm an “X-Files” guy and that series finale was less than spectacular. Many series finales don't live up to all the time and emotional investments of fans. There are a few exceptions: “MASH” comes to mind and is a beautiful example of the series finale. Heck, thinking about it now, it seems like more shows just peter out than end strong and satisfyingly.

More and more, I’ve come to the realization that “Castle’s” season 7 finale was the perfect ending. When the episode was written, the creators didn’t know if they would be picked up for an additional season, so they wrote the final episode not as a cliffhanger but as a summation of all that had come before. It was beautiful. I remember thinking, even at the time, that they could've ended the entire run right then and there and everyone would be happy. When I discovered that a season 8 of “Castle” was going to be a real thing, I was overjoyed. More Castle was always a good thing. Right?

Wrong. Sure, I have enjoyed most episodes this season, but not like past seasons. I have rolled my eyes more than once with the whole Loksat arc as The Thing to keep Castle and Beckett separate. That Castle himself has become the comic relief in his own show is irritating. Ryan and Esposito are, as always, wonderful. If executives wanted to spin off “Castle” and create and show with just the detectives, I’m game for that. And the absence of Beckett wore me down. I’m not a viewer who knows what goes on behind the scenes. And, ironically, the day the news broke about Katic I didn’t have access to the internet (and only watched that night’s episode via regular TV antenna!), I thought “Beckett’s not in this show much anymore.”

I have been a fan of "Castle" since the original promo. When I think of “Castle,” and particular episodes or moments come to mind, the ones that I remember best all happened in the first seven seasons. The swing set. The science fiction convention. The 1940s one. The early episodes when Beckett, as a reader and fan of author Richard Castle, was all but pinching herself as she got to work. The playful banter between then that slowly morphed into genuine affection and then love. The Johanna Beckett episodes where Katic got to show just how good she can bring Beckett to life. The arrest of Senator Bracken. The one where Ryan’s gun was stolen and used to kill someone. The one where Ryan and Eposito were trapped in the burning building (is that 7). The freezer. The one where they first kissed as part of a ruse. The fun references to Firefly. And, also, the reading of the Nikki Heat books *in real time* and how they were a great counterpoint to the show. They all go together to make Castle the special, special show.

The executives have all but stomped on those memories and tarnished them.

Actually, that's not correct. We will always have seasons 1 through 7. I’m a Star Wars generation kid. That movie series helped shape my life. When the prequel trilogy didn't live up to expectations and folks complained that Lucas destroyed their childhood, that’s not really the case. Those childhood memories are still there, intact, a virtual time machine in the subconscious. I can always go back and remember how much fun I had living a life with Star Wars.

So, too, with “Castle.” We are T-minus six days until the finale of “Castle” season 8 and the end of “Castle” as we know it. Katic will make her inevitable departure to the series. I've not read any spoilers—and won’t—but come on. How else does Beckett leave the series? I will have my tissues ready on Monday night because I know I will shed tears not just at what happens to Kate Beckett but what is happening to one of my favorite TV shows of all time. I know I’ll be upset.

But I have a surefire way to assuage my sadness. Around 10:10 p.m.—after just enough time to commiserate with fans on Facebook and Twitter—I'm going to have the season 7 finale queued up. And I’m going to re-watch it (I haven’t seen it since last year). That will be my happy ending to the show. By 11:00 p.m., I’ll be smiling again. I’ll still be irritated that some executives thought that the best way to keep the show afloat and reduce costs was to fire a co-lead rather than, say, negotiate a rate reduction or film elsewhere or anything. But I’ll be happier.