Over on the excellent music podcast, Pods and Sods, today's episode was about favorite cover songs. Have a listen to the episode then head on over to their Facebook page and join the conversation.

I'm a Man - Chicago Transit Authority (original: Spencer Davis Group) - Much more energetic, with a 64-bar latin percussion break. The version they were performing in the late 80s/early 90s with Dawayne Bailey was particularly good.

Little Wing - Sting (Jimi Hendrix) - Heard the Sting version first and prefer it mainly because of the Gil Evans arrangement and slowed down guitar solo that morphs into the soprano sax solo.

In Your Eyes - Jeffrey Gaines (Peter Gabriel) - This is a cover that does NOT better the original but it's so unique that I often gravitate to it.

Black Crow - Diana Krall (Joni Mitchell) - Krall's 2004 CD found her writing her own material with her then-new husband, Elvis Costello. This song, however, has a lot of nice souring piano flourishes that echo Vince Guaraldi, a pleasant guitar solo, and Krall playing around with her phrasing.

River - Robert Downey, Jr. (Joni Mitchell) - Didn't realize I'd have to Mitchell songs here but oh well. I like Downey's vocal stylings (love his cover of "Smile" as well) and this arrangement, with cello, is one of the songs I always go to around the 20th of December when I'm just about tired of the standard Christmas songs.

Smells Like Teen Spirit - The Bad Plus (Nirvana) - I was tempted to pick the Paul Anka jazz arrangement [where he covered a lot of rock songs with a jazz band) but opted for this song which is the tune that put The Bad Plus on my radar. Piano, bass, and drums. That's it. They take the song from the standard instrumental arrangement into a dizzing array of improvs on the theme. Sometimes you'd think they're just doing their own thing but they come back together at the end.

*I didn't include any Christmas tunes but there are a bunch I could have listed. The one that first comes to mind is Chicago's version of Little Drummer Boy. It is, for me, THE version. It's to the point where I hear the horn breaks Chicago wrote whenever I hear *another* version of LDB. 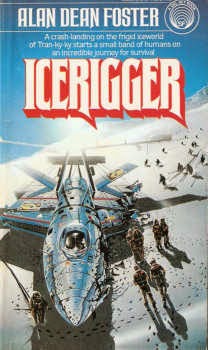 (This is the February 2015 edition of Barrie Summy’s Book Review Club. For the complete list of fellow reviewers, click the link at the end of this review.)

If you’re looking forward to Star Wars: Episode VII later this year, then you can thank Alan Dean Foster for writing Icerigger.

Icerigger, published 1974, was the third book a young Alan Dean Foster published after The Tar-Aiym Krang (1972) and Bloodhype (1973). The story features two human heroes: Ethan Fortune, a salesman in his twenties, who is on the way to the remote ice world of Tran-Ky-Ky. Skua September is a hulk of a man with a shock of white hair and has seen his share of the wonders the Humanx Commonwealth has to offer. These two men, who don’t know each other, are, like all great heroes throughout literature, in the wrong place at the wrong time.

While on the space liner orbiting Tran-Ky-Ky, Ethan stumbles into a kidnapping-gone-wrong of financier Hellespont du Kane and his daughter, Colette. The trio, along with another pair of humans, are shuttled into a lifepod...where a very drunk Skua is sleeping off a drunk. He fouls things up for the kidnappers and then things go really bad. They crash on Tran-Ky-Ky thousands of miles away from Brass Monkey, the one town the Thranx Commonwealth had established, the one town where the kidnappers were going to ransom du Kane.

Very soon thereafter, Skua appoints a reluctant Ethan as leader. Together, including one of the kidnappers--Skua took out the other one--they have to figure out a way to get to Brass Monkey, the only Humanx settlement on Tran Ky-Ky. They befriend a group of the native species, Tran, a humanoid-cat hybrid with fur all over their bodies and claws on their feet that have adapted to their environment (think the middle two claws having curled under the feet to basically make skates).

What follows is a traditional adventure tale that might have taken place here on earth except that the planet’s oceans are all frozen. It’s a clever twist on the old swashbuckling adventure yarns where the characters may face traditional hazards--a warring tribe attacks the Tran group helping Ethan and Skua--but with the ice, Foster gets to turn a siege battle on its ear. You don’t get a whole lot about the larger Humanx Commonwealth that you do from his most famous series about Pip and Flinx, but it is referenced. It's more like a peek into a larger world that you can explore elsewhere.

While I enjoyed Icerigger, but it's not without issues. For a science fiction story, there's not a whole lot of science fiction there. Sure, there's an alien world with a new alien species but the book is more like a pirate story than a true SF yarn. Actually the one story that kept coming to mind was Edgar Rice Burroughs' A Princess of Mars. You see, both stories derive their structure from a main human character (John Carter, Ethan in Icerigger) who find themselves on an alien world and must Do Something and encounter strange things along the way. Again, what I expected was some more science fictional because, you know, of Star Wars.

The reason I bring up Star Wars is that Icerigger was the novel that landed Alan Dean Foster on George Lucas’s radar. Back when Lucas was making the first film, he and his team read Icerigger and liked it so much that they approached Foster to gauge his interest in ghost writing the novelization of the movie and an original sequel. Foster agreed. Back in the day, when my entire young life was consumed with Star Wars, I read that novelization more than once never knowing it was Foster. I also read Splinter of the Mind’s Eye, the first original novel back in 1978. That’s when I locked in on Foster and he became my first favorite SF author. He helped secure the Star Wars legacy for me a millions of others and it all started with Icerigger.

The adventure of Ethan Fortune and Skua September continue with Mission to Moulokin (1979) and The Deluge Drivers (1987). I’m definitely jumping right into the second book now because I want to see how this adventure ends.