For my four mystery novels, I created new Second Edition ebook covers. Those came out back in May. All four now have a unified look and feel and, moving forward, future books in this growing series featuring three characters will all sport similar covers.

But I hadn’t updated the paperbacks. I removed them from CreateSpace back in May with the intention of focusing on ebooks. But now, in the fall, I’m revising the paperbacks. I updated the covers with Adobe Illustrator and revamped the interior layouts with InDesign. Those files looked very good on the screen in those two programs and they even looked good on CreateSpace’s online viewer. Nevertheless, I ordered hardcopy proofs. I still get a charge when I open a box from the mail and see my books inside. 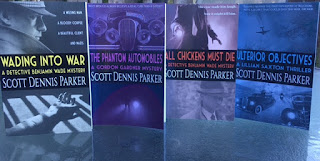 Despite how good they looked initially, I dove into their pages. I wanted to verify all the minute details were perfect before I approved them for the public.

Boy am I glad I did.

Little things that my eyes and brain easily missed when looking at a computer screen were easily spotted on the printed page. No, it wasn’t with the novels themselves; it was with all the extra material I included within the two covers. For example, in the back of each book, I include some excerpts of other novels. Well, the fonts for the titles of those stories were slightly different across all four books. Easy to miss when you examine each individual file but glaringly obvious when you have all four hardcopies on a table in front of you each turned to the same respective page. Ditto for the “About the Author” sections. One cover’s image was off by a couple of millimeters. Again: it was something I only would have noticed with a hardcopy.

The end result—after some tweaking to the files and re-uploading them—will be better, more cohesive books that will equal those from traditional publishers.

Now, I suspect some of y’all reading this will have the same obvious conclusion: of course this is what you’re supposed to do. I know it and have done it time and time again. But when it comes to a series of books that have a unified look-and-feel, I advise all authors out there to place all the books in front of you, laid out on a table. It will only be then that discrepancies show themselves, discrepancies you might have missed upon reviewing each book separately.

What Batman: The Animated Series Got Right


I think most folks here know Batman is my favorite superhero, and, by general consensus, Batman: The Animated Series is arguably the best on-screen rendition of the character. This year is the 25th Anniversary of the series. All four seasons are available on Amazon Prime so I’ve been watching an episode or two most every day.

Boy, does this show hold up well.

By 1992, we were about six years into the Dark Era of Batman, birthed by Frank Miller’s The Dark Knight Returns (1986) and Batman: Year One (1987). Throw in Grant Morrison’s Arkham Asylum (1989) and you had the character shift from a man who was a detective (and who had a life) to the brooding, unhumorous character we got for the next twenty years. As cool as it was in the late 80s to see Batman portrayed like that, when it became the *only* way he was written, it grew tedious and tiresome.

Which was why Batman: The Animated Series (TAS) was such a surprise at the time and such a breath of fresh air twenty-five years on. Back in 1992, seeing a TV version of Batman that reflected the current trend in the comics as well as the two Burton movies was fantastic. Batman was born a creature of the night, and TAS remembered his Depression-era origins. But TAS was a kids’ cartoon so the violence you started to see in the comics could not be shown on TV. That, to me, kept the focus on the character and his interactions rather than gratuitous violence for the sake of shock value.

We got our darker episodes where various facets of Batman’s character were examined. The violence was present, but it was often just off camera. It had the dual effect of allowing the viewer to fill in the blanks and to pass the censors. “Robin’s Reckoning” and “A Bullet for Bullock” come to mind. “I am the Night” is also a good example because Bruce Wayne doubts whether or not his crusade against crime is worth it. But there were also the lighter, funnier episodes like “Almost Got’em” where a cadre of villains talk about how they almost killed Batman, almost always with a big trap.

TAS also never forgot Batman was actually Bruce Wayne in two key aspects. One, Bruce was human. He needed to sleep and eat, something Alfred constantly harped on in almost every episode. Two, and most important, Bruce/Batman reached waged war against crime each in their own venue. Sometimes, it was Batman punching out bad guys. Other times it was Bruce using his wealth to buy out a bad company. Too often in the past quarter century, we only get Broody Batman and rarely Bruce Wayne. It was such a great thing to see TAS touch on both aspects of the man.

And it is, to date, the only version where Bruce offers the wink to the audience that we know his secret identity. Superman did this all the time in the 1950s series and the 1970s comics, but Batman rarely did.

Among my favorites (and likely yours, too) are: Heart of Ice; Beware the Gray Ghost (Adam West guest-starring!); Joker’s Favor; Perchance to Dream; The Laughing Fish; If You're So Smart, Why Aren't You Rich? to name but a very few. Even a ‘bad’ episode isn’t really that bad.*

Oh, and the opening of each episode is a mini movie, sans any words…but you don’t need any.


So, do y’all have any favorite TAS episodes?

*For my book club, one of the members picked Frank Miller’s Dark Knight III: The Master Race. I loathed the second volume, The Dark Knight Strikes Again, but I am re-reading it before reading DKIII. I am reminded of why I disliked TDKSA so much…while watching TAS’s greatness. Sigh.
at October 16, 2017 No comments:
Email ThisBlogThis!Share to TwitterShare to FacebookShare to Pinterest
Labels: Batman, Blog

I fell in love with the TV show “Castle” from the moment I saw the trailer.

As a refresher, the character of Richard Castle, as played superbly by Nathan Fillion, is a rock star author famous for his thriller series featuring the character Derek Storm. In the series premiere, Castle is celebrating his latest novel, the book in which he killed off Storm. And he’s suffering from writer’s block. Cut to a killer who is using scenes from Castle’s novels and the New York City police, in the person of Detective Kate Beckett, come and question Castle. He ends up helping solve the case, complete with delicious sexual tension, and pulls some strings with the mayor to get a favor: allow Castle to tag along with Beckett as an observer while he does “research” for a new series of novels featuring his new character, Detective Nikki Heat, as inspired by Beckett.

Yeah, it’s a mind twist when you write it all out, but what was even more twisty was when Season 2 premiered in the fall of 2009…and an actual Castle book landed on actual store shelves. It had Fillion’s face on the back and HEAT WAVE was the first Nikki Heat book. Every fall, a new season would start and a new Nikki Heat novel would be published. Heck, even Derek Storm himself was revived (he faked his death!) and new Storm novels were published. Graphic novels, too. It was heady days for fans of the show.

Ultimately, the TV show was cancelled, but the books kept going. HIGH HEAT arrived last fall and, with HEAT STORM, the series comes to an end. HIGH HEAT actually was published back in May, but with other books on my TBR pile, I decided to wait until September to read (actually listen) to this last novel. Even Nikki Heat novel has “Heat” in the title and every Derek Storm novel has “Storm” in the title, so you know exactly what happens with HEAT STORM: Nikki Heat and Derek Storm team up.

In a series of alternating POV chapters, HEAT STORM picks up right after the cliffhanger of HIGH HEAT. Storm has been tracking down Chinese counterfeiters and his trail has led him back to Heat, but not Nikki. Her mother, Cynthia. In yet another mind-bendy twist, the life events of the TV show character Beckett (who’s mother was killed and that prompted Beckett to become a cop) are also the same for Nikki Heat (her mother also was killed). But in the course of HIGH HEAT, someone who looks remarkably like Cynthia Heat is roaming around NYC. And the secret is revealed here in HEAT STORM.

I have loved every single novel as published by “Richard Castle” and have read some more than once. Oddly, NAKED HEAT, the second novel, is one I’ve read about 3-4 times, the latter two was when I deconstructed the novel to determine how the writer crafted such an easy going page turner. I’ve used that information on my own books.

HEAT STORM serves as a greatest hits. You’ve got Storm doing super-spy stuff and Heat doing her best detective work. She’s a great character who, over the course of the entire series, was given a chance to grow and breathe. Surprisingly, the character of Jameson Rook (the counterpart of “Richard Castle”) doesn’t feature too prominently so you certainly have to take that into account. But the author (you can likely find the answer if you search the internet) ends the book series in a satisfying manner.

The entire series is well worth your time. As both the TV series and the book series went on, what I loved was how the books reflected the TV show. It took Castle and Beckett something like four seasons to get together. In the books, their counterparts got together in book 1. It was a model of how to keep the romantic chemistry going even though the “will they or won’t they” aspect had already been revealed.

The entire Castle phenomenon was one-of-a-kind. I still miss the TV show and now, with the publication of HEAT STORM, the book series is also at a end. As melancholy as that realization is , the Nikki Heat series remains one of my favorite book series of all time.

(This is the October 2017 edition of Barrie Summy’s book review club. For the complete list, click the icon below.)