Book Review Club: Gabriel Hunt at the Well of Eternity by James Reasoner 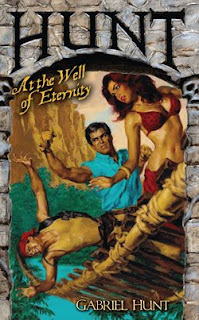 (This is the May entry for Barrie Summy’s Book Review Club. Head on over to her blog for the complete list.)

“Return with us now to those thrilling days of yesteryear....”

There’s a certain number of y’all out there who, upon hearing these words, got (and probably still do) a big, goofy grin on your faces and plopped yourself right in front of your family’s radio. Another portion of the blog-reading world, like me, discovered this phrase from cassette copies of the old time radio shows and loved them just as much as the original airings. Then there are those who don’t even know what I’m talking about or the thrills you can get from good, old-fashioned storytelling. Well, good news: there’s a book out there that will remind the old guys and gals of the glory days of storytelling and introduce a new generation to the glory days of the cliffhanger.

Gabriel Hunt at the Well of Eternity is the first book in a series of six that follow the exploits and adventures of one Gabriel Hunt. A two-fisted adventurer in the mold of Doc Savage and Indiana Jones, Hunt is the creation of Charles Ardai, co-founder of Hard Case Crime. Just as Ardai saw a void in the old-school pulp crime novel, so, too, did he see a void in the old-fashioned pulp adventure novel. Come to think of it, I can’t think of another literary adventurer that comes between Savage and Hunt. I know he or she is probably there. I’m just not that fluent in the pulp adventure canon.

And speaking of cannons (yes, I’m being cheesy), this story, written by James Reasoner, starts off with a blast. Gabriel and his brother, Michael, independently wealthy with the $100 million dollar Hunt Foundation, are at a black tie event at the Metropolitan Museum of Art in New York. A drop-dead gorgeous woman arrives (natch) and makes her way across the museum to give something to Michael. But, before she can, a man with a gun accosts her and a gunfight ensues. The mysterious woman is kidnapped but not before delivering her secret cargo: a bottle of water in an old whiskey bottle wrapped inside an old Confederate cavalry flag.

A car chase follows, then an airboat chase, then another gun fight, and this is all within the first fifty pages or so. Honestly, it isn’t until the end of chapter ten that you get a chapter that doesn’t end with a cliffhanger. It’s our time, and Gabriel’s time, to take a breath. Reasoner’s prose is effortless when it comes to describing action. This is the first book of his I’ve had the pleasure of reading and, holy cow, can he write some fantastic prose that just glide into your brain. As Gabriel tracks down clues first to the flag’s origin and, later, to a distant site deep in the Guatemalan jungle, Reasoner spices the present story with off-handed references to earlier Hunt adventures, giving us the barest glimpse of a life well lived and many adventures to be had.

And the book is just darn funny. Taking it’s cue from the Indiana Jones and National Treasure films, Gabriel Hunt finds himself in some dreadful circumstances and, yet, always finds the humor...after the fact. He’s not flippant like James Bond became. He genuinely feels for the allies that fall beside him and holds no remorse for those that need killing. However, he does find time to grin and, since he has the companionship of a different gorgeous woman along the way, he finds time for other things as well.

I read this book with a pencil in hand, circling words and phrases that caught my eye. I’d be quoting half the book if I were to cite them all. There’s a wonderful inside joke in the middle of the book that I won’t ruin here. You’ll know it when you see it. Let me quote a couple of passages just to give you a sense of the fun we’re all having with Gabriel Hunt as our guide.

The only crime he’d [Hunt] committed lately was tampering with evidence. Well, that and discharging a firearm illegally on the Queensboro Bridge. But he didn’t think the men in the SUV could be filing any complaints with the police about the incident.

“Gabriel Hunt,” the man shouted [while deep in the jungle]. “I know your must be here somewhere.”
Cierra glanced over at Gabriel in surprise. Gabriel shrugged.

I also quote a couple of sentences in my Two Sentence Tuesday post yesterday.

“Pure adrenaline, pure fun” are the words Ardai used to describe the Gabriel Hunt books in my interview with him back in January. Back then, I couldn't wait for May. Now, I can hardly wait until August when the next book is published. As I wrote yesterday on this blog, I haven’t had this much fun with a book since Don Winslow’s The Dawn Patrol.

Since it’s May and that means all the fun popcorn movies are starting to get released, do yourself a favor and pick up Gabriel Hunt at the Well of Eternity. It fits right in with the best of the summer films and you can read it as you stand in line to watch Star Trek.

And if someone sees you reading the book and asks about it, just show them the gorgeous cover (by Glen Orbik), smile, and say “it’s a return to those thrilling days of yesteryear.”
at May 06, 2009
Email ThisBlogThis!Share to TwitterShare to FacebookShare to Pinterest
Labels: Book Review Club, Pulp Fiction

Loved the book as well, Scott. If this is your first Reasoner book, best get cracking man! You're way behind.
While I haven't read nearly all of his considerable body of work(I have about fifteen in my TBR pile now), I have finished a good number of them and can honestly say I haven't been disappointed yet. There's not many writers I can say that about.

I can't wait to read this.

Good review but not my kind of book.

It's the humor that's convinced me to give this book a go. Plus, you're incredible enthusiasm!

On the money review. I feel like this character is a worthy successor to Lester Dent's creations and other 30's and 40's pulps. And I would recommend The Troopers by Mike Jameson who is almost as good as J.R.

Great review. Have ordered this book and am even more eager for it to come now.

Randy - Yeah, I know. I'm WAAY behind on the Reasoner books. I'm a'gettin' there. I've heard Texas Wind is The Book to read.

Patti - And I can't wait to read book #2. You won't be disappointed.

Sarah - Thanks for the kind words on the review. Sometimes, I'm not sure what the hook is going to be. This book made it easy: Hunt is the Hook.

Barrie - You know what it's like when you find a book and can't wait to tell someone about it. This is that kind of book. Oh, and my June selection (which I've already started) is another one of those books...

David - Gracias on the Jameson tip. My sentence in the review about the gap between Hunt and Savage was specifically intended to get me a new pulp adventure list.

Gary - Sorry to make your wait that much more excruciating. Wait until you read it. Then you'll be waiting for Book #2, released in August.

Texas Wind is a good one to try. Dust Devils is a fine crime novel as well. It was one Sandra Ruttan covered on Forgotten Fridays one week.

I like Indiana Jones, this sounds like a good book. Did you know there is a meme hosted by "should be reading" called Tuesday teaser, its the same as your two sentence teaser. You might be interested in following it. If you have time, stop by to read my book review thanks :P

my copy hasn't arrived yet, but i can't wait. Your review has just made the wait worse!

I've seen this a few times & passed over it, but I'm now looking forward to picking it up.

Randy (II) - I now have Texas Wind, signed by the man himself (even though I missed his signing at Murder by the Book). I'll be reading it this summer.

Sarahlynn - This book is the most fun I've had since last year's The Dawn Patrol.

Kaye - I didn't know about Tuesday Teaser. I'll be stopping by your blog. Thanks.

Jay - The only thing worse than waiting for your copy of Book #1 is having to wait for Book #2 *after* you reading Book #1. Well, at least it's only three months and not three years.

C. Sandlin - Definitely pick it up. You won't be disappointed.