My Thoughts on Batman v Superman

If you want to know my thoughts on Batman v Superman: Dawn of Justice and have seen the movie (or don't care about spoilers), head on over to DoDomeDamage and take a read.
at March 26, 2016 No comments:
Email ThisBlogThis!Share to TwitterShare to FacebookShare to Pinterest

On discovering The Struts

So, yesterday, I was flipping through Facebook and ran across a Facebook ad for Rolling Stone. The photo was small and I didn’t recognize the band. Heck, I didn’t even know the band name: The Struts. Anyway, the little one-sentence headline read something like “Blah blah blah blah GLAM ROCK blah blah blah blah.” I honestly can’t remember. All I saw was “Glam Rock.” That’s enough for me. I read the article. [Here’s the link] Hmm, I thought. They sound interesting. The article mentioned Spotify. I’ve got the free version so I headed over there.

I found the album, “Everybody Wants,” and set it to play. The free version of Spotify doesn’t play the albums in order, so I had to suffer the shuffle play.

In retrospect, it would have been nice to note which song I heard first. I can’t remember. From the opening lines of the first song, I was hooked. Shades of the band Slade from the early 70s were all over this song. The second song just kept up the momentum. The lead singer has a way of rolling his Rs just like Freddie Mercury. By the fourth song—this one I know: “Put Your Money on Me”*—I was grinning like a goofball, tapping my foot at my cubicle and bobbing my head. I hadn’t even finished the new LP before I was up and asking my co-workers if they had heard this band and telling them all about the new LP.

I heard The Struts for the first time around 10:00am or so. By 12:40pm on my lunch hour, I had purchased the entire record. The last time an album has so captured my imagination was in 2013 with Daft Punk’s Random Access Memories.

If you like FUN music, unabashedly flamboyant songs as cheeky as they are catchy, and unashamed to tout their artistic influences, The Struts are the band for you.

*Side Note: I *heard* this music before I even saw the band. The music is so fantastic. The presentation, specifically in lead singer Luke Spiller, is over the moon.

Check them out for yourself.

Put Your Money on Me

Could Have Been Me (This appears to be the single) 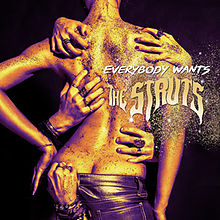 Here's the Amazon link for the new 2016 reissue (with extra songs!)
at March 19, 2016 1 comment:
Email ThisBlogThis!Share to TwitterShare to FacebookShare to Pinterest
Labels: Glam rock, Music 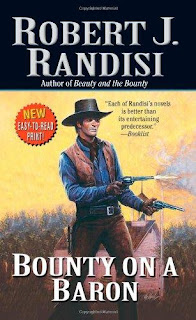 (This is the March 2016 edition of Barrie Summy's Book Review Club. For the complete list of other books this month, click on the icon following this review.)

A few weeks ago, I found myself at my local Half Price Books. By the way, do you have good and bad it is to have a Half Price Books location within biking distance? Anyway, the Men's Adventure section and the Westerns overlap. I check the men's adventure section looking for Bantam editions of Doc Savage. Up there on the top row were a smattering of Robert J. Randisi novels. Now, I know the name. Who doesn't? When you have written over 650 books (not a typo), you are pretty well known. But I had never read anything by Randisi. So, I picked up BOUNTY ON A BARON and took it home.

The main character is a bounty hunter named Decker. Based on the back cover, he was falsely accused of murder and had reached death's door with a hangman's noose around his neck. He was spared the death penalty, but kept the noose as a reminder of his second chance at life. In fact, the noose, casually looped around his saddle, is his calling card. Now, he rides for himself and the bounty money he earns.

The Baron is the name given to a recent Russian immigrant. A professional killer. He took the name Brand, but his reputation takes the Baron.

As you can imagine, this story is a tale of the hunter and his prey. Decker talks to an old friend who has a line on where the Baron might be holed up. Decker makes his way to Wyoming and picks up the trail--and a sub-plot involving a logging community and the recent death of their leader.

The story moves along pretty much as you'd expect for a western of this stripe. That being said, I really enjoyed this book. Decker as a character is intriguing, with just the right amount of honor and hard-edged realism. Sure, he'll shoot you, but only after he's exhausted all other possibilities. The Baron comes off as a killer, yes, but one who actually has some honor to him as well, despite his job.

"Lean" is the term used to describe many westerns, be they Louis L'amour, Luke Short, or Robert Randisi. I appreciate story told in a straight-forward fashion with little fat. It makes for an easy read. Having said that, I wouldn't have minded just a tad more fat. For example, there's a scene where Decker asks a woman a few questions. She's never described other than "the woman." Now, as a reader, I filled in the blanks--and I'm fine with that--but it surprised me a little. Perhaps I just have to read more westerns, a task I've given myself for 2016.

You want to know how much I enjoyed BOUNTY ON A BARON? The day after I finished it, I went back to Half Price Books and picked up two more Decker novels. Turns out there are six novels total in the series. I have a feeling I'll be reading them all in short order.

P.S., since this is a western, I'll go ahead and wish y'all a happy Texas Independence Day!