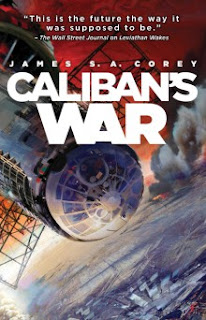 (This is the May 2013 edition of Barrie Summy's Book Review Club. For the complete list, click on the icon following this review.)

Well, it’s been a month and I’ve devoured another giant book of space opera. In last month’s review, I wrote about James S. A. Corey’s Leviathan Wakes. I loved it so much that I moved on to the sequel, Caliban’s War. If I have to sum up my thoughts on this second book in the series, it’s this: Corey suffered no sophomore slump.

Caliban’s War picks up a year after the events of Leviathan Wakes. Jim Holden, captain of the four-person ship, the Rocinante, and one of the two main characters from the first book, has been working for the leader of The Belt (as in the asteroid belt between Mars and Jupiter). He’s basically a cop keeping the pirates in check. As good as the work is--what with all his repairs being paid for by Fred Johnson, the Belter Leader--Holden is missing something. Part of it is a purpose. The other part is that special thing that used to be his trademark, that part of him that made him different than the pure thug he’s kind of turned into. He’ll find that purpose on Ganymede, one of the moons of Saturn and the primary food outlet for the outer planets.

What sequels are all but required to do is introduce new characters and amp up the action. With Leviathan Wakes being a lengthy book, you get a good chance to get under Holden’s skin and into his mind, so much so that you basically know what he’s going to do in any given situation. That’s a tall order to top with Caliban’s War as Corey introduces three new characters that, as the novel unfolds hold themselves up very well.

Bobbie Draper, female Marine from Mars, is on Ganymede as the military force for Mars when a shooting war starts. The Saturnian moon is basically a little like Berlin in the Cold War, divided up between Earth, Mars, and the Belt. When the shooting starts, Bobbie and her platoon rush to aid her fellow Martians against the Earthers...until she sees what is truly happening: the Earthers are fleeing from some thing. That thing is walking, no, running on Ganemede’s surface without a suit, and ripping through her entire platoon. We readers are familiar with the creature: it’s a black-skinned human/alien hybrid made from the proto-molecule from the first book. She is the only survivor, and she is sent to Earth to give her report to the politicians who think more of their own careers than they do about human lives.

One of those politicans is Chrisjen Avasarala, a high-ranking official in the United Nations who swears like she’s a sailor. She has to deal not only with the same politicians Bobbie goes up against (but Avasarala has a much better political acumen than does the Marine) but she’s also up to her eyeballs with the UN military brass and their desire to keep the truth of what happened on Ganymede a secret. Why? That’s one of the questions Avasarala must grapple with as everything starts to go south.

Then there is Prax Meng, a biologist on Ganymede who is trying to find his missing daughter. A divorcee, he learns his daughter, May, was kidnapped right before all the stuff hit the fan. All he wants to do is find her. In the prologue, we readers are privy to her abduction, so we pretty much know that she and the other children taken are likely to be used as human experiments with the proto-molecule. He is out of money and out of resources and out of options until he recognizes one man who has come to Ganymede to find out what’s going on: Captain Jim Holden.

Just like the first novel, Corey mixes the points of view for each chapter. Knowing the template, even though all the characters start the story strewn across the solar system, you know that they are going to end up together. That they do, and the action is just as good the second time around.

But what makes these two books special for me is the quiet moments. There’s a good amount of them as they face challenges and meet them with the resources on hand. It’s the best of the Star Trek spirit, if I can make a comparison. You really get into the skins of these characters. You feel with them. You cheer with them, and then you get your blood pumping with them.

There’s an elephant in this story: Venus. The culmination at the end of Leviathan Wake involved Venus and, all through Caliban’s War, what’s happening on Venus is in the back of everyone’s mind. I have a prediction, one that I’m not going to share here in case you have a hankering to read these novels. I have really enjoyed them, and eagerly await the release of book 3, Abaddon’s Gate, in June. Highly recommended.