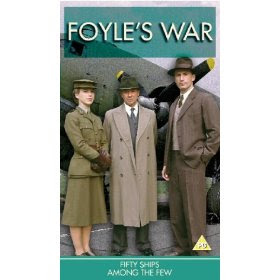 (In place of my usual book review, a review about a splendid little mystery.)

I watched a DVD movie over the weekend and I didn’t realize George W. Bush was alive during World War II.*

I finally got to watch something I’ve had my eye on for a long time: Foyle’s War. This British television series ran from 2001 until this year and includes nineteen episodes. My library has most of the first three seasons but I started with “Fifty Ships," the first episode of the second season.

Christopher Foyle is the Detective Chief Superintendent for Hastings, a small town on the southern coast of the English Channel. He is played with remarkable subtlety by Michael Kitchen, a man I first noticed in the first two Pierce Brosnan Bond films, Goldeneye and The World is Not Enough. Unlike wisecracking detectives over here in America, Kitchen’s Foyle is understated, quiet, reserved, but nonetheless determined to get his man. The visage of Foyle says much about the character. He wears a three-piece suit with a longer overcoat and a thin-brimmed fedora. His voice is soft and rarely belies any inflection. You almost get the sense that he’s tired but an inner flame burns in him, driving him to do his part for the war.

“Fifty Ships” is a traditional mystery in that there is a body but the story and the details of the murder are not gory. In typical mystery fashion, there are at least three threads and one extra humorous sub-plot to keep you occupied. The story opens with the house of Samantha Stewart, Foyle’s driver, being bombed. Volunteer firemen arrive and steal the landlady’s coin collection that once belonged to her late husband. Samantha now has no place to sleep and this provides a wry humorous sub-plot: where will she sleep?

An old friend of Foyle’s, barrister Arthur Lewes, invites the detective to dinner in honor of visiting American businessman Howard Paige. While driving up the dark lane, Foyle sees Richard Hunter, a working class man, who later turns up dead on the rocky beach outside Lewes’s home later that night. Soon, Foyle and his partner, young Paul Milner, investigate the murder.

Along the way, they get word that a refugee from Europe landed on the beach not far from where the dead body was found. He won’t talk to the military policemen who apprehended him and consider him a spy but he does, eventually, talk with Foyle.

These three strands, as you would expect, begin to converge. What makes this program utterly fascinating is how the war plays on every character in ways big and small. The story takes place in September 1940: France has fallen, the Battle of Britain has started, and the US is still not in the war. The volunteer firemen who loot bombed out houses consider their plunder extra wages for a job no one else wants to do. The man washed up on England’s soil is to be executed for being a spy, something he knows and accepts, even though he may not be a spy. Foyle’s own son is active in the service and he worries about him daily. The landlady accepts the bombing of her house as the price of war but cannot stand the theft of her late husband’s coins.

*In order to relate what I mean by my opening sentence, I will have to use SPOILERS AHEAD. If you’ve seen the film, keep on reading. If you want to be surprised, go watch this wonderful film and come back later and read my take.

Secrets play an integral part in this film. Lewes’s wife, Elizabeth, was Foyle’s first love but her father wouldn’t allow the marriage. That Foyle’s wife is not in the episode means he’s either a widower or a divorcee. No matter, he’s alone now and has to rebuff Elizabeth’s entreaties. I suspect viewers who watched this series from the beginning found these scenes particularly appealing.

The biggest secret lies with the American Paige and the dead man, Hunter. They were classmates at Oxford in 1922 and, together, they invented a new gear system. Paige returned to America, patented it as his own, and got rich. Hunter lost everything, and, eventually, his son’s respect. It was Hunter who approached Paige for blackmail money in the hopes that he could send his son to aviation school, something Hunter’s son wants but cannot afford. Eventually, it’s revealed that Paige pulled the trigger and the refugee—a cousin of Lewes’s wife—is the witness.

Where George Bush comes in is how Paige carries himself. He’s smug, he knows he’s important, and he knows he’s above the law. In more than one scene, he instructs his British driver to tell Foyle in no uncertain terms how vital the American's role is. You see, he has arrived in England for high level talks to find a way for the US to start delivering supplies to Britain as she stands alone against Nazi Germany (what eventually becomes the Lend-Lease program). If Foyle has his way, he’d arrest Paige for murder. But Foyle cannot have his way because to do so would jeopardize the delivery of fifty ships to Britain. If Paige is arrested, the scandal would kill any attempts for the US to help England, thus England would likely fall to the Germans. Paige is arrogant and knows he’s just gotten away with murder. But Foyle has the last word.

This film was released in 2004, a year after George Bush took America to war with Britain’s help. Regardless of what you think about the war, by 2004, Britons had soured on the war and Tony Blair, the British Prime Minister, ultimately paid the price. I could not help but see Paige in the movie as an avatar for George Bush and how the English see our president. The arrogant American gets away with murder while everyone else knows it.

Needless to say, I thoroughly enjoyed “Fifty Ships” and look forward to watching the rest of Foyle’s War. Other than the sterling performance by Michael Kitchen, watch these episodes for the history. We know and have learned the big history of World War II. Foyle’s War deals with the hidden part of war, the home front, and how people dealt with the consequences of that cataclysmic struggle in small, personal ways. At the very least, Foyle’s War can be a lessen for all of us in the fortitude we all need to keep during war or economic uncertainty or whenever bad times hit us. The darkness can’t last forever. It will be morning again someday. In the meantime, just keep on keeping on.
at November 04, 2008
Email ThisBlogThis!Share to TwitterShare to FacebookShare to Pinterest
Labels: Movies

wait a second...there's a movie version about this book? I can't believe it, I readed this book a long time ago and I don't know nothing about this movie, well next mission find it and watch it.

In early World War II Britain, as British soldiers and pilots valiantly resist the German forces on land and in the air, their kinsmen at home face head-on the effects of the awful war that has engulfed their nation. Food rationing, black-outs, German bombing raids, all these and more are daily reminders that no one is to be spared.

Yawn...I hate it when movie / television / theater reviewers feel so self important that they feel compelled to inject their ego into their assessment of a work of art. Normally, you see this in your local free city paper reviews, where the writer (normally a fresh out of college journalist) spends the first 5 paragraphs of a review droning on about some meaningless topic that has nothing to do with the movie they viewed (example: their pet peeves about sweaters or fast food).

You also see this self centered egotism arise in Scott Parker's review of the Foyle's War episode of Fifty Ships. Rather than assess the qualities of the acting, the plot or cinematography, Mr. Parker goes off on some rant about former President Bush.

The sad thing about the rant is that it does not even make sense as a historical point of comparison. He equates Mr. Paige (who is an American VIP in England to deliver war supplies to the British govt. at a time when England stood alone against Nazi Germany) with President Bush's involvement in the Iraq War.

Mr. Paige was an American who wanted the United States to join England in the War against Nazi Germany. I realize that Mr. Parker views President Bush as being arrogant, and should not have gone to war in Iraq. But in trying to equate President Bush with Mr. Paige, Mr. Parker unintentionally creates the perception that U.S. citizens who supported going to war against Hitler and fascism were wrong.

Next time Mr. Parker, please focus on telling what is good and bad about a movie, and keep your personal political opinions out of your reviews.

There is a factual inaccuracy in Scott Parker's review: the spy who is due to be executed is not the cousin of Lewes' wife, but the cousin of the wife of Lewes' near neighbour, a local doctor, who joins a dinner party thrown by Mr. and Mrs. Lewes in honour of Howard Paige.