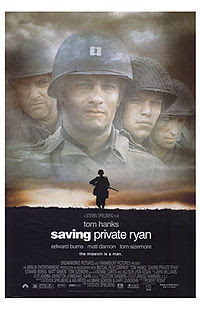 “Saving Private Ryan” should be required viewing for all Americans.

I watched the movie again over the weekend. I’ve lost count how many times; more than “The Dark Knight” but way less than “Star Wars.” It’s a difficult movie to watch for a variety of reasons: the violence, the loss of life, the sheer inexorable force of the government when it wants to do something. But it’s also an uplifting movie.

Now, ten years after it was released, “Saving Private Ryan” is a staple on cable television. If you are channel surfing and happen to catch a scene or two, chances are you’ll stop. It sucks you in, from the opening D-Day sequence, to the smaller scenes of Tom Hanks in that abandoned church, to the closing sequence with the German tank division. The movie is compelling. It’s drama at the highest stakes. But it’s only a movie. We know the outcome. We know who wins. Back in 1944, it wasn’t a sure thing. I think most Americans back in 1944, in their heart of hearts would say that they did think we’d win the war. But on June 6, 1944, as the news reports trickled in, it wasn’t’ a sure thing. Democracy was put to the test and democracy won.

What I really appreciate in this movie is all the little details Steven Spielberg got right. One important aspect—so obvious you could overlook it—is in the horrific opening scenes of the D-Day landing. When Tom Hanks’ Captain Miller gets on the beach, he asks another soldier who is in charge. That soldier, seeing Hanks’ captain’s insignia, tells him “You are.” Astounded, Hanks pauses, realizing that all the careful planning has been shot to hell. What he does, and what our real soldiers did, was improvise. Hanks gathers any and all men around him and figures out a way to get off the beach and take out the pill-boxes. Hanks’ character uses his brains. Tim Sizemore’s sergeant portrays the other aspect of pride we can have in our fighting men: the complete willingness to get up, stand up, and move forward against the enemy when every fiber of their being is telling them to seek cover until the bullets stop. Improvisation won the day on June 6, 1944. From there, anything was possible.

Improvisation played out during the remainder of the film as well. When Hanks squad finds Ryan, the private is unwilling to leave his post—guarding a bridge—and Hanks group decide to stay and help. The men improvise a defense plan, an attack plan, and a final last-man-out plan. And it very nearly works. Actually, it worked long enough for reinforcement to arrive.

All the actors in this film were great but Tom Hanks just shines above them all. And it's not for the loud, battle sequences. Pretty much anybody can do that. It’s for the quiet times where Hanks’ acting abilities excel. And not just in the small speeches his gives, like in the church when he talks about how many men he has lost under his command or the speech he gives when he reveals his civilian profession. It’s the scenes without words that Hanks really honors the real men who fought in World War II and any war. The scene after his medic dies (storming a German outpost) when Hanks goes off by himself and cries, always looking over his shoulder to make sure his men can’t see him. Hanks’ shaking hand is played out brilliantly through the film, never more so than when he has his men gathered around him and a map. Hanks tells them where they need to go and pulls out his compass for orienteering. One by one, his men see his shaking hand and, one by one, they make eye contact with each other. Finally, Hanks realizes what his men see in him and he makes a choice: he stands and tells his men to follow him. They do.

On this Veterans’ Day—90 years to the day since the guns fell silent in World War I—may we all pause to reflect on the real men and women whose hands shook but who marched forward anyway. Because of them, we can live in this glorious country in freedom and peace.

There are those among us Americans who take our freedoms for granted. They don’t know the sacrifices others made in order that we can live the lives we lead. To that end, one of the best things you can do is thank a veteran. Thank them for their service. Listen to them if they are willing to talk. Some are, some aren’t.

And let testaments like “Saving Private Ryan” remind us all that freedom isn’t free. We have to earn it. Our veterans, from Lexington and Concord to Baghdad, have earned our respect, our freedom, and our eternal gratitude.
at November 11, 2008
Email ThisBlogThis!Share to TwitterShare to FacebookShare to Pinterest
Labels: History, Movies

Nice choice for today. Nobody shines like Hanks in this sort of film.

Outstanding review. Well said. I'm watching it now and it really is one of the best WWII movies ever, if not the best.