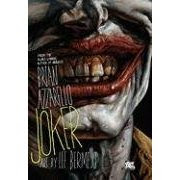 Of all the things Heath Ledger did for the character of the Joker, making the Clown Prince of Crime a thug tops my list. I’ll not go so far as to say that the comic book version of Joker was genteel. He was always a murderous character, more so in the last twenty-five years. But you always got the sense that the Comic Book Joker didn’t want to get his hands dirty. Sure, he’s shoot you but he’s leave it up to someone else to clean up the mess.

Not so with Ledger’s Joker. He’s a thug. He’s dirty. He’s vicious. And he’d just as soon stab you with a knife and have you bleed on his hand as shoot you. It was a characteristic of Joker that I welcomed. It’s the difference between noir and pulp. Pulp is fun, gritty at times, but, in the end, kinda light. Noir is dark, brutal, always gritty, seamy, unsettling.

With the new original graphic novel, Joker, that sensibility is alive and well. Joker is noir.

The graphic novel is about Joker but it’s also about Jonny Frost. He’s the narrator, a young punk who doesn’t know what he’s getting into when he agrees to go pick up Joker from Arkham Asylum. It seems someone thought the Joker cured and got him released. Wonder if that doctor isn’t an inmate in the asylum. Nonetheless, Frost picks up Joker and starts his crash course in revenge, Joker-style.

Another difference with Ledger’s Joker is his obsession with controlling the crime in Gotham. As that stack of money burns, Ledger’s Joker announces he controls Gotham now. In the comics, you never really got the sense that Joker was after power or control. He was just out to have some demented fun at everyone else’s expense. Azzerello’s Joker is, again, more in the Ledger vein than previous incarnations. Joker, upon his release, discovers that his organization has gone to the crapper. And he’s out to fix that situation no matter how many bodies pile up.

The first body is that of Monty, the man who is a lieutenant in Joker’s army who didn’t please the master well during the master's absence. Literally, Monty is skinned alive. Frost is shocked (as are we readers) but then Joker gives a little speech. And Frost is…awestruck. The artwork by Lee Bermejo is painted, not your typical four-color art. Every frame is beautiful despite its occasional grisly nature. The frame with a starstruck Jonny Frost tells more than an hundred words. Jonny Frost is in the spell of the Joker.

The story progresses as we watch Joker, Frost, and Harley Quinn (a stripper) go see various members of Gotham’s rouges gallery. “Killer” Croc is a big-ass black man with acne scars. Croc is drawn so huge on the page that it feels like the white frames surrounding the artwork won’t be enough to hold him in. Abner (aka Penguin) is the moneyman of Gotham, something Joker doesn’t have enough of and something that he craves. Two-Face is here and he seems to be as vain as Harvey Dent used to be before a punk threw acid on his face. He’s the big cheese, too. It’s all about Joker getting back what’s his from Two-Face. And the Riddler, er, Edward Nigma, is here and he’s, well, weird.

All this is to say that this is almost an alternate universe kind of thing but it speaks to what makes the Joker tick just as good as The Killing Joke (my review here) or other famous Joker-centric stories. There’s a few scenes of honest empathy if you’ll allow yourself to feel for a psychopath. In one crucial four-page sequence, Joker takes a broken bottle to the face of another thug, blows up a building, and then, is seen crying and hugging on Harley. This is almost as shocking as the violence.

If Joker’s involved, you just know Batman will eventually make an appearance. For the most part, however, he's merely a looming presence off-screen. To be honest, the way the story moves, I didn’t need Batman to show up. I knew he was coming...and I almost didn't want him to. Just as I enjoy the Gotham Central comics (featuring the police officer of the G. C. P. D.), I was quite enjoying all the criminals without the hero. But he’s called (you’ll never guess by whom and how) and dispatched. Quick as lightening, the story wraps up.

A bit too quickly for my tastes. The ending, while decent, wasn’t the gee-whiz ending of, say, The Killing Joke or The Dark Knight Returns or Branded Woman by Wade Miller. It was just an ending. It spoke to why the Joker was released from the asylum but never really answered the question why he was released. Unless the answer is in some subtext, I missed it.

Azzarello can do believable dialogue with the best of’em. It’s fun seeing these hardened, yet flamboyant criminals talk trash to each other. In a cast full of insanity, it’s even fun to read two of them joke about a third person:

Abner/Penguin: Someone is very sore at you.
Joker: Really? That’s wonderful news. I just like to make him sore. It’s what drags me out of bed.
Abner/Penguin: No, not him. Though I’m certain he’s not very happy about what you’ve been up to either. I’m speaking of Dent.
Joker: Harvey’s mad? Which one?
Abner/Penguin: Ha!
Joker: You think it’s funny, Abner?
Abner/Penguin: I think it’s a fair question. I don’t know how to answer it.

What about Jonny Frost? Well, let’s just say he’s us. He’s the “us” who looks at the movies and comics and sees all the havoc created by a man who looks like a clown and thinks “That’s cool. I want to be like the Joker.” Jonny Frost thinks that, too, at the beginning. He gets his first row seat to the madness that is Joker. Jonny looks into the abyss and makes a decision. It’s the most crucial decision of his life.

What this book boils down to, for me, is this: it’s a sequel to this past summer’s “The Dark Knight.” Visually, Joker is drawn as the perfect blend of Ledger’s Joker with the comic book Joker. Characteristically, he’s more Ledger’s Joker than the gentlemanly version from the comics. You get in the head of a killer. And you see things you never expected. Just be sure to go into the story with an open mind. It’s a good story and well worth your time.
at November 18, 2008
Email ThisBlogThis!Share to TwitterShare to FacebookShare to Pinterest
Labels: book review, Comic books

He's clearly a joker for the time we live in. When a character lends itself to reinterpretation, you have something.