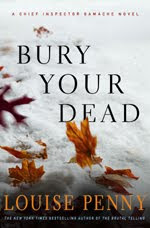 (This is the February 2012 edition of Barrie Summy's Book Review Club. For the complete list, click the icon after this review.)

My question was more mundane: what are some good modern titles and authors that follow in the traditional mystery style? Fellow Do Some Damage alumnus, John McFetridge, mentioned Penny's name as a good student of the Agatha Christie School of Mystery. Knowing my penchant for starting a series at the beginning, I junked that in favor of starting with the award-winning sixth book in the Chief Inspector Armand Gamache series.

Gamache works for the Surete du Quebec, the police force in Quebec. As the story opens, Gamache is recovering from wounds suffered during a police action. As a means to combat the memories and recover, Gamache is spending time with his old, retired mentor, Emile, and studying the circumstances surrounding the life and death of Samuel de Champlain, the founder of Quebec City. At the same time, Gamache is troubled by a past case. Based on the one question asked by a participant of this previous case--Why would Olivier move the body?--Gamache thinks he may have reached the wrong conclusion. If so, an innocent man sits in jail. To follow up on his hunch, Gamache sends his fellow officer, Jean Guy Beauvoir, also wounded in the same police action, to look into things in an unofficial capacity.

Naturally, Gamache finds a case of his own. Augustin Renaud, an idiosyncratic "historian" devoted to finding the lost burial site of Champlain's body, is found murdered in the basement of the Literary and Historical Society. Fearing that the death of an Anglo searching for the Francophone father of Quebec would raise too many eyebrows, Gamache is coerced into helping the local police search for the killer. Intertwined between the two cases Penny slowly reveals the true nature of the police action that wounded Gamache, Beauvoir, and others.

Penny weaves these three storylines effortlessly and with complete command of pace and prose. I found Bury Your Dead utterly compelling. It's an old-fashioned mystery, updated, but without the fast-paced trappings of conventional thrillers. There isn't a serial killer stalking poor victims with a dead body every forty pages. There is a death (Renaud) that is present, but the rest of the deaths appear off screen. I enjoyed that quite a bit. It left time for Penny to explore both Gamache and Beauvoir, their methods of investigation, and how each man copes with the aftereffects of the police action.

One of the tropes of the writing profession is that characters matter. You get a bunch of characters together, each with their own motivations, and have them bump into each other, conflict emerges and, with it, a good story. Penny does a remarkable job of giving the reader interesting, believable characters each with their own beliefs. As the story progressed, I started trying to guess the culprits because, you know, that's what's fun about a mystery. It's a testament to Penny's skill as a writer that she keeps most of her cards secret until the end.

I'm a historian and I really enjoyed the fourth thread of this story, the history of what happened to Champlain and the history of Quebec. Yes, it's mostly fictional, but it's presented in an understandably way. Loved this. That Gamache loves history pretty much guarantees that I'll be reading more of his stories in the future.

I so enjoy finding a new author or an author new to me. There's that first blush of discovery no wholly unlike the opening of a new relationship. I am happily excited to report that I have a new author to read and follow who writes an interesting character in Gamache--and Beauvoir as well. A new year dawns, a new author discovered. Wonderful way to start 2012.