Forgotten Books: The Secret of Terror Castle by Robert Arthur 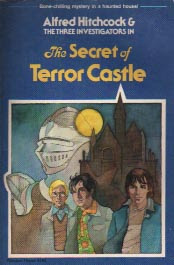 Nero Wolfe, some believe, is the offspring of Sherlock Holmes and Irene Adler. While that may be more fantasy than gospel—it’s the spirit of the two characters that links them together—then, in that spirit, Jupiter Jones is Wolfe’s grandson…assuming Wolfe even got near a woman long enough to, well, you know.

Who is Jupiter Jones? He is the leader of the Three Investigators, a series of juvenile mystery and detective stories created by Robert Arthur in 1964. A stout, stocky, but not quite fat boy, Jupiter is, in spirit, the youthful heir to Holmes and Wolfe. He is smart, deductive, somewhat off-putting, and prone to use big words. On page four, when Bob Andrews, one of Jupiter’s partners, is frustrated his mother cannot relay the message Jupiter gave to her, she replies, “I could remember an ordinary message, but Jupiter doesn’t leave ordinary messages. It was something fantastic.”

And that’s a good way to describe The Secret of Terror Castle, the first book of the Three Investigators series. The plot is fantastic—i.e., somewhat hard to believe but very fun, nonetheless—the situations the Investigators get themselves into are fantastic, and they find a fantastic patron, none other than Alfred Hitchcock himself.

Terror Castle has the boys—Jupiter (First Investigator), Pete Crenshaw (Second Investigator), and Bob Andrews (Records and Research) searching for a true haunted house in which Hitchcock can make his next film. The corresponding publicity surrounding the Investigators’ discovery—their only fee is that Hitchcock act the part of Dr. Watson and introduce their case—will launch their career as detectives. Or so they hope.

The Three Investigators center their attention on Terror Castle, the old mansion built by a famous horror movie actor named Stephen Terrill. It’s rumored to be haunted, ghosts have been seen, the pipe organ has played at numerous times at night, and no one has been able to spend the night in the house in over twenty years without running out the door screaming in terror. Perfect, thinks Jupiter, and he and his reluctant pals set about trying to prove that Terror Castle is, indeed haunted.

The boys, in groups of two, never all together, enter Terror Castle with flashlights, a camera, and a tape recorder. They are intent on scoring proof of the ghosts and the strange phenomena of anxiety attacks by previous visitors. Along the way, they find secret passages, dusty skeletons, and a visage of the Blue Phantom, the being who plays the pipe organ located within the castle. The Investigators get warned to stay away but they don’t. Until they uncover the truth.

One of the things I liked back in the day when I first read these books and again, this week, as I re-read Terror Castle, is the relationship between the boys. Jupiter is the smart one, often keeping certain deductions secret until their truth has been proven, not unlike Holmes and Wolfe. Pete is the athlete, the legman. His strength is in his actions provided he can stop being scared long enough to do the right thing. Bob is the studious one. He wears glasses, works part-time in a library, and wears a leg brace. Each boy gets a chance to shine and bring their special talent to the fore and help the team solve the mystery.

The reason I bring up Nero Wolfe is the method by which Wolfe solved crimes. He had Archie Goodwin do all the legwork and bring reports back to his New York brownstone apartment. At one point in Terror Castle, Jupiter hurts his ankle and has to remain bedridden for a few days. Thus, Bob and Pete are dispatched with specific instructions and Jupe, as the boys call him, disseminates the data. Pure Wolfe.

Jupiter is also Sherlock Holmes. He has theories about certain aspects of Terror Castle but doesn’t tell his two partners or the reader, allowing you time to assemble the well-laid out clues along the way. One of the nice little structures for these books is that the Investigators reports to Hitchcock himself at the end of the story. Thus, there is the artificial structure that doesn’t feel artificial where all the clues can be discussed in detail. And, in a fun way to end the last chapter with Hitchcock, the director himself entices their curiosity by telling them about a friend who has lost his missing, stuttering parrot. It just so happens that The Mystery of the Stuttering Parrot is the next book. Now that’s cool.

(I just realized something: Michael Chabon’s Holmes pastiche, The Final Problem, involves a missing parrot. I wonder if Chabon’s book isn’t also an homage to the Three Investigators?)

When I was a kid reading pretty much anything I could get my hands on, I discovered mysteries through the Hardy Boys. They were good and I enjoyed them (check out David Cranmer’s review last week for more on the Hardy Boys). But The Three Investigators were the ones whose stories and adventures I still remember. And I think I know why (and it’s not that their titles were cooler).

For one, they were my age, somewhere around 13-15. They couldn’t drive. They had to use their bikes or get someone to drive them. (In Terror Castle, Jupiter has won a contest, the prize being the use of a Rolls Royce for thirty days.) They were middle class. Jupiter was an orphan while Bob and Pete had families. They had chores to do and they always had to do them before going off on their adventures.

And they had Headquarters, a magnificent old mobile home hidden inside the junkyard owned by Jupiter’s uncle. HQ had hidden entrances and exits, a dark room, and other tools of the detective trade all made with things found in the junkyard. I loved their HQ so much, I built my own, complete with an entrance underground.

Re-reading The Secret of Terror Castle this week brought back some memories. I look forward to sharing them with my son. But the story itself is pretty darn good for an adult like me. It’s fast-paced and has more characterization than you’d expect. The POV is third person omniscient with Arthur in and out (and showing himself) of the heads of all three boys. But this does not detract from a splendid read and just a fun book.

Come to think of it, I may just have to read these books again before my son does.

P.S.
Here's an excellent website for lots and lots of good information about The Three Investigators in print and this website gives you some background on Robert Arthur.
at November 07, 2008
Email ThisBlogThis!Share to TwitterShare to FacebookShare to Pinterest
Labels: book review, Books from Childhood, Forgotten Books

I was introduced to The Three Investigators when I was eleven or twelve. They were nice companion pieces to The Hardy Boys at the time. It was also my first introduction to Alfred Hitchcock (I remember staying up one night to watch The Birds on the late show). The Investigator’s junkyard fort really impressed my young mind that I actually tried to build one of my own, a “tree fort” of sorts made of brush and pieces of wood that were laying on the ground -- yes, I was a country bumpkin!

A series I've never heard of. Thanks, Scott.