Like many a wordsmith, I've tried multiple ways to get a story out of my head and onto paper. I've outlined, planned, and written stories without and outline. I've even tried the index card method, but it has been a long time since I employed this method.

But I'm trying it again with my current book.

What is the Index Card Method?

The way I do it, one index card equals one scene. It's not necessarily a chapter a scene, but I know that some scenes will be long enough to be a chapter. I've read a few books in recent years that have something like 125 chapters and I know that every scene is a chapter. I'm not a huge fan of short-as-a-page chapters. I prefer to group them together into larger chapters. You? 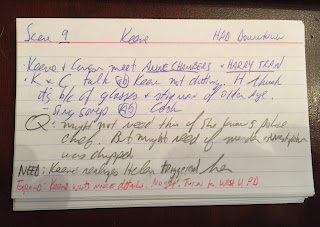 Anyway, the beauty of index cards is the ability to see the story laid out on your table or on a corkboard. You can lay them out any way you, but I've done mine this way just about every time I use this method. The scene number is in the upper left. The upper right is the setting, while the middle top line is the POV character. In this case, Keene is my main character.

In the body of the card, I list the action. I am using a blue ballpoint pen for the first time in forever. Not sure why, but I started that way and I'm running with it. Every time a character appears on stage for the first time, I use all caps and underline the names. You can see that listed here with a pair of HPD detectives.

For this card in particular, in pencil, I wrote a question to myself. It's a guide for my thinking about the story and whether or not this scene is actually needed. If it's not, I can discard and not bother writing it.

With the "NEED" comment, that's also a note to myself. When I get around to writing this chapter in a few days, I'll need to work in that little comment.

Every morning, after I've poured my coffee, I'll lay out the existing cards and move forward. I'm up to scene 27 so I don't necessarily have to lay out the first dozen scenes or so, but I lay out the last dozen. I'll follow my thought process and then start writing new scenes. I have a comp book in which I write additional notes, mainly about structure and overall thinking. Together, I have an ongoing mindmap-type thing that I can re-read along the way. Also, when this book is done, I can re-visit all my thought processes, especially if they veer away from the index cards.

Yeah, it can happen.

Do you use index cards? If so, how.

at September 19, 2020 No comments:
Email ThisBlogThis!Share to TwitterShare to FacebookShare to Pinterest
Labels: Writing process

A couple things occurred to me on Thursday when I heard the new Bruce Springsteen song, "Letter to You," from his forthcoming album of the same name.

The most obvious one was that there was a brand-new Bruce Springsteen song! Just a day after the rumor started, the official press release drops as does the first single. It is always a great day when there's a new Springsteen tune, especially in 2020 (a damn good year for music). It struck me, however, that this one was slightly different.

Not only was it a record with the E Street Band, but it was by an artist who had already reached the age of seventy. The Boss is seventy? Seriously? And then the video shows the entire band recording the songs for the album. It was like seeing old friends gathered again, smiling, laughing, working, creating, all in its black-and-white glory.

The song's lyrics are mature and nuanced, deep with emotion. Hearing them, reading them as they played across the screen, I'll admit to a bit of emotion. Not nearly as much as last year's "Hello Sunshine" debut, but it was there. Why? Well, the meaning of the lyrics, of course, but also the echo of a question I hated to admit at the time: how many more days will we have that feature a new Springsteen song?

He's seventy and the rest of the band ain't getting any younger. Unless Springsteen releases an album and unequivocably announces it is the last one, chances are we'll never know which day was the last to hear a brand-new Springsteen song. We'll be able to look back and note it, but not on that actual day.

I swept those thoughts away from the front of mind, but confess to thinking them and just relished the song.

Know what else made it special? The person I was with when I heard it.

I wake early every morning to work on my fiction writing, so I had already been alerted that the new song dropped. I had read the press release, seen the album cover, and read the tracklisting (which means little ahead of hearing the actual album). I was ready to hear the song. Last year, with "Hello Sunshine," I had listened to it about five times before my son got out of bed.

But on Thursday, I waited. My son, a college freshman, likes a few Springsteen albums and I know he'd want to hear the song before he drove to school. Well, *I* wanted him to hear it before school, so I made sure he did. Perhaps, on an unconscious level, the thoughts about The Boss not getting any younger played a role. I can't say, but I wanted to share the experience.

And it was all the more special.

It also made me think of all the other musicians, authors, and actors who I've grown up with. Some have already passed on but most of my favorites are still with us. Made me cherish them and their work all the more.
at September 12, 2020 1 comment:
Email ThisBlogThis!Share to TwitterShare to FacebookShare to Pinterest
Labels: Bruce Springsteen, Music

Recognizing Progress in Your Own Writing

Should I or shouldn't I re-read a completed manuscript before picking it back up again to work on it?

I debated with myself for longer than you'd expect, but let me give you a little backstory.

I wrote and completed the 1.0 draft a few years ago. I particularly enjoy the premise and the characters in this mystery/thriller. I remembered how the story started and the very end, but not a lot in the middle. I had vague memories but nothing crystal clear. Maybe it wasn't that good?

So a year or so ago, I attempted to write the story again *from scratch*. That is, do not read the old manuscript, but just rewrite the story. I changed some of the focus of the story, but ultimately shelved the 2.0 version in favor of books I've already published.

But I really like the tale. I decided it would be my Fall 2020 writing project. And that should I or shouldn't I question kept swirling in my head. On the one hand, were I to pick up the 2.0 version and just keep going, I might leave some cool stuff out that I didn't remember. Yeah, I know that if I don't remember something, it must not be memorable, but I don't subscribe to that idea. There are plenty of things about which I can remember my personal reaction but not quite the details. The end of Redshirts by John Scalzi is one.

I finally came down on the side of re-reading the 1.0 version. This was over 500 manuscript pages and, as of yesterday, I have about 100 pages left. Two things struck me.

One, there were indeed some cool scenes and moments in the book. I found myself actively reading and enjoying the story anew. I'm still time constrained in the mornings before work, and just about every day, I cursed the alarm that signaled it was time to get ready for the day job. I was into it and glad I decided to re-read the 1.0.

I read it with my yellow legal pad next to me, outlining the story as I read it. I noted POV, settings, character names, and general flow. All of this was in blue ink.

It was the red inked notes that told me just how far I've come as a writer.

These red notes are ones where I'd say "Need more description" in a scene where I'd introduce a character, but then give either a cursory physical description or none at all. I know, right? Other times I'd write "Need new option" when the 2020 me, reading the story, could see the next step a mile away.

The biggest thing I noticed was how easy the characters had it. In more than one spot, I'd have a challenge and the next thing I knew, they had solved it. Really? I mean, if I'm irritated that they had it so easy, you know other readers will fire off a 2-star review.

I'll finish my re-read of the 1.0 version this weekend. I'll follow through with a re-read of the 2.0 version (about 75 pages) and do the same outlining. Then, with my improved storytelling skills, I'll craft the 3.0 version.