Book Review Club: Gentlemen of the Road by Michael Chabon 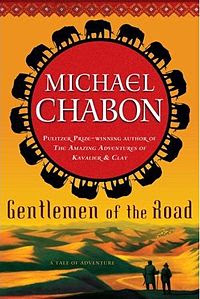 (This is the April 2012 edition of Barrie Summy's Book Review Club. For the complete list, click on the icon following this review.)

For the past two months or so, I’ve been in an adventurous mood, reading-wise. Starting with the lead-up to the John Carter movie, I read (or, in some cases re-read) the first five books of the eleven-book series. As much fun as the Edgar Rice Burroughs books are, I decided to give myself a little break.

Taking a cue from one of the film’s co-writers, I segued over to Michael Chabon’s Gentlemen of the Road. Known for his literary, whimsical writing style, this short novel is his homage to adventure tales and swashbuckling stories of the past. He name drops Michael Moorcock, Fritz Lieber, Alexander Dumas, and George MacDonald Fraser as inspirations. Chabon’s story follows two partners in the 10th Century Caucasus Mountain region and their exploits along their circuitous journey.

Zelikman, a physician, is a "scarecrow" whose blond locks frame his thin, sallow face. His partner, Amram, is a giant African who towers over all he surveys and wields a battle-ax with the colorful name of Mother-Defiler. They are partners, they are thieves, and they have been known to swindle folks with their charades and rouses, all as a part of their shiftless wanderings.

As the story opens, their latest charade proved profitable in coin, but not in baggage. An old, one-eyed Persian saw through the act and has made the gentlemen of the road an outrageously lucrative offer: escort Filak, a young prince of the Jewish kingdom of Khazaria, back to reclaim the throne taken by murder and expulsion. No sooner has the Persian made the offer than he is punctured by an arrow. The townspeople, now made aware of the scam perpetrated by the pair, chase Zelikman and Amram out of town. Unbeknownst to the pair, Filak has escaped with them.

Now, as charge of the young lad, the partners must make a decision: leave the stripling to his own affairs or return him to his kingdom. The choice proves challenging when they learn that the usurper, Buljan, is out to kill Filak. Knowing in their souls that they cannot abandon the young prince, Zelikman and Amram turn their faces to the treacherous task ahead: restore the young man to his throne.

Gentlemen of the Road is an interesting book, especially when placed in the bibliography of Chabon's work. A devotee of genre-based fiction growing up, Chabon grew to fame as a literary writer. With his 2001 novel, The Amazing Adventures of Kavalier and Clay, which took home the Pulitzer Prize, Chabon opened reveled in his love of genre. Gentlemen of the Road, along with his alternate history/mystery, The Yiddish Policemen's Union, are part of a string of tales in which Chabon writes the stories he used to love--and still does--to read.

Chabon has gone on record as lamenting how genre stories—-what, with their focus on simple things like, you know, plot and fun—-often get ostracized when compared to the more staid, “important” field of literary fiction. One of the obvious differences is writing style. When you pick up a Chandler detective novel or an Asimov space opera, you know very quickly what you are reading. In the same manner, if you pick up a literary novel, the word choice alone will indicate the type of book. Nothing wrong with this, of course, but it is a distinct difference.

But what about those books where the lines are blurred? Gentlemen of the Road has some action, sword fights, and other fun set pieces. Were this novel written by another person, the style and manner of telling would be quite different. But Chabon is the writer and, as such, you have a man whose natural tendency towards “literary” writing is actually crafting an action tale. Does it work?

For me, yes, partially. When the characters talk, they talk in the high style typical of a Chabon work or, to be honest, like Burroughs. Not necessarily all “thees” and “thous” but speech with flourish. Chabon’s style works great for this. Some of the action scenes, however, tend not to have the immediacy of a more dedicated genre writer. Where someone like Hammett would revert to shorter sentences to punch you in the gut with the visceral action, Chabon maintains his whimsical style. The language is still pretty, but the action is a bit hazy.

The characters themselves, Zelikman and Amram, are realistic, magical, and fantastical, all at the same time. While I have not (yet) read any of the Fritz Lieber Fafhrd and the Gray Mouser stories, I suspect that Lieber's mismatched pair of heroes was a direct inspiration for Chabon. Zelikman's melancholy and longing to return to his homeland is contrasted well with Amram's adventurous spirit that is also darkened by a tragic past. These two men are fast friends and they have a genuine care for one another.

Where my re-reading of Burroughs' Martian tales has swept up the nostalgic feelings I had when I was ten, Gentlemen of the Road satisfies another aspect of myself. It enables the adult reader to relish is a good story told well, but in a style that befits an adult reader. Kids and teenagers can enjoy this novel, but the adult, especially the adult that has seen many sunrises and moonfalls, will likely find a kindred spirit in one of these two men, what with their longing for their past as well as the keen desire to know what is over the next hill. It is my fervent hope that Chabon brings these two adventurers back for another adventure.