Here is the summary for August 2011.
See y'all back in September...

Welcome to the August 2011 edition of the Forgotten Music Project. As always, if I missed someone (or if someone joins in for the first time), I'll add you to the summary.

What Would You Do?

I think every writer around keeps a journal of some sort filled with ideas. I keep more than one, if truth be told, and a couple electronic ones, too.

Picture this: an idea you once had a year or three ago reasserts itself in your mind. You turn it over a few times, checking to see why, perhaps, it returned to the forefront of your mind. Satisfied that you might want to work on it again, you face a dilemma: do you re-read your old notes from way back when or do you charge forward, assured that either you will remember all the ideas you had about this topic the more you write OR do you let new ideas filter in? 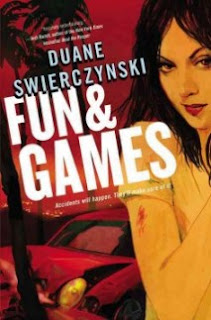 (This is the August 2011 entry for Barry Summy's Book Review Club. For the complete list, click the icon at the end of my review.)

Job I would not want: Person trying to classify a Duane Swiercznyski book.

Sure, “crime fiction” is a nice umbrella if you want to use it, but that doesn’t quite do justice to the types of books Swiercznyski writes. Okay, early books like “The Wheelman” are straight up crime-y things, but some of his more recent books—The Blonde, Expiration Date—are not. Put his newest hard-to-classify tale, Fun and Games, into the latter camp.

Charles Hardie makes his living an interesting way: he’s a professional house sitter. He’s also a former Philadelphia cop who is fleeing personal demons from the past. Only things he requires other than the paycheck are booze and old movies, preferably on DVD. His latest contract is the LA home of a musician who has been called away to Europe.

Lane Madden, B-movie actress and A-list druggie, is driving in the Hollywood hills. She, too, has demons in her past, as the tabloids are quite eager to exploit. Those headlights she sees following her? They’re getting closer. Thinking the driver will pass her, she stops (dumb move). She’s attacked, but escapes into the night.

Think these two stories tie in together? Natch. Hardie arrives at the musician’s home and the keys aren’t where they’re supposed to be. Long story short, he has to break in to said house only to be attacked by a woman who turns out to be Madden. She thinks Hardie’s one of Them. Notice the capitalization? “Them” are the Accident People, killers hired to off high profile celebrities and make the deaths look, well, accidental. Hardie doesn’t believe her, until some stuff hits the proverbial fan.

Job I would not want: People who clean up after bloody death scenes.

I’ve read enough Swiercznyski books now to know one of his patterns: many of his tales take place in a short timeframe. The Blonde, in book time, lasted about twelve hours, Severance Package even less. Fun and Games, if I had to count up the hours, maybe clocks in about a day, give or take. The brilliance of this technique—where a reader is halfway through a book realizing only then that only a few hours have passed for the characters—is the distillation of the action down to a science. Jumping in and out of characters’ POVs, Swiercznyski is able to describe the action with balletic grace, giving nuances to violence reserved only for slo-mo shots in action films. Speaking of action films, there’s a great moment when Madden, faced with her own death a few times, relies on all the training she did for her B-movies. Even as she’s kicking ass, she’s marveling (and thanking) all her hours of training.

I’m usually a slower reader, but reading a Swiercznyski breaks the curve. Fun and Games travels at such a high rate of speed that I was devouring this book in chunks, not chapters. And the pop culture references are a scream. It’s one of Swiercznyski’s trademark prose stylings to reference just about anything at a given point. Since he and I are roughly the same age, he knows what I know, and I love it.

Another fun aspect of Fun and Games was the setting. Swiercznyski’s a Philly guy, the City of Brotherly Love plays a vital role in his books. Fun and Games is a California novel. In the afterward, you learn the thing Swiercznyski experienced that triggered the germ of this story. I’ve only visited California a couple of times, but I seriously got the vibe from this book. Heck, now I want to visit again.

The Accident People. Now, this concept is scary, but, in Swiercznyski’s hands, they’re a little bit funny, too. Don’t get me wrong. They kill people, staging the deaths as accidents. But you get enough background here to want to know more about these guys. Best thing about the book: the cliffhanger ending. You see, Fun and Games is the first of a trilogy of Charlie Hardie stories. Usually, Swiercznyski’s characters are so beat to hell by the end of the book that any thought of a continuing series is moot. Well, Hardie gets his ass handed to him again and again, but he keeps getting up. Yeah, the book ends on a cliffhanger, but guess what? You get chapter one of Hell and Gone, the next book, as a bonus. (Checking the calendar) How long until October?

Classifying a Swiercznyski book: pulp fiction, pure and simple, just like they used to write back in the day. Guy and gal get into a bad situation and have to fight their way out of it. Are they gonna make it? Read and find out.

Job I do want: Reader of anything Duane Swiercznyski writes.

P.S. Once you are done reading, head on over to Do Some Damage's book club. We're chatting about Fun and Games this month.

For those of us who like old-school pulp fiction, antique stores are a treasure trove. They are real-life treasure chests to be opened, explored, and plundered, albeit with honest cash versus theft. The more I learn about pulp fiction, the more authors and titles I learn, and the more I keep an eye out for those hidden nuggets of pulp goodness.

Donald Lam and Bertha Cool are among those gems for which I constantly search. Honestly, I had never heard of them until I inherited a box of old paperbacks from my grandfather. Among all the westerns lay some Ellery Queen, Perry Mason, Mary Roberts Rinehart, and a couple from author A. A. Fair. According to the covers, A. A. Fair was the name Erle Stanley Gardner used to write the stories of Cool and Lam. It was then, on that day, I made a connection: Cool and Lam were the characters from the third book from Hard Case Crime, Top of the Heap. Since the Hard Case Crime books were my personal library for my pulp fiction self-education, my esteem for my granddad grew knowing that he had Cool and Lam in his library.

I read a few stories and quickly grew to love these characters and Gardner’s style (actually Lam’s since he’s the narrator). Thus, I made the decision to search for these old books, 29 in all. Here’s where the fun begins.

With the help of the internet, I could find each and every book I don’t have. I could have them all on my bookshelves in two weeks. But what’s the fun in that? I’m being honest here. How many times have you gone to a used bookstore, perused the shelves, and found a book by your favorite author? You know how cool that is, that feeling of the find? We’re all a little like Indiana Jones here, I think it’s safe to say.

I made the decision with the Cool and Lam books to find them myself rather than having them sent to me. There’s joy in the search. I had some of that joy over the weekend when I was down in Bill Crider’s neck of the woods, Alvin, Texas. There’s a great antique mall down there and one of the booths is filled with old pulp fiction. I’m talking Ace doubles (usually SF), old magazines, and the like. I found about five or 6 Cool and Lam books, including a first edition of Top of the Heap, the title Hard Case Crime reprinted. I pulled out my trusty list from my pocket—yes, really—and compared the titles on hand to the titles I still needed. Lo and behold, I found four I needed. (I also found a Day Keene book, Sleep with the Devil) A couple of them—Crows Can’t Count (#10) and Fools Die on Friday (#11)—brought me up to eleven the number of titles I have in a row. With only 29 total books and no one writing anymore, I have also made the decision to read them slowly, savoring each one, and, while I’m at it, read them in order.

The thing I’m coming down to is this: I bought #10 and #11 (and the Keene)…and put the others back. That leaves 13 vacancies on my bookshelf, but that also leaves 13 times in my future where I’ll have the joy of the find.

*Bonus to you readers who recognized the name of the antagonist from Richard Connell’s “The Most Dangerous Game” who let his prey evade capture twice before the ending.