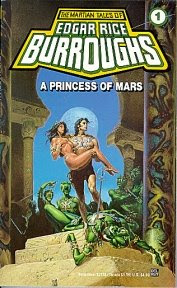 (This is the March 2012 entry in Barrie Summy's Book Review Club. For the complete list, click the icon at the bottom of this review.)


In the run-up to the new Disney movie “John Carter,” bowing this Friday, the guys in my science fiction book club decided to read (or re-read as the case may be) the first two books in the John Carter of Mars series by Edgar Rice Burroughs: A Princess of Mars (1912) and The Gods of Mars (1913). Me being the completest person that I am—and because the second book ended on a cliffhanger—I forged ahead and read the third book, Warlord of Mars (1913-1914). After nearly 600 pages of action and adventure, one question still puzzles me: how the heck do you have a sword and all hosts of aliens and monsters when you’re naked?
To be honest, as I re-read Burroughs’ Martian tales—A Princess of Mars was his first book, pre-dating Tarzan by a few months—I kept an eye out to see if the characters really did wear loin clothes, robes, or what. Turns out no one wears clothes. Strange Martian custom. But, then again, strange was the way our hero, John Carter, found his way onto Mars.
A Civil War vet, Carter and a friend found a gold lode in the mountains of Arizona. There’s a problem, natch: Indians. They kill Carter’s friend and come after him. He’s holed up in a cave, waiting to go down with guns blazing when a strange thing happens: he becomes paralyzed. He hears the Indians approach the cave entrance…and then turn in fear. Great, thinks Carter, whatever scared them is behind me and I can’t do anything about it. Turns out, the thing behind him is…himself. He’s some sort of phantom and, before he knows it, he ‘wakes’ up on Mars. There’s little in the way of actual scientific facts regarding how Carter “teleported” to Mars, but that’s really okay. The book isn’t about science. It’s about battles, honor, bravery, and love.
And he’s Superman. He can leap tall buildings (most of the way) in a single bound. His strength is beyond that of mere mortal Martians. Lucky for Carter the Warrior the first beings he meets, the Green Men of Mars (huge hulks (heh) that stand nearly fifteen feet tall with a set of intermediary limbs below the arms and above the legs) only speak War, Bravery, and Combat Prowess. He woos them, even though he’s ostensibly a prisoner.
A Princess of Mars is basically a travelogue of Mars. Carter learns how Martian (Barsoomian in the language of the natives) babies are born, how naval vessels fly through the air, how the thin Martian atmosphere is treated, and how water is preserved on a planet without any surface water. Along the way, he doesn’t even bat an eye that he, and everyone else, is naked. That would include Dejah Thoris, the princess of the book’s title. She is captured after a battle and Carter falls for her. Well, of course. She’s naked. The rest of the book is his attempt to return her to her land and her people usually with many valiant sword fights and battles. 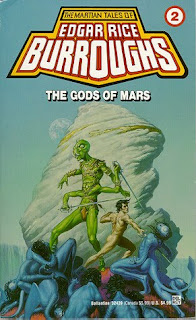 The Gods of Mars picks up ten years after the events of the first book when Carter returns to Barsoom. He saved the day at the end of the first book and mysteriously returned to Earth. Upon re-materializing on Mars, he finds himself in the Valley Dor alongside the River Iss. What makes this particular location treacherous is that Dor and Iss constitute the Martian afterlife. Think about the end of the Lord of the Rings when Frodo and Bilbo sail off into the sunset. No sooner is he back on Mars that he’s doing battle with heretofore unknown plant men, his friend Tars Tarkas (natch) by his side. Through battles, more battles, captivity, escape, more battles, Carter learns more about the religion of Mars, the deception that has been going on for ages, and that his beloved wife, Dejah Thoris, believing Carter dead, has taken the pilgrimage to the valley. What would a Carter/Mars novel be without a princess that needs saving? Not much fun to read, if you ask me. Along the way, Carter assembles allies (his discovers his son in held prisoner *in the very same prison* he land in…of course!) and enemies, charging ahead when mere mortals would think twice. Finally, he reaches the side of Dejah deep underground at Barsoom’s southern polar region only to have her snatched away again in the books final pages (natch). 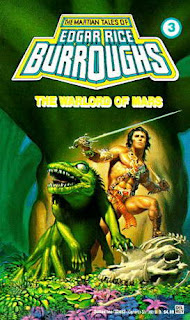 Warlord of Mars picks up where Gods of Mars ends. Dejah, her staunch comrade, Thuvia, and enemy, Phaidor, all are captured inside a giant temple, the only door of which opens once a year. Oh, and the last time he saw his princess, Phaidor, knife in hand, had launched herself toward Dejah. Carter manages to follow his three main arch-enemies as they secretly rescue all three women only to escape…again! The bad guys fly literally all the way to the top of Mars, with Carter and a new ally, Thuvia’s father, chasing them. More battles, more heroics, more monsters and history of Barsoom ensue.
Let’s not go too deep here. These books are pure, unadulterated fun. Burroughs’ books and stories inspired countless creators of science fiction literature and films throughout the twentieth-century. There were a couple of places where you could see directly how George Lucas was inspired. At one point, Dejah is taken before a giant, ugly monstrosity. Jabba the Hutt and Princess Leia anyone? Speaking of Leia, I think we all know what she told Darth Vader in the first Star Wars movie. Come on. Do I have to quote it exactly? “I am on a diplomatic mission to Alderaan.” Now, cut to this exchange between Dejah and her captor from the first book:

"And the nature of your expedition?" he [bad guy] continued.
"It was a purely scientific research party sent out by my father's father, the Jeddak of Helium, to rechart the air currents, and to take atmospheric density tests," replied the fair prisoner, in a low, well-modulated voice. "We were unprepared for battle," she continued, "as we were on a peaceful mission, as our banners and the colors of our craft denoted."

Of course, I see Star Trek in there, too. And Avatar. And Fern Gully. And Dances With Wolves. In fact, my biggest fear for the movie is that folks who don’t know will just think that “John Carter” ripped off Avatar, not realizing that Avatar ripped off Burroughs first.
The remnants of Victorian prejudices still color Burroughs’ characters. The Green Men of Mars basically are communists. They all live together each person owning nothing individual. One exception is Dejah herself. Like Leia and other damsels, yes, Dejah’s in distress but she holds her own, even helping out Carter a couple of times. It speaks to her character and the fact that Carter doesn’t put up a fuss makes him a better man for it.
This first three books in the eleven-book series is really a trilogy, meant to be read in order. Not all feature Carter and Dejah—I’m reading book #4 now which stars Carthoris, the son of John Carter going after *his* captured love (natch)—but Mars is the real featured player in these stories. Well, that and all our eleven-year-old imaginations that still live within us. I first read A Princess of Mars over thirty years ago and it is one of the few things in which I can literally transport myself to a younger time. In re-reading these stories, that magical time of discovering once again visited me. I’m hoping the movie will do the same.
Yes, there are flaws in these books: yes, a princess is always needing help; yes, there are coincidences that boggle the mind; yes, Carter can come across too good to be true. But logic is not why you read books like these. When you crack these covers and join John Carter on his adventures on another world, you will soar to the heavens with great abandon, losing yourself amid epic tales of heroism and courage, adventure and love. And let’s be honest: isn’t that one of the reasons you read books anyway?
at March 07, 2012
Email ThisBlogThis!Share to TwitterShare to FacebookShare to Pinterest
Labels: book review, Book Review Club, Books from Childhood, Edgar Rice Burroughs, Pulp heroes, SF

I am betting the movie will skip the travelogue parts and be all action. Or at least the trailers look that way.

I love these books. Reading the John Carter of Mars series as a kid got me through the 45 minute bus ride from hell. And there are some silly and dated Victorian mores, but if you can look past them (much like ignoring Lovecraft's rascism) it's such a marvelously fun ride.

About the trailer, Patti, depends on which one you've seen. The current trailers are all cut to emphasize the action. The first trailer I saw (months ago) focused on the setup, the mystery and the wonder of Mars.

AS I've said, this genre is about pure adventure and fun in it's most basic level. Loved these books and that's what I hoped to capture with the Taleran books, although I tried to have fewer coincidences. :)

Great review, Scott. After seeing the movie previews, I was wondering what John Carter was all about. Now that I know the background, I can defend John Carter against any critics who think the movie ripped off Avatar and/or Star Wars.:)

I would love to trade in one of my book clubs to be in a science fiction book club for a while. Also, if I ever do see Disney's John Carter, I absolutely would have thought it derivative if you hadn't set me straight first. Interesting review, thanks.

Wow. I learned a lot in this review. And there's something to be said for the author who throws caution to the winds and just writes a great adventure. Thanks, Scott.