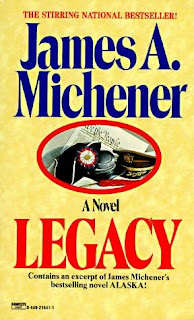 When you think of the novels of James Michener, most likely you’d come up with an image of the brick-like tomes he produced over his long career. Heck, as Hurricane Ike bore down on Houston in September, I joked that we could use some Michener novels to protect the house. I make light of a serious thing only to illustrate that Michener’s historical novels are physically huge, incredibly researched, and focus on multi-generational sagas. When describing a Michener novel, any of them, really, I tell folks that the first line of the book is usually “And then the earth cooled.”

All of this is to say that, ironically, my favorite Michener is his shortest: Legacy. Written and published in 1987, Legacy focuses on Lt. Col. Norman Starr of the U.S. Army, his wife, Nancy, and his West Point buddy-turned lawyer, Zach. It’s the weekend before Norman is set to testify before a Senate committee looking into the Iran-Contra affair. Norman’s clean on Iran but not on Central America. If he speaks the truth when asked about his activities helping the Contras, Norman will likely do himself some serious damage.

The three of them meet over the weekend to map out Norman’s strategy. In doing so, Zach prompts Norman to talk about the Starr family, present at important points in American history. The book was originally published in 1987, the bicentennial of the U.S. Constitution. That document’s creation and interpretation is the heart of this short novel.

Jared Starr (1726-1787) fought in the Revolutionary War after signing the Declaration of Independence. In the years since Yorktown, Jared and Alexander Hamilton exchanged letters about the need to scrap the inept Articles of Confederation and make something new. The two patriots knew that if they openly called for creating a new government, they would get nowhere and the new republic would wither and die on the vine. Thus, Hamilton, with Jared’s help, devised a plan to assemble other leading men in Philadelphia in May 1787 officially to amend the Article but, in reality, create the new government. Jared died of gunshot wounds sustained trying to keep peace after Shays’ Rebellion in the winter of 1786-87. His son, Simon (1759-1807) took his place.

In this manner, the history of America and the Constitution is related via the prism of the Starr family. Simon Starr was instrumental with James Madison in crafting the new Constitution. Justice Edmund Starr (1780-1847) sat on the U.S. Supreme Court, said hardly a word, but reliably voted with Chief Justice John Marshall all the time, especially in the McCulloch v. Maryland case. General Hugh Starr (1833-1921), a Virginian, freed his slaves just before the Dred Scott decision but fought next to Robert E. Lee all the way to Appomattox. Emily Starr (1858-1932), Hugh’s daughter, proved to be an early suffragist who was present when the Tennessee legislature voted to approve the 19th Amendment, giving women the right to vote. Richard Starr (1890-1954, Norman’s grandfather) hated FDR with a passion, thinking the New Yorker a commie. Rachel Denham Starr (1928-; Norman’s mom) crusaded to get state legislatures to reapportion along more equitable rules, leading up to the Baker v. Carr Supreme Court case.

The crux of the entire debate about Norman’s extended family was whether or not Norman would show up at the Senate, decked out in his best military uniform, and take the fifth. It isn’t until the last chapter, the one that bears Norman’s name, do we find out the answer.

You can see Michener’s political bias in this novel. It’s conservative, not Republican but also, liberal, yet not Democratic. When discussing the creation of the Constitution or the campaign for women’s suffrage, Norman’s ancestors acted in a liberal manner. When the story gets around to the Civil War or FDR, the ancestors tend to be more conservative. When you put the two together, Michener’s book is a good example of the flexibility of our living Constitution. When times demand it, our Constitution allows extra powers to solve a problem. When the crisis is over, the Constitution contracts and brings things back in line. It’s one of the obvious yet fundamental truths of our system of government.

Michener’s prose style is plain. Heck, this short novel is basically a civics lesson more than a novel, an extended essay with walk-on characters. An appendix reprints the Constitution, the then-twenty-six amendments, and the proposed 27th, the Equal Rights Amendment. Ironically, Michener doesn’t note the drive in the 1980s to ratify what is now the real 27th Amendment concerning Congressional salaries. The amendment was put forward in 1789 as part of the original twelve amendments (ten of these are now the Bill of Rights; the original text of the twelfth can be found here) by James Madison, the future fourth president.

Legacy is a fun little book, an easy one- or two-evening read. Looking back, it was the first book I read to incorporate the Founding Fathers in a fictional context. I loved it. I loved that historical figures could live and breath and interact with fictional characters to bring history to light. Probably why, in retrospect, I wrote a novel with Harry Truman.

As we get ready to celebrate a new president and vice president, it’s good for us Americans and the world to see the peaceful transfer of power as a vital sign of our thriving, yet imperfect democracy. It is a nation composed of people who make decisions and have to live with the consequences, no matter what. The Starr family of Legacy is a good example of living with mistakes and triumphs. There are patriots in the Starr family and there are those who bucked the system. Norman didn’t particularly appreciate every forbearer of his family but he did learn from them. With them looking on, he makes his choice.

In the coming days and weeks of the transition or whenever you need a little patriotic pick-me-up, find a copy of James Michener’s Legacy. It’ll make you proud to be an American.
at November 14, 2008
Email ThisBlogThis!Share to TwitterShare to FacebookShare to Pinterest
Labels: Friday's Forgotten Books

Nice to see Michener remembered. He was "it" in my youth.

I know what you mean by his books being physically huge. My brother-in-law was a big fan and it seemed like just a few Michener novels covered the entire book shelf. I remember reading Space years ago but don't remember much about it now... Legacy sounds very interesting.

Sounds like a book that I would enjoy. I've read 'Centennial' but that's as far as I've got with Michener. Just liked the way you 'sold' the book.

You are absolutely right. When I think of Michener, I think of heavy thick books!

Scott - my brother-in-law gave me Legacy to read on Sunday morning and I finished it in a day.

Interesting in our day when people are saying all sorts of things about the President, according to Richard Starr (1890-1954) FDR was a communist. The split in the West Point classes before the Civil War is well-described in the chapter on General Hugh Starr (1833-1921) along with the impact of the Dred Scott Decision. Even the Supreme Court can make terrible decisions, which require a Civil War and several years more to fix the law.

As you point out, our government is not perfect, neither is the Constitution. However, it is the best document ever produced to govern a country; we are truly blessed to live in the country where it was written and defended for over 200 years by the blood of our forefathers and patriots.

I truly relished this book! This was my first Michener novel and I plan on reading many more. The book did an excellent job of portraying the events of history. One may think that a novel involving history would be very dry and uninteresting. This one will prove those people wrong. A lot of American history with a twist of a modern-day tale proves to be entertaining.