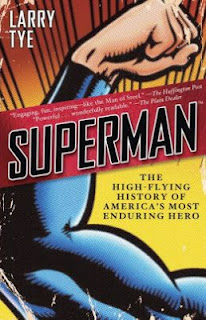 (This is the June 2013 edition of Barrie Summy's Book Review Club. For a complete list, click on the icon after this review.)


Without a doubt, the new Superman movie, Man of Steel, is the one movie I am most looking forward to this year. To help do what I always do--immerse myself in a property--I’ve been reading my old Superman comics, enjoying Superman: The Animated Series episodes, and watching the older movies. I was happily surprised to discover that there was a history of Superman just waiting to be read. Perfect timing.

Larry Tye’s Superman: The High-Flying History of America's Most Enduring Hero was published in 2012 and it tells the story of Superman from his creation by Jerry Siegel and Joe Shuster all the way up to the Man of Steel movie which, at the time of publication, was “the new Superman movie next year.” The story of Kal-el and his handlers is a microcosm of 20th American history in general and the comic book industry in particular.

I’ve always been fascinated why and how the 1930s produced such a wide variety of heroes. I’m convinced it’s a product of the times, when dire economic times and the worry it produced created a yearning for honest-to-goodness heroes with a firm moral code and little or no gray to their characters. You know: they guys who always wore the white hats. When you look at the all the parts of the “pulp soup” that was being mixed in this decade--Doc Savage, The Shadow, The Green Hornet, John Carter, Tarzan, and more--it’s pretty simple to think that someone like Superman would be created. In fact, it wasn’t until I started reading the Doc Savage novels that I discovered that some of the Superman tropes--his first name, the Fortress of Solitude--were lifted straight from Lester Dent’s imagination. It’s a wonder he didn’t sue. As a writer myself, it’s kind of nice to read that it took the pair six years to land a publisher. Perseverance pays off!

In this modern age of consumerism, it was eye-opening to learn just how many things Superman has sold. With tongue firmly in cheek, Tye even labels one of his chapters “Superman, Inc.” with a familiar refrain of “Ka-ching” throughout that chapter. Not sure why it surprised me, but it did. Speaking of superheroes selling things, am I the only one who misses the little one-page ads where Superman, Batman, or Spider-man would catch the crook because the evil doer was seduced by a Twinkee?

Speaking of seducing, the chapter on the 1950s crackdown on comic books was also quite interesting. From my own knowledge of the medium, I knew that it was the crime and horror comics that fed the fire of Dr. Fredric Wertham’s Seduction of the Innocent, the book and movement that strove to bury the comics industry by pinning all of society’s woes on the exploits of people in comics. Makes me wonder what he’d make of the internet...

As someone who grew up in the Bronze Age of comics (roughly 1970 to 1986), I have always enjoyed the zaniness of comics. Granted, some of that zaniness was gone by the mid 1970s, but it was interesting to learn how Mort Weisinger, editor at DC Comics and Superman titles in particular, actually went about consolidating the Man of Steel and all that goes with him. It was so wide and varied that the mid-1980s event, Crisis on Infinite Earths (the comic book story that shrank all the parallel Earths down to just one) was destined to happen.

There’s the legal stuff, too. Siegel and Shuster basically sold their most famous creation for $130, losing control of the thing that generated billions. Yes, it was a business and businessmen do what businessmen do, but it’s still a shame. From these two all the way up to Alan Moore in the 1980s, comic creators often found themselves on the short end of a dollar bill. Tye even goes into some detail and explains why the new movie is being released this year.

And I learned the names associated with Superman and the 75 years of his history. That’s a real benefit , so much so that, a few weekends ago at Houston’s Comicpalooza, I found a few old Superman titles in the $0.25 bin (!) and bought them based solely on the authors of the tales. I also met Kevin J. Anderson and picked up an autographed copy of Enemies and Allies, his novel in which he reimagines the first meeting of Superman and Batman in the 1950s. And, if you are still in the Superman mood, you can always read Tom DeHaven’s “It’s Superman” (my review).

Oh, and there are some comics to read, too. Seventy-five years worth of comics. Not all of them are good, but some are great. Some of my more-recent personal favorites are All-Star Superman by Grant Morrison and Frank Quitely and Superman: For All Seasons by Jeph Loeb. All-Star Superman has been made into an animated movie, but I suggest you read the books. It spends much more time in this one-off story. I love it so much that I am tempted to say that it’s the best Superman story in the last 25 years (easily) and ranks as one of the best of all time.

So, after you see Man of Steel and are curious about the history of the Last Son of Krypton, read this book. You will certainly enjoy it.