A common writerly thing we tell ourselves is that inspiration for a story can come from just about any place and at any time. You know what else can come from those same mysterious places? The desire, the push you might need to get one's butt in a chair and write.I don't know if y'all ever experience this, but, at times, watching my current favorite TV programs (Castle, Elementary, Grimm, Body of Proof), at some point during the broadcast, two things usually happen. One, the realization that I should probably be writing. I let that one slide, typically, because we can't be a writer and/or writing all the time. Two, I get inspired to go write. I enjoy those shows for their creativity, their structure, and their characters that it can prompt me to take notes about my characters or stories or dash to the keyboard and fire out some pages of my own characters because I enjoy them coming to life as much as I enjoy watching Castle, Beckett, Holmes, or Nick Burkhardt come to life and do their thing.That kind of inspiration is, I think, typical of all of us writers. What may not be typical is getting inspiration from as unlikely as source as a podcast about Batman. Kevin Smith has, since last year, created a podcast devoted to his love of the Dark Knight. Naming it "Fat Man on Batman," each week (more or less) is an episode devoted to one or another aspect of Batman's history. With this venture being an audio-only podcast, naturally, the only thing we have is the interview itself, the voices of Smith and his guests for that has been the way Smith talks about Batman. His guest list has run out pretty wide, even though it is probably more Batman: The Animated Series heavy. For any Batman fan out there, I cannot recommend this show enough. It has been the weekly thing that I most look forward to. I download and put on my iPod as quickly as possible. The depth and breadth Smith and his guests take the adventures of Batman is inspiring. It will confirm things you already knew, reassess things you thought in a different way, and make the entire experience of watching and reading Batman fun again.But that's not all. What comes across in your ears is passion. There is a passion for the material, certainly. How can you even think to have a podcast if you hated something, right? It's become something of a joke now, but many of Smith's interviewees bring the big man to tears. If it's not tears that are forming in Smith's eyes (and voice), then it's awe. All too often, the guests--who have ranged from Mark Hamill, Paul Dini, Bruce Timm, and Kevin Conroy (Batman: TAS) to Kyle Higgins, Geoff Johns, and Grant Morrison (comics)--convey their thought process behind a certain episode or issue or way of thinking about Bruce Wayne and his rather odd outlet for his childhood tragedy. Each time, Smith just sits in stunned amazement, comprehending something he thought he knew and seeing it in a new way. The same for us listeners, too.Just like the old days when you were limited by the number of comics you could put in a box and take with you on vacation and you read those same issues over and over, these podcasts are like that. I've listened to most of them twice, so enjoyable are the conversation and the topics. But each time, I am prompted, nee I'm pushed by an uncompromising force to get to my Mac or pen/paper and *create*. It is the strangest thing. You'd think that I would start writing my own Batman story or jump back to an episode or an issue and re-read. I do that, but not initially. What I end up doing is want to create my own beings and put them through the motions of their lives. I want to bring the passion for my own material that others bring to Batman. I already have the passion for my projects--why else would I be writing them?--but sometimes, this podcast is like icing on the cake. It is a wonderfully unexpected consequence to listening to theses podcasts.Is there something you do that brings unexpected creativity to your writing?
at March 09, 2013 No comments:
Email ThisBlogThis!Share to TwitterShare to FacebookShare to Pinterest
Labels: Batman, Creativity, Grimm, Kevin Smith, Podcasts 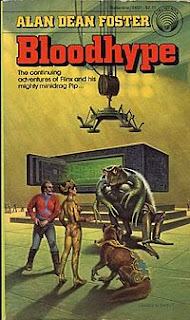 (This is the March 2013 edition of Barrie Summy's book review club. For the complete list, click the icon at the bottom of this review.)

Sometimes, you're mother is really correct.

Bloodhype is Alan Dean Foster's second published novel. Published in 1973, it is part of his Humanx Commonwealth, his version of the future where humans and Thranx (insectoid aliens) have created an alliance and spread their influence across this arm of the galaxy. The enemy of the Commonwealth are the Aann, spacefaring reptiles that are not unlike the Klingons. Well, to be honest, the Thranx are not unlike the Vulcans, but there is much more to the universe than the inspirations from Star Trek.

The titular substance, bloodhype, is a drug that, according to the dust jacket, is instantly addictive. Vanished from the galaxy for years, an improbable pair is assigned the task of tracking down its reappearance on the planet Repler: a young human woman (Kitten Kai-sung) and a furry raccoon-like thing (take a look at it up on the cover). Naturally, they meet up with a captain of a shipping freighter, the latter being the one who inadvertently discovered the presence of bloodhype.

Their investigation runs alongside the sub-plot of the Vom, a creature that is like a ebony blob. In my mind's eye, I kept imagining a sentient oil slick. The Vom is stranded (imprisoned, actually) on a dead planet, and yet the Aann remove it to Repler. It doesn't take a genius to imagine that the Vom, bloodhype, the trio, and the bad guys will all mix and mingle with various results.

Another pair of characters also make an appearance: Pip and Flinx. Foster's first book, The Tar-Aiym Krang, is the debut appearance for his most famous creations, Flinx and his flying snake, Pip. I bring up this fact because Foster had originally intended to make Bloodhype a stand-alone novel set in the universe, but the publisher prompted the author to include Pip and Flinx in the novel. Foster complied, but the Pip and Flinx don't really act like the versions you see in the first book. Turns out, after Foster wrote twelve more books featuring his famous duo (fourteen total), that the events of Bloodhype occur in the eleventh position. Rather odd, if you ask me.

Bloodhype is a decent book, especially if you can wrap your head around the fact that it really isn't a Pip and Flinx Adventure, but an adventure in which the pair make an appearance. The Tar-Aiym Krang is a much better book (and is part of a trilogy along with Orphan Star and The End of the Matter).

The reason I bring up my mom is this. Foster was my first favorite SF author when I discovered the genre back in the late 70s. At that time, there were only four Pip and Flinx books: the  aforementioned trilogy and Bloodhype. One day (probably at the B. Dalton in Westwood Mall in Houston), I took Bloodhype to my mom. She had to review and clear books for me if they weren't YA. She read through it, cleared it for me, but told me that I probably wouldn't enjoy it. My young self certainly would not have enjoyed it--in fact, I never read it back then. My fortysomething self am glad I've read it--being the completist I am--but I doubt I'll ever re-read it (as I have the trilogy). Moms: they really know their children, huh?