Lillian Saxton made her debut in Wading Into War when she hired private investigator Benjamin Wade to find a missing reporter with knowledge of her brother’s whereabouts in Europe torn apart by World War II. Now, Sergeant Lillian Saxton, U.S. Army, stars in her own mission.


Sergeant Lillian Saxton receives a cryptic message from an old flame: meet me in Belgium and I’ll not only give you the key to the Nazi codebooks but also information about the man who murdered your brother.


Lillian conducts her missions for the Army with panache and confidence, even when bullets start to fly and enemy agents zero in to kill her. She’s more uncertain of how she’ll react when she sees the man who broke her heart or how she’ll get out of Belgium when the Nazis launch their invasion.


Lillian Saxton #1 will be published May 2016. Check back often for more excerpts.


at February 16, 2016 No comments:
Email ThisBlogThis!Share to TwitterShare to FacebookShare to Pinterest
Labels: Lillian Saxton

Well, I didn't get a chance to finish a book review for this month's edition of Barrie Summy's Book Review Club (Book Launch activies), but that doesn't others were not successful. Click on the icon and head over to Barrie's site to get the full list of reviews.

ALL CHICKENS MUST DIE: Now Available

Today is Book Launch Day for ALL CHICKENS MUST DIE.
Synopsis: 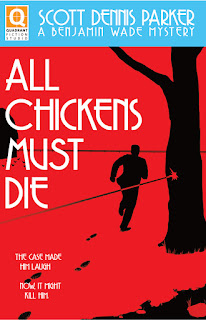 May 1940, the last days of the Great Depression, and private investigator Benjamin Wade isn’t exactly rolling in the dough. He doesn’t even have a secretary. So he’s in the unenviable position of taking any client that walks in his office.

Elmer Smith, a local farmer, has a problem: all of his chickens are scheduled for slaughter. He’s desperate to save his livelihood. He got a court injunction to slow the process, but time is running out.

Instead of laughing Smith out the door, Wade suppresses his pride to take the case. It seems like a simple, straight-forward paycheck. He zeroes in on a central question: What really happened the night police chased someone through Smith’s farm? Wade isn’t the only one asking that question, but he could be the only one who might die for it.

[Other venues arriving shortly.]
at February 02, 2016 No comments:
Email ThisBlogThis!Share to TwitterShare to FacebookShare to Pinterest
Labels: Benjamin Wade

ALL CHICKENS MUST DIE: Chapter 1

(As a treat, here's Chapter One of ALL CHICKENS MUST DIE: A Benjamin Wade Mystery. It goes on sale tomorrow at Amazon and Kobo. Other venues forthcoming. The paperback will arrive later this month.)