Book Review Club: Emperor Mollusk Versus the Sinister Brain by A. Lee Martinez 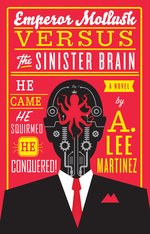 (This is the May 2012 edition of Barrie Summy's Book Review Club. For the complete list, click the link following this review.)

I've been reading a lot of fun books during the early part of 2012. After a wonderfully engrossing reading of Bury Your Dead by Louise Penny, I charged into the Martian tales of Edgar Rice Burroughs with my SF book club. After a brief stop with Michael Chabon, I ended up with an author I've been wanting to read for two years now and, finally, came around to: A. Lee Martinez.

Martinez is a fellow Texan who clearly is inspired by all the over-the-top, fun SF and fantasy stories from the past. I'm thinking the John Carter stories, the Tarzan stories, as well as space opera that populated readers' imagination from Flash Gordon to Star Wars. I hesitate to use the word "fun"--a word often ascribed to Martinez's writings--but the word fits. The issue I have with "fun" is that other words are not far behind: light, humorous, cheesy, forgettable. Those other words do not really apply here, but "fun" really does.

Emperor Mollusk vs. the Sinister Brain is Martinez's latest novel and the one I read. First off, let's look at the title. That set of words conjures a 1950-era B movie, doesn't it? If that is the type of story you imagined, you are not far off the mark. In this universe, all nine planets of our solar system--yes, Pluto is a planet, thank you very much--are inhabited, including a few of the moons. Mollusk is a Neptunan who, being the scientific genius he is, set about to conquer the entire system. This he has done at some undefined time in the past and, as such, is now the "retired" Warlord of Terra. (Love the Burroughs reference there.) Bored in his retirement, he is almost happy when a group of assassins try to kill him.

Together with his "protector,"the Venusian lizard-warrioress, Zala, Mollusk must travel this unique universe to uncover who is behind the attempt and who just might want the former Warlord dead. Granted, the list is long and multifaceted: the Saturans (he nearly destroyed their planet); the Venusians, the Lunar folk, etc. The Terrans are a much more docile group, having had a brainwashing agent injected in the drinking water.

What makes this book so dang fun is old school plotting--it's a travelogue type of story where Zala, the reader's stand-in, gets to see the solar system the way Mollusk does. Moreover, this is pulp SF in the grand, old style: ray guns, amazing aliens and creatures, and over-the-top action. The throwaway lines are another fun aspect of this book. Martinez will just dash off some line--like the Gorilla Hitler, and how Mollusk defeated him--and keep moving. More than once, I burst out laughing.

The novel is written in first person, with Mollusk the narrator. Now, you'd think that this would be a problem, but, in fact, it isn't. He holds back on Zala, who is duty-bound to protect him, and, thus, the reader as well. I kept thinking that this is how a Sherlock Holmes novel would be if Holmes himself was the narrator.

I listened to the audio version, and it is hilarious. Read by Scott Aiello in a bored British accent, Mollusk comes alive with his churlishnes, wit, and, at times, bravado. Aiello livens the rest of the characters in such a way that I wondered if listening to Martinez books might be the way to go. (Sidenote: I immediately jumped to The Automatic Detective, another Martinez book, and firmly believe audio is the way.)

Lest you think this only a tale of battles and narrow escapes, there's some depth to this story, too, as long as you allow yourself to see it. Over and over, while Mollusk and Zala chase leads and escape the bad guys, that have a running discussion about life, honor, duty, and individual [human] nature. The actions Mollusk takes he takes because that is in his nature. He cannot sidestep that which he is basically predestined to do. Same for his enemies, even when the logical course of action would be something different. It's a fascinating dialogue, but, if you don't want to dig too deep, just revel in the ray guns.

Summer's coming and all those beach books will be hitting the shelves. Do yourself a favor and pick this one up, too. It's well worth your time, and it might even help you if you encounter the Comet Monster, Gorilla Hitler, or a disembodied brain.