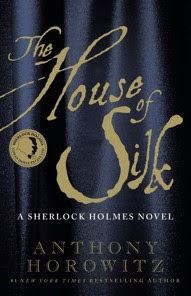 What a great review! I must admit I'm not familiar with any of the other Holmseian works other than Doyle's. But it's great to know that Horowitz has done such a fantastic job of staying true to the originals.

I might wait until I've read all the Holmes novels to read it, but I'll definitely read it.

Thanks for the review.

I've just finished this myself - couldn't agree more with you, a really great addition to the Holmes canon. As you point out, closing your eyes one could quite easily imagine Conan Doyle having written the words.

My review: The House of Silk by Anthony Horowitz

I too enjoyed this one and thought it felt authentic Holmes.

What a lovely review! It's very timely, not just because of the movie but because I happen to be reading Adventures of Sherlock Holmes at the moment, because Barnes & Noble offered it to me for free with my Nook.

You convinced me. I'm going to check this out.

The review says, "In the decades since Doyle died, this is the first officially commissioned and recognized by the late author’s estate." Wasn't Caleb Carr's THE ITALIAN SECRETARY authorized by the estate as well?

For my shame, I have not heard of this author, but seems very interesting! I will look for his books!

Great review of the book!

One of the best Sherlock Holmes pastiches hands down :)