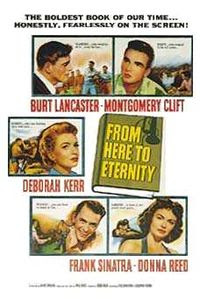 Like James Reasoner is doing at Rough Edges with his Movies I've Missed (Until Now) blog entries, there are a ton of classic films I've just never seen. When someone looks at me aghast when they learn I haven't see [Insert Classic Film Title Here], I usually reply with "Yeah, but I've seen Star Wars a hundred times."

"From Here to Eternity" is the latest classic film I just got around to seeing this past weekend. All I knew about it was The Scene: the one with Burt Lancaster and Deborah Kerr laying down on the beach, kissing, the waves crashing over them. Now I've got the scene in context and my only bit of wonderment was that it didn't last very long. Surprising considering how iconic the scene is.

The film (and the book before it) tells the story of bored soldiers stationed on Hawaii in the six months or so before the Japanese bomb Pearl Harbor on December 7, 1941. The main protagonist is Robert E. Lew Prewitt (Mongomery Clift), a soldier demoted to private and transferred to the island for, as Prewitt states, "personal reasons." We later learn those reasons and how they play in Prewitt's torment from his superior officers and his fellow soldiers. Frank Sinatra plays Private Maggio who befriends Pruwitt but has his own disciplinary issues (he can't stop drinking). Looking on is Burt Lancaster's Sergeant Warden, a hard-ass career man who runs the company while the ignorant and philandering Captain Holmes does his own thing.

Soldiers are not the only players in this human drama. Deborah Kerr plays the captain's wife and she and Sergeant Warden fall for each other. Donna Reed plays a lady (I think she's a prostitute although her actual role is a bit cagey in this 1953 film) for whom Pruwitt falls. Each lady wants something from their man but each lady wants their man to change. Of course, the Japanese change all of that and alter lives inextricably.

I thoroughly enjoyed the film. The actors all played their parts well, none more so than Donna Reed. In one of her best scenes, she tells Pruwitt why she won't marry him (note the word "won't" instead of "can't"). Her back is to him and her face is to the camera and she puts all the emotional turmoil of the character right on her face. Brilliant scene, especially when juxtaposed against the final scene and her final speech. Great stuff.

The depiction of army I found also quite interesting. I kept asking myself "Could I have done that, made a life out of being in the army?" Guess I'll never know. One other thing puzzled me and I'll have to go research the answer. I got to wondering something as the soldiers talked about being a thirty-year man (a man who made the army his life): in the day before the G. I. Bill, did joining the army constitute a job? With the G. I. Bill, soldiers would be paid to attend college or learn a trade with the intent of getting them out of the army and on to being productive citizens. Apparently, this was not the case pre-World War II. Anybody know any different?

And has anyone read From Here to Eternity and seen the movie? What are the differences, if any?
at August 17, 2009
Email ThisBlogThis!Share to TwitterShare to FacebookShare to Pinterest
Labels: History, Movies

I saw this movie years ago on TV. I can't for the life of me remember Montgomery Clift's character's reasons, but I recall the fellow was a horn player. Is that right? Can't recall much else save for The Big Scene and only because it gets referred to so often.

Wish I could say I've read the book—I've only seen the movie. Loved it, though.

I love this movie - Hollywood at its most showy.

Leah - Yes, Clift's character played the bugle and played it very good. There's a part in the film where he takes a bugle and, while the music is playing in a bar, blows the crap out of the horn, leaving all his fellows smiling yet aghast.

Chris - Yeah, I really liked it, too. Probably won't read the book--I hear it's something like 800pp.

Gary - Hollywood certainly is pretty showy in this one. Even Frank gets to sing a few bars. And dang if I didn't thoroughly enjoy Sinatra in this film, too. I've seen very few, if any, of his films.

I've not watched it yet, but I actually own a copy on DVD. It is on my "must watch" list along with a handful of other classic films that, much like you, I'm just now getting to.

I've only ever seen Montgomery Clift in one film, A Place In the Sun with Shelly Winters and Liz Taylor. Excellent film, loosely based on Theodore Dreiser's 1925 classic novel, An American Tragedy which was loosely based on an actual murder that occurred in the Adirondack Mountains in 1906.

I'm familiar with Debroah Kerr in An Affair to Remember with Cary Grant and The King & I with Yul Brynner. So I am looking forward to seeing her performance in From Here to Eternity... and after visiting Puerto Vallarta back in May 2008, I'd like to see Night of the Iguana which was filmed down there and Kerr also starred in.

We're linking to your article for Academy Monday at SeminalCinemaOutfit.com

Keep up the good work!