Finally! The Tarnished Star is here! 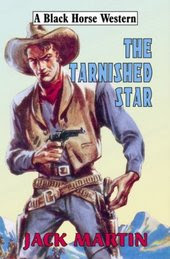 It took awhile but my copy of The Tarnished Star by Jack Martin (nee Gary Dobbs of the Tainted Archive blog) arrived in my mailbox today. I thought it was my next ARC from New Mystery Reader but no, it was The Tarnished Star. I'm finishing up Tobias Buckell's Crystal Rain for my SF Book Club (to be reviewed at SF Safari) but Martin's book will be read very soon.

All Sheriff Cole Masters wants is to raise a family with the woman he loves. However upholding the law in an era when gunfire speaks louder than words can be a risky business.Cole makes an arrest for the brutal murder of a saloon girl but the killer is the son of a wealthy rancher and it is clear the old man will do anything to see his son set free. Soon the peace of the small town is shattered with deadly force and Cole finds himself a lawman on the run for murder.The rancher wants Masters dead and the two deadly gunmen on his tail are sure they can do it. Soon blood will run as Cole Masters attempts to reclaim his tarnished star.
at August 08, 2009
Email ThisBlogThis!Share to TwitterShare to FacebookShare to Pinterest
Labels: Authors, Blogs, Reading, Westerns

Man I sure as hell hope you enjoy this. Thanks for your support.