Forgotten Books: It Ain't No Sin to Be Glad You're Alive by Eric Alterman 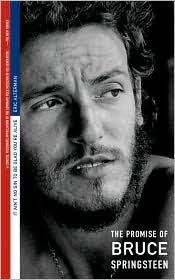 Now that we have the most important event of this month behind us (the successful transition to a new president), it’s time to turn our attention to the second most important event of the month: the new Bruce Springsteen album, “Working on a Dream,” landing on store shelves this Tuesday. And to get everyone ready, I’m reviewing Eric Alterman’s It Ain’t a Sin to be Glad You’re Alive: The Promise of Bruce Springsteen as part of Patti Abbott’s continuing Forgotten Books Friday project.

For those of y’all who don’t know, Alterman is an unabashedly liberal blogger/columnist/author of books on politics and music. He was the first major columnist hired to blog on a major media outlet (MSNBC.com) and he now writes for The Nation.

But that Alterman is not the one who wrote this book. He is, first and foremost, an enthusiastic fan of Springsteen’s music. Everyone reading this review is a fan of at least one famous person and we’d all like to meet said person. He got his wish in 1998 on the set of the Charlie Rose show. In a humorous introduction, Alterman relates how he met Springsteen before The Boss’s interview and how, when faced with one of his idols, he clammed up. He wanted to relate how much the music meant to him as he grew up. He wanted to pour out all the things he’d done to score tickets. He wanted to reveal that he couldn’t imagine his life without the soundtrack Springsteen provided.

What Alterman did say was nothing much more than “Hello.” And, with a clever wink, he ends his introduction with these words: “Here’s what I wanted to say...” What follows is a book-length love note to one of the most consequential musicians of the past thirty years.

For the most part, folks who read this book are already Springsteen fans. That’s pretty much a given. What’s essential about Alterman’s book is context. He reminds the reader just how dire the circumstances were for traditional rock n’ roll in a time of glam-rock, progressive rock, and other music crowding the AM and FM airwaves. By 1975, when Bruce landed on the covers of Newsweek and Time in the same week, one of the most famous quotes about Springsteen was made. The New York Times’ Henry Edwards wrote “If there hadn’t been a Bruce Springsteen, then critics would have made him up.” Alterman turns this quote on its ear. To him, Springsteen was too good to be true. “No responsible writer would dare invent him.”

The book is a musical biography of the Second Most Famous Musician from New Jersey (bonus points if you can name #1)*. Alterman’s takes on Springsteen’s music and career and mixed with a wealth of primary sources--via interviews, new and old, with the members of the E Street Band--and secondary sources throughout the years, infusing this book with a life all its own. It’s one thing for an author to write about the commanding stage presence of the young, shy New Jerseyian. It’s quite another when you discover quotes like this: “...jamming with Springsteen [was] ‘like having Einstein coming over and doing your homework for you.’” It was back in these days when the nickname “Boss” was first applied, something The Boss himself has come to detest.

Each chapter is a period of Springsteen’s career and it’s fun to read the table of contents to get a sense of how Alterman breaks up everything. “A Saint in the City” is the early years, the first two albums; “Tramps Like Us...” is, of course, the seminal “Born to Run” album; and “Caviar and Dirty” the 1990s, post-E Street Band phase. Each chapter starts with a photo and a lyric-of-the-era as an epigram.

The "Born to Run” chapters are certainly highlights of the book. From the exuberant joy of the music to the angry court battles that followed, the years 1975-1977 changed Bruce. According to Alterman, the fairy tale ended on 27 May 1977, the day Springsteen and his former manager, Mike Appel, settled their legal battle. Bruce had “entered [the studio in 1975] a romantic young innocent and left [the court battle] a guarded, distrustful adult.”

In light of his recent efforts for Democratic candidates in 2004 and 2008, one can’t help but wonder if this was the turning point in Bruce’s political as well as social life. I’d say it was, as evidenced by the transformation of his song lyrics. Up through “Born to Run,” Bruce sang about youth, dreams, girls, cars, and rock n’ roll. After, starting with 1978’s “Darkness on the Edge of Town,” outcasts of a different sort emerged in his songs: killers, war veterans, unemployed workers, or victims of terrorists attacks or police shootings. Repression becomes a theme, chains that hold people in virtual or real slavery. Alterman writes the bleak assessment of “Darkness” that cast a long shadow over the next thirty years: “The songs on Darkness are about the characters Born to Run left behind.”

I could go on and on about the fun facts in this book (“Darlington County” as a "Darkness" outtake? “Born in the USA” as a cut from "Nebraska"?) and I could go on and on about Springsteen (mainly how the repression he wrote about thirty years ago has allowed faith and redemption to spring forth as the major theme of his later work). I am a late bloomer to the music of the Boss. For me, the 1992 albums, "Human Touch" and "Lucky Town," were my first records after having listened to "Tunnel of Love" and finally realized what Bruce was singing about. Ironically, the reprinted edition was published in the same year as the September 11th terrorist attacks, an event that would spurn the reformation of the E Street Band and Bruce’s own response in the album "The Rising." I’d like to see Alterman write a follow-up so that he can capture Bruce in this decade.

But, in the meantime, for all fans of Springsteen and his music, this book is essential reading. Pick it up next Tuesday when you pick up the new CD. Get a nice musical history lesson of the past forty years through the prism on one artist. But, more than anything, read this love letter by one writer about an artist many of us cherish. I’ll just let Alterman’s last paragraph serve as benediction.

The “greatest challenge of adulthood,” Springsteen once explained, “is holding on to your idealism after you lose your innocence.” For anyone who has traveled from adolescence to maturity during the past quarter century, there is no better argument for holding on to one’s idealism--and no better companion for the journey--than the man who spoke those words and, through the power of his music, somehow willed them to life.

My favorite album in the old days was always Nebraska. So stark and unrelenting and important at the time. I use to be a huge Springsteen fan but somewhere along the way Jazz took over.

Growing up, I've always felt like Springsteen was someone I should like but, for whatever reason, I just never connected with his music. I'll have to go back and take another listen.

I think one of Bruce's best traits is the ability to take somber lyrics and put a coat of happy-sounding music on it and make people smile. I'm thinking Badlands, Dancing in the Dark, Lonesome Day, Hungry Heart. The acoustic Born in the USA brings the song back to its stark, depressing roots.

I still buy his music most of the time. He's great to clean or paint to.

Jacob, Back in 1984, I *loathed* Springsteen. Absolutely hated all his songs. Then, a friend loaned me "Tunnel of Love" and I found that I liked it. Cue a re-listening of BitUSA album and I got it. Stephen King's books of the time also helped as he quoted Springsteen quite a bit. I also realized that King and Springsteen both were writing about the same topics. It all just mixed together to the point now where Bruce is second only to Chicago in my book (and, on some days, even surpasses my old favorite band).

Darkness on the Edge of Town is my favorite of what I've heard.

I actually like the new song, too ("Working on a Dream"). My wife and I have seen it a few times on VH1 during late night baby-feedings. Have you seen it?

I've seen this book at Borders several times, and always been interested. Thanks for the informative review.

I listened to Bruce almost 24/7 and I think I bossed myself right out. I remember friends begging me, "No more Bruuucce!"

Whenever I need a change of music for my writing, I listen to Springsteen. His music helps with the creative flow.

He's one of the artists who's marked my ageing. At 18 i was all about BORN TO RUN, the compact operatic thrill, THUNDER ROAD is still an amazing song.
As i hit my early twenties it was NEBRASKA, which seemed to mirror my love for noir and dark writing. Then I got married/divorced and TUNNEL OF LOVE hit home quite hard. These days i'll usually point to DARKNESS.... as the one i respond to most, i love it.

Paul Westerberg and Tom Waits overtook him somehwere along the way in my head, but i still love pretty much everything he does.