Adventure Week #4: Tarzan of the Apes by Edgar Rice Burroughs 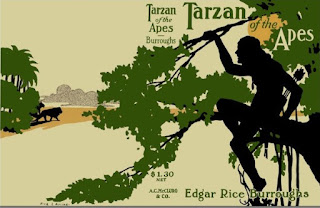 (This is my latest entry for Patti Abbott's Friday's Forgotten Books. For today's complete list, head on over to her blog.)

Can we be honest here? Tarzan is far from forgotten. He's so well know, in fact, that we all know the story of Tarzan, Lord of the Apes. Whether it’s from all the movies, the TV series, the comics, the animated movies of Disney, or the Broadway play (yeah, really, and it doesn't look half bad), Tarzan has entered the collective DNA of popular culture. But how did it all begin? I wanted to know and that’s why I picked up Edgar Rice Burroughs’ first Tarzan novel.

Again, y’all know the story so I don’t have to restate it here. In short, John Clayton, Lord Greystoke, and his wife, Lady Alice, get themselves marooned in equatorial Africa. Soon after the birth of their only son, John, they are killed and the child is adopted by the she-ape Kala, whose own child was also killed. Named Tarzan (“white skin”), little John is raised unaware of his human heritage.

As an adolescent, he teaches himself how to read with books found in the cabin his parents built. Eventually, he sees other humans--native Africans--but he still hasn’t seen a person that looks like him: a white man. A group of white men and women soon get themselves marooned *in the exact same place* as his parents. In this group is a young woman named Jane Porter. Tarzan is smitten and the story really takes off from there.

Not that it was ever boring. Tarzan fights rival bull apes, native Africans, lions, and all sorts of jungle denizens. I was happy to note that Tarzan doesn't always escape his trials unscathed. After a particularly bloody battle, he wears a scar across his forehear that burns with anger whenever the ape man rages. Burroughs basically created a super man, a noble savage who knows right from wrong, cannot be corrupted, and can will himself to do the right thing. The dialogue is a bit stiff and some of the coincidences make you go “Oh, come on!” but they’re not egregious. What surprised me most was the ending. It was a cliffhanger. Pretty bold for a first book.

The stereotypes are present and as you’d expect: Africans are savages, women are frail, and other white men are all out for money and power. Only Tarzan rises above it all. Comparing the stereotypes of King Solomon’s Mines (1875) and Tarzan (1912), not a lot of progress was made in the nearly forty years between the publication of both books.

If you know the Tarzan stories through the movies or radio, then you know the signature thing: his call, yell, what have you. Johnny Weissmuller’s version is the most famous. You can find it here. In the book, Burroughs describes it as a fierce call that chills the blood of those who hear it. What’s better is the way Tarzan looks when he issues the call: after he’s beaten an enemy, he stands with one foot on his kill, and belts out the yell. That’s what I’m talking about.

The setting is the Africa of romance, the Africa of your imagination. It's fantastic. The violence in the novel is much higher than the older movies could ever show. Oh, and there’s another thing the movies could never show: Tarzan’s nakedness. Up until he meets the whites, he’s naked. But he doesn’t care since that’s how the other apes are--except they have hair--as well as the Africans.

I thoroughly loved this book--though not quite as much as Treasure Island--and can think of no other way to demonstrate my enjoyment than to say this: I’ve already read the sequel. For that, you’ll have to come back next week.
at September 11, 2009
Email ThisBlogThis!Share to TwitterShare to FacebookShare to Pinterest
Labels: Adventure Week, Authors, Friday's Forgotten Books, Pulp Fiction, Reading

I wonder how many boys still devour these books-or any books.

Wow, another one to add to my must read list. The only film version I've ever seen of this is the 80s film, Greystoke: The Legend of Tarzan with Christopher Lambert in the titular role. I believe Jane was played by Andie MacDowell but my memory is a bit fuzzy.

Thanks for this intro to Tarzan - I'm actually not as familiar with the books/movies as I should be. Don't think I've ever seen one.

A lot of the early Tarzan books were outstanding, although I liked best the ones where he finds lost cities. I'm a bigger fan of John Carter though.

I love Burroughs, but mostly because I love his back story. Anyone that begins writing simply because they're tired of reading crap and think they can do better (and do!)is amazing. I did a large study on him in undergrad--read Minidoka. Highly entertaining. Published some 8 years before he hit it big.

Patti - My son will at least be introduced to Treasure Island, Burroughs, The Hardy Boys, the Three Investigators, and the like. It'll be up to him to chose to read it or wait until he's forty like his dad.

Perplexio - I've just put Greystoke on hold from the library. I remember liking it back when it was released. Think you're right about Jane.

Cullen - I'm actually wanting to watch some of the movies now. And read more of the novels. My mom bought about a dozen of them and I have them here at my house.

Charles - I recently re-read John Carter #1 and will get to Books 2 and 3 later this year. Interestingly, both Carter (on Mars) and Tarzan are basically super men. Wonder if Carson on Venus is that way. Speaking of lost cities, Tarzan finds Opal in book #2.

Stewbie2 - Do you still have the paper you wrote on ERB? I'd love to read it. I was reading about how Tarzan came to be published and, as a not-yet-published writer, was happy to see that Book #2 was rejected by the publisher of the first book. So ERB went out and sold #2 to a different publisher. Nice.

I read all the Tarzan's when i was a teen, along with the John Carter series, Venus series, Pelucidar, Inner Earth ... geez, the list is endless. Burroughs was quite prolific. And the cover art! --- wonderful stuff.

I heard the other day that a movie deal is close to being inked to bring John Carter of Mars to the screen. In anticipation, i picked up a new copy of the book to read. I have my original ones in boxes somewhere!

The first two Tarzan books are amazing, a jungle adventure fantasy unlike anything I've ever read. You get it all; Man versus Nature, Man versus Man, and (most interesting) Man versus Self. Tarzan does rise above, but he is so un politically correct that he is amused by all the namby-pamby faux morality of lesser people who cannot hunt for themselves and drink the warm blood of one's own kill. And yet he is able to be merciful and wise, the educated savage. The prose was incredible. Burroughs made it all look far too easy. It's not.

An interesting fact about Edgar Rice Burroughs is that he had never set foot in Africa before or during the writing of his books. He imagined what it would look like.

I remember looking at this book before I could read as there were illustrations in it with the onion skin papers on top. The pictures alone fascinated me and I would get one of my older brothers to read it to me. When the time came where I was able to read it on my own, I did so many times.

It's a classic worth rereading.

I loved it very much when I was a kid and it would be a good idea to reread it now I'm a middle aged peter pan.

Scott go to BArnes nad Nobles since they have two nice collections they put out of the John Carter books. THe first having books 1 - 3 and the second I think its books 4 and 5 with a cool retro rocket cover.

Or you could just read the Marvel comic book.

I loved Tarzan but as the series moves on it seems every other book there is another lost city. The first few books in the series though are must reads.

I just read this review after reading your Tarzan 2 post. Enjoyed it just as much. Your blogging totally inspired me today!

Frank - The cover art for Tarzan I know best are the ones from the black covers, late 70s I think. And as for the John Carter movie, if they time it right, they can release the film in 2012, the century anniversary of John Carter.

Phy - Since I've now read The Return of Tarzan, I can agree with you. Taken together, they constitute a great pulp work of adventure fiction. Yes, ERB does make it look easy. This may be pulp fiction but it's well-written pulp fiction.

Barbara - That is an interesting fact. I guess he just used the Africa of his imagination, like Charles Ardai told his fellow writers of the Gabriel Hunt stories to do.

Paul - Count me in the numbers of middle aged Peter Pans. There's a reason these books are so much fun: they make you feel young.

Bruce - I have a few issues of the John Carter/Marvel comics. I'll have to drag them out. And I need to get to Book #2 later this year.

Chris - Glad I could inspire you. Your review of Hattan's Castle was fun and inventive.