Forgotten books: The Night of the Assassin (The Wild Wild West #3) by Robert Vaughn 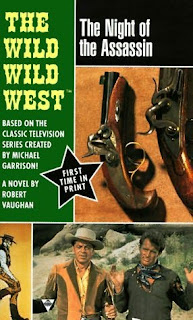 At its best, television can link people during a happy event (the inauguration), a tragic event (9/11), or great entertainment (“The Wire” or “Foyle’s War”). At its worse, it appeals to our lowest common denominator (insert the most insipid reality show here). Somewhere in between are our guilty pleasures, those shows while, not great, still give us smiles and escape for an hour each week.

One of those guilty pleasures is “The Wild Wild West,” the 1960s “James Bond on horseback” show that was wonderfully anachronistic and charmingly fun. Robert Conrad’s tight pants and short waistcoat were hardly the stuff of the old west but he looked good so who really cared? Ross Martin’s Artemus Gordon, the consummate actor, was Jim West’s brilliant partner. Except for the episodes without Martin’s Artemus, there’s hardly a clunker in the bunch.

They saved the clunkers for the books. Well, at least one of them.

Eleven years ago, Robert Vaughn wrote three novels based on the series. In a break from my usual pattern (read book #1 first), I decided to read book #3, The Night of the Assassin. Why? Because, according to the back cover, the story takes place here in Texas--in Houston, no less--and it deals with the desire for some Texas secessionist to kill President James Garfield and leave the union. Again. You know, there was a war that settled that little matter. There’s not a need or a justification for Texas to secede. And there’s little reason to read this book.

I wanted to like it, I really did. I was all primed to see what adventures Jim and Artemus had in my hometown. I even checked my brain at the door as I read some of the clunky prose. (It probably didn’t help that I am listening to the gorgeous prose of Dan Simmons’ Hyperion while I read this book.) I checked up on Robert Vaughn and discovered he’s written something like 200 books. This one he mailed in.

The book opens on April 14, 1865. For you non-history types, that’s the day John Wilkes Booth shot Abraham Lincoln. Of course, that’s the day Jim West gets his discharge papers, meets Artemus, and, later, attend the theater at the same time as Lincoln. I get that. But their witty repartee starts that very same day...and they’ve just met. Didn’t jive. Needless to say, Jim and Artemus don’t get their man.

Cut to sixteen years later, 1881. Jim and Artemus are dispatched to Sweetwater, Texas, to investigate some counterfeit money circulating around town. Now, at this point, I’m thinking to myself “Well, Sweetwater’s nearly 500 miles from Houston, a seven hour car ride in 2009. How are the dynamic duo going to get down to the Gulf Coast? Oh, well, the book’s still young.”

They arrive in Sweetwater and investigate. The Texas Liberation Front (TLF), the funny money, and a traveling acting troupe all seem to be in the same places at the same times. You don’t need to be Sherlock Holmes to figure out there’s a connection. Artemus infiltrates the acting troupe while Jim heads out to find the TLF. (Stifles yawn here.)

The typical stuff happens: gun fights (not convincing), night investigations (not suspenseful), flamenco guitar (played by Jim, natch, because he’s Jim West!), and the deployment of gadgets. Now, that’s where the book goes right. The gadgets are cool and have always been. There’s even a primitive computer.

As we pass the halfway point, I started wondering, again, how the heck Jim and Artemus are going to get down to Houston. And where’s that main plot, the one about Garfield, the back cover promised? Shut up, Scott. Don’t think. Just be in the moment. Sighs. Turns page.

Garfield doesn’t step onto the book’s stage until page 134. The entire book is only 181 pages. Now, the historian in me started thinking about what really happened to Garfield. He was shot on July 2, 1881, and died two months later. You’re typical reader isn’t going to know that so I went with the flow. I was curious to see how the real events melded with this fictional story. And I’ll admit it was pretty good. As Jim and Artemus confound the assassins (come on, that’s not a spoiler, you knew it when you picked up the book), the real Garfield is getting shot up in Washington. The scenes cut back and forth at this time and, honestly, it worked well. Jim and Artemus foiled the plot only to have their president get wounded anyway. Would have been nice to have the two men actually be sad about it. All we get is this: “Artemus sighed.” Sighed? Is that all?

Oh, and the city in which the attempted assassination took place? Dallas. Not Houston. Guess that explains how Jim and Artemus are to get to Houston. They aren’t! I’m a tech writer by day and I’d be in serious trouble if I let a book get out with erroneous information on the cover. The actual date of Garfield’s shooting was July 2, 1881. The date in the book: July 1, 1881. Minor quibble but where’s the editor?

The absolute groaner of a quote was made by the Dallas police chief at the end: “And while I am saddened [is that all you can muster?] that President Garfield was shot, I must confess to being thankful that it didn’t happen in Dallas. I’m not sure the city could ever live anything like that down.” The beauty of historical fiction is that you can use quotes like this because we know what happened. But seriously, that’s overkill.

There are two other books in this series and I already own them. I imagine I’ll get around to them. Someday. In the meantime, however, I’m off to my library. I need to check out some of the original episodes on DVD so I can be reminded of how fun the shows were. Lots more fun than this book.
at January 30, 2009
Email ThisBlogThis!Share to TwitterShare to FacebookShare to Pinterest
Labels: Friday's Forgotten Books

I wonder if the disappointment comes from high expectations? For me it's more common with movies than books. The trailer looks great, there's an all-star cast, everything looks like it should be great and then BOOM!, you're watching Paul Blart:Mall Cop. It just could never live up to your expectations.

As usual, thanks for the great review!

I've just finished season 1 of the show. I really enjoyed it but my wife (who is the voice of reason) couldn't believe how childish it was. She's probably right but looking through my twelve-year-old permanent lenses, I loved it. Getting ready to start season two tonight -- alone.

Didn't realize they did novelizations of that one.

I read the three books in this series when they first came out. Don't remember the first thing about them. Possibly a testament to their quality.
Did you know they did a novel back during the original run of the series. By Richard Wormser, it was based on the episode The Night of The Double-Edged Knife and simply titled with the show's name. It must have been written early in the show's run as the characters' relationships weren't the well established ones of which we were familiar.

Jacob - I didn't expect a lot but I expected it to be better than it was.

David - My wife has a similar take on WWW. Dunno. Maybe it's a guy thing?

Patti - I think they just did these three.

Randy - Thanks for the tip. I like the show enough to ferret out this title. And I will probably read the other ones I have. Just not right away.