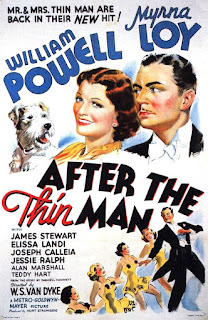 It took the movie studios two years to make the sequel to The Thin Man, but I only had to wait a day.

Released on Christmas Day 1936, After the Thin Man picks up right where the first film ended: with Nick and Nora Charles on the train home to San Francisco. I always get a kick out of reporters, newsboys, and random folks on the street who say hey to Nick like he's a celebrity. Can you imagine any of the other fictional detectives being like that?

The filmmakers knew what make The Thin Man special--the relationship between Nick and Nora with Asta thrown in--so they made the sequel film nearly two hours, quite a bit longer than the first film's run time of 91 minutes. It gave William Powell and Myrna Loy ample extra scenes that don't really forward the plot, but serve as little cocktails of joy with their onscreen chemistry. They just kind of flit through the story (and life?) taking everything as it comes. Like when they arrive at their house on New Year's Eve and discover a giant "surprise" party with the house full of people. I love how they're so calm with what they find. They just start dancing and make their way into the kitchen where Nora takes a call from her cousin, Selma, and the real plot starts.

It seems Selma's husband, Robert, has gone missing. The "old battle ax" Aunt Katherine asks Nick to look into it so that the family name is kept out of the papers. Jimmy Stewart plays David, Selma's former suitor, and he arrives and then is sent away. He tells Nick that Robert called him with a proposition: pay Robert $25,000 and he'd (Robert) would leave Selma to David.

In one of the funnier casting choices, Aunt Katherine's butler is a barely walking old geezer named Henry. When Nick deposits his overcoat in Henry's arms, the butler nearly falls over. Throw in a "walk this way" moment where Nick mimics Henry's odd gait, and you've got more physical gags in the first twenty minutes of this film than all of the first.

Nick and Nora head out to the LiChi Club where much of the main plot is revealed. Robert's there and he's got eyes for the star performer, Polly. She's in cahoots with the club owner, Dancer, and their goal is to steal the $25,000. Meanwhile, Polly's brother, Phil, knows about the scheme and wants in on it.

David pays off Robert but Phil sees it. David jets home to pick up some clothes. Selma's there and, after he leaves, grabs a gun and chases after him. Polly's also there, in the fog. Dancer's driving to the house. A shot rings out and Robert falls dead. Selma arrives, gun in hand, staring down at her dead husband. David arrives, tells her to go home and act like she knows nothing. He later see David toss the gun into a river.

What I find fascinating is that the murder occurs fifty minutes into the movie. In a modern movie, the killing would happen in Act I or maybe even the prologue and we'd get the relationship stuff via the investigation. In a film like this, we get all the backstory first, enabling us to get to know the characters before the shooting. I probably wouldn't want every story done this way, but it's a nice change of pace.

Another thing I noticed is during the scene in Dancer's office. Nick's there, some cops, Polly, Dancer, and Dancer's lawyer. Nick is "just talking" but he's planting seeds and asking questions of the bad guys. It's almost like he's a pseudo Greek chorus, observing the events versus participating in them. Additionally, when Dancer cuts the lights and a fight ensues, Nick doesn't even bother joining in. He just gets under the desk while everyone else scurries around. In this way, he's almost like Bret Maverick from the TV show.

After a rock with a note tied to it is hurled through the Charles's window in the wee small hours of the morning, there's yet another sequence with Asta as the main star. Considering he is actually part of the billed cast, I'm guessing his agent worked out the details.

With my modern sensibilities, I'll admit it's rather irritating when Nick locks Nora in a closet so that she can't come with him to visit Phil in a seedy hotel. I know it's of the era, but it's still pretty lousy.

But Nick's visit to the hotel reveals a secret, and it leads him to realize he has most of the pieces in place. But he needs to fill in those last blanks. To do that, he gets the police detective to round up all the characters and, in a repeat from the first film (probably all of them), he gives a monologue where he uncovers the culprit. While this scene isn't quite as entertaining as the dinner party version in The Thin Man, it's great to see Nick finally spots the one clue that reveals the killer.

As a writer, I appreciate the murder/mystery aspect of After the Thin Man better than the first. It's definitely one in which all the clues are present to the audience, allowing them to piece it together before or at the same time as Nick. But I so love the dialogue between Nick and Nora. I liked the longer movie and love seeing these two actors do their thing.

So, I have seen the first two Thin Man movies before. Starting tomorrow with Another Thin Man, I'm heading into uncharted territory.

Nora: Oh you wouldn't know them. They're respectable.

Nick [to the police detective after Nick and Nora slept through the day]: Want some breakfast?

Cop: No, I just had dinner.

Nick: Come on, let's get something to eat. I'm thirsty.

Nora: Aunt Katherine wants to speak to you.

Nick: What have I done now?

Nora: Do you know why Robert wasn't here tonight?

Nick: Sure, because he's smart

Nick: That's swell. Now if we could just get Aunt Katherine to disappear...

at December 27, 2020
Email ThisBlogThis!Share to TwitterShare to FacebookShare to Pinterest
Labels: Nick and Nora, The Thin Man, Traditional mysteries