Shadow of the Thin Man Softens Up Nick and Nora 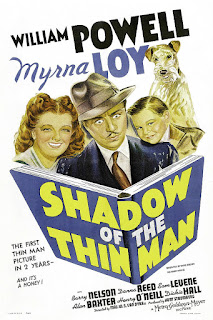 Released the day after Thanksgiving 1941, Shadow of the Thin Man is the fourth film in the six-film series. The film opens on domestic bliss. Nick, young Nick Jr., and Asta are walking in the park. The fairy tale he tells his boy is the racing betting odds. After Nora starts shaking a cocktail, Nick hurries home, showing more drinking in the first ten minutes of this movie than in all of Another Thin Man. Cut to a dining room scene a little bit later in the movie and Nicky convinces his dad to drink a glass of milk versus the cocktail in his hand. "You wanted to be a father," Nora says before Nick downs the milk. In what must have been an unscripted scene, Myrna Loy all but cracks up as William Powell attempts to down the drink. We even get a bit of true laughter.

A trip to track reintroduces us to Lt. Abrams, last seen in the second Thin Man film, After the Thin Man. It seems a jockey has been killed after throwing a race the previous day. Soon, Nick talks with Paul Clarke (future first James Bond actor Barry Nelson) and Major Sculley about a gambling syndicate in the area. The dead jockey was their first real witness and he was bumped off to keep from talking.

Nick and Nora show up at a wrestling match and we get a little sub-plot with a reporter, Whitey, trying to extort the moll. Later on, we see Whitey meeting with Link Stephens, who appears to be the leader of the syndicate. Donna Reed plays Link's secretary who's also in league (and engaged) with Clarke who takes her keys back to Link's office. Sure enough, he finds the evidence but Whitey catches him red handed. A fight ensues, Clarke gets knocked over the head while Whitey gets shot dead. The law thinks Clarke's their man, but no so Nick.

Nick heads back to the racetrack showers and finds the gun. He and the lieutenant know that the same gun killed both the jocket and Whitey but they tell the reporters a different story. Meanwhile, Nora uses her whiles to get some info from Maguire and passes it off to Nick while he's on a merry-go-round.

Various clues and scenes lead us to the inevitable final gathering of all the suspects, cops, Nick, Nora, and Asta. As usual, Nick has a bunch of pieces to the puzzle, but doesn't quite know how they add up. That is, until he makes this observation: "If you let somebody talk long enough, they'll spill they beans. And they have." At which point the camera cuts to each of the suspects. Until the culprit pulls Nick's gun and threatens to shoot our detective.

At which point Nora does something completely unexpected: she jumps in front of the culprit to protect Nick. Yes, really. I've been noticing Nora's gradual involvement in these cases increase, but this was rather unexpected. Nice to see.

What is also pretty fun to see is Nora's hats. She wears a few in this picture, most of which hang half off her head. She walks as if she's balancing her posture to make sure the hats don't topple.

If the third Thin Man film showed a more mature Nick and Nora, this one tries to up the ante a little. There's a funny bit at a wrestling match where Nora, anxious in watching the bout, puts Nick in a head clamp. Powell and Loy seem to be having fun as always, but it's really a treat to watch Loy when Nora isn't speaking.

The mystery is a twisty-turny one and you'd need a scorecard to follow all the clues. But when Nick outs the real killer, the final clue is pretty darn obvious.

It is fascinating to see the transformation of these central characters over four films so far and from 1934 to late 1941. The edginess of the first two has smoothed out into the palatable yet still enjoyable latter two. I think the broad appeal of the Thin Man movies to a general audience (likely including kids) is responsible for the breezy nature of this film. The sex appeal between the two leads is also softened. Where in the first two, there was definite marital/sexual chemistry, by 1941, it, too, is smoothed over. Here's a short quote that'll give you an idea of what I mean.

Nick: I tell you what, you go home, cold cream that lovely face, slip into an exciting negligee...

Nick: And I'll see you at breakfast.

Nick drinks more on screen but Nora doesn't, even though it's hinted at. Powell's hair is likely dyed at this point because it is very dark. It was also fun to see Nick Jr. old enough to recite lines back and forth with Powell and Loy. He fits right in with the Charles family.

This is the last Thin Man film before the Pearl Harbor attack only a few weeks after Shadow of the Thin Man drops in theaters. I am very curious to see what the war experience does to this franchise.

Nora [to her maid]: He's [Nicky] becoming more like his father every day.

Stella: He sure is. Yesterday I saw him with a corkscrew.

Lt. Abrams: That jockey that threw the race yesterday was shot.

Nora: My, they are stict on this track.

Stevens: You're going to see some great wrestling tonight.

Nick: How do you know? Were you at the rehearsal.

at December 29, 2020
Email ThisBlogThis!Share to TwitterShare to FacebookShare to Pinterest
Labels: Nick and Nora, The Thin Man, Traditional mysteries