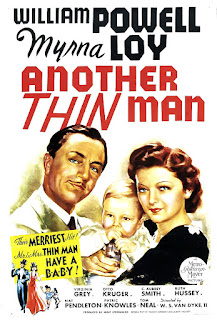 Unlike the second film, the mystery in Another Thin Man (1939) is set in motion within the first five minutes. As soon as Nick and Nora arrive in New York City, Colonel MacFay, the old gent who minds Nora's inheritance (and was partners with Nora's father), calls them and insists they come on out to his estate on Long Island. On the drive up with the new nanny they picked up in New York, Nick sees a body, but when the limo stops, the body's gone.

When our heroes finally get to the estate, they find the old colonel in a fit. He thinks Phil Church--a former business partner who went to jail for ten years after a business deal went awry--is out to kill him. He's got a bunch of guards welding shotguns. His daughter, Lois, and her fiancee, Dudley, are there, along with the chauffeur, MacFay's secretary, Freddie, and his housekeeper, Isabella. We viewers are about to get the lowdown over dinner when Nora finally gets a little victory: she pickpockets the colonel's keys and slips them to Nick. "I haven't been married to you for nothing." After two movies with next to no sleuthing, it's great to see Nora involved in the action.

After Lois's dog is killed and the swimming pool house is burned, we learn from Dudley that the beef Phil has with the colonel is simple: their business deal meant Phil did a few illegal things that would reap Colonel MacFay all the profits without knowing too many of the details, but if things went south, Phil would be left holding the bag.

Nick walks over to Phil Church's house--under surveillance by the cops--and stays long enough to get threatened by him and his gal, Smitty, and his Asian servant, Dum-Dum. When the trio gets to New York, we learn Smitty's married to a guy in jail but Phil's wanting to take things to the next step.

Cut back to the MacFay mansion and little Nicky wakes his parents and Lois joins them. No sooner are they talking than the power goes out and a gunshot is heard in the dark. The colonel is dead. His room is all destroyed. The nanny escapes amid all the commotion. The Assistant DA and the local cops show up and actually start to suspect Nick. In a bit of meta-commentary, a pair of cops question Nora, talking about all the times Nick shows up, there's a pretty girl and a murder ensues. They specifically reference the earlier Thin Man movies. Dudley is shot dead and everyone suspects Phil Church is the villain.

Nick, Nora, and everyone else all escape back to The Big Apple where the housekeeper lets slip that she's Lois's mother! Pretty darn convenient now that Lois is set to inherit $5 million. Clues lead Nick--who has ditched Nora yet again--to the West Indies Club where viewers in 1939 are treated to a music-and-dance number befitting the Cuban rage at the time. Turns out, Nora is already there. She's to hold $14.75 in her handkerchief and the guy who knows where Dum-Dum is will meet her. Again, Nora finally has something to do and it's nice.

We also get the return of police lieutenant Guild from The Thin Man.

In a funny little scene, a bunch of former criminals all show up, babies in their arms, for a "boithday" party for little Nicky. One of the goons is none other than Shemp Howard in a pre-Three Stooges role.

Not to give away the ending, suffice it to say we have a scene with all the characters in the same room and Nick walking them and the audience through all the clues. This solution was quite special given the steps involved with the initial killing of Colonel MacFay. It makes sense considering original author Dashiell Hammett wrote the story.

The Core of the Series

But the heart of these movies is the relationship between Nick and Nora. While this movie doesn't have as many scenes with them filled with the witty banter, there's a genuine warmth between William Powell and Myrna Loy. I can't remember if, in the first Thin Man movie, they mentioned how long Nick and Nora had been married, but now that they are parents, there's a mellowing out. But the love between is still fresh and full. Nick and Nora each have scenes where only via their facials expressions, you can tell they love each other. It's really nice to see that. Heck you can see that in the movie poster.

Of course, those kinds of scenes are not without humor. When Nick meets up with Nora, she asks him how he knew she was there. "I saw a great group of men standing around a table," he begins as Loy smiles. "I knew there was only one woman in the world who could attract men like that - a woman with a lot of money." And Loy's smile drops.

Nick drinks way less in this one and Nora doesn't sip anything at all. That's probably a result of movie standards maturing in the five years since the first film and the studios not wanting to highlight all the drinking. There's less physical comedy here, too. The end result makes this a fun picture, heavy on the mystery and sleuthing.

I'm liking this series quite a bit despite my modern sensibilities being jarred. It's fascinating to see a husband-and-wife sleuthing team, especially in this era. You can see how everything from Hart to Hart to Castle took inspiration from Nick and Nora.

Nora: It wasn't his fault, [Mr. Charles] smells like a dog.

Nick [upon seeing Nora at the West Indies Club]: How long have you been leading a double life?

Nora: Just since I've been married.

Nora: I got rid of all those reporters.

Nick: What did you tell them?

Nora: I told them we were out of scotch.

Nick: What a gruesome thought!

at December 28, 2020
Email ThisBlogThis!Share to TwitterShare to FacebookShare to Pinterest
Labels: Nick and Nora, The Thin Man, Traditional mysteries