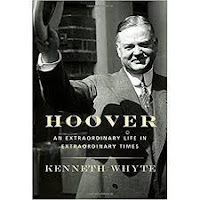 Even to a historian, Herbert Hoover was a mystery.

Before reading Kenneth Whyte’s new biography of our 31st president, Hoover: An Extraordinary Life in Extraordinary Times, I knew three general things about Hoover. After World War I, he was instrumental in helping Europe feed itself and get back on its collective feet. As Secretary of Commerce from 1921 to 1929, he helped steer the American economy to high levels before the Stock Market Crash of 1929. And, as president, he was unable to stem the tide of Depression. On that last point, I had the general impression Hoover did little other than to say the Depression was just the way of business. It was only when Franklin Roosevelt came into office that the American government possessed a man willing to try anything to help.

But as I listened to the book and read about his energetic performance in just about everything he put himself into, a question began to form: what went wrong during his presidential administration? That is, didn’t Herbert Hoover try to help people?
When one reads a biography of a famous figure, generally you find things you like and can admire. Funny thing with Hoover: he was a peculiar man and, at least until his later life, an almost shy person who didn’t always enjoy the company of some people. In fact, during the early years of this biography, I got to thinking Hoover wouldn’t always be a guy with whom you’d want to just hang out. He was just peculiar. Even his marriage seemed rather perfunctory. The more the biography went on, the more it seemed, as the author noted, Hoover was a mere spectator of his own family.

Yet his engineering mind was fantastic. He worked all over the world which gave him a global perspective on things. In one of the more remarkable events I admired, it took Hoover, then living in London, barely a day to start setting up a group to help stranded American caught unawares at the outbreak of World War I. Many folks were stranded with no means to obtain money to buy a ticket back to America. Hoover started up a committee and did the thing he almost always insisted on: make him the one decision maker and leader. In this capacity, he was able to direct resources where needed and helped get over 100,000 Americans back home.

He repeated the feat during the war as he headed another committee to aid in relief of hungry Belgians. What I found fascinating was Hoover’s group, The American Relief Administration, was the only group recognized by both sides of the war. Each side allowed Hoover’s ships—flying its own flag—through enemy lines.

He was a data-driven man in an era just beginning to understand what data was and how it could be used. As Secretary of Commerce (and “under-secretary of everything else” as his detractors said), Hoover took an activist role in government. President Harding encouraged this and, when Coolidge assumed the office, kept Hoover on. He was in prime position to bring his expertise to American when the Mississippi River flooded in 1927. There Hoover was, on the ground, doing what he was most able to do: harness the goodwill of people and direct it to those in need.

He was a logical choice as the Republican nominee in 1928, and he won easily. His help to the poor in 1927 brought a large majority of Americans to his side in addition to the typical GOP voter. In an era of the Roaring Twenties, everyone seemed to like Hoover. Yet the man himself saw the warning signs looming on the horizon. He tried to thwart a potential downturn as Commerce Secretary, but others didn’t share his views. When the crash arrived, Herbert Hoover did what he had always done: gather a team with mounds of data and attack the problem.

It was here where I had my eyes opened. Rather than be the man who seemed to sit idly by waiting for the market to correct itself, Hoover actively pursued solutions. Sure, his personality wasn’t suited to leading the country in its most dire time before World War II, but he wasn’t a bystander. True, he preferred the government not to actively intervene if at all possible. He extolled the virtues of volunteerism, by individuals as well as businesses, seeing it as the best way for Americans to get back on their feet. But when businesses didn’t respond, he led the way. Not all his policies worked—the notorious Smoot-Hawley Tariff being the most famous example—but it is easy to see how Hoover paved the way for the direct government intervention of the Roosevelt years.

It is a rare figure where both sides of the political spectrum can claim a man as their own. The Progressives saw in Hoover a man willing to try things and have, as his ultimate aim, the betterment of his fellow Americans (and humans, as per his work prior to his government service). At the same time, the modern conservative movement can also claim Hoover as their own. After his defeat in 1932, he became a critic of what he saw as the overreach of FDR, and laid down a philosophy picked up by other conservatives in the 1950s and 1960s.

Herbert Hoover was a complicated man, yet there was more to him than meets the eye (or is contained in a Wikipedia article). He was certainly far from perfect and Americans needed a leader more personable than him during the Depression, but Hoover was a more-than-capable man who stands as a unique member of the American presidency. Whyte’s new biography is a fascinating exploration into a man hard to pin down, but is well worth the time.