Alice Cooper with Halestorm in Houston 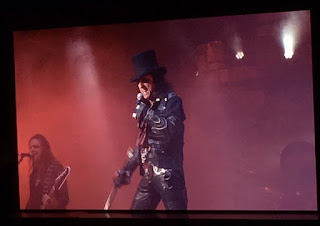 The year 2019 began with discovering a unknown-to-me Alice Cooper record, so it was altogether fitting that the original shock rocker himself toured during the summer of 2019. Back in January, my son played Welcome 2 My Nightmare, the 2011 follow-up to Alice's 1975 Welcome to My Nightmare. Love this record, especially the opening track, "I Was Made of You," a powerful slow burn rock song that would be great as an opener. The album surprised me as I had barely heard any Alice Cooper music for nearly my entire life.

My son, who has continually expanded his collection of Alice Cooper album, and I caught the show in Houston last night, and it was incredible. It was no surprise Cooper put on a great show, but what really surprised me last night was the opening act.

The Discovery of Halestorm


Last night, I went from "Who the heck is Halestorm?" to "Holy cow, you've got to listen to Halestorm!"

Sure, I could have looked up their music ahead of time, but I wanted their show to be new on the spot. So glad I did. This four-piece band is led by a charasmatic lead singer/rhythm guitarist named Lzzy Hale. It's not everyday you see a female-fronted rock band that is this damn good. She, however, is incredible. Her singing voice is a unique mixture of gravel and clear, depending on what she wants to do with it. Her guitar playing keeps the band's music humming, but she can cut a solo pretty darn good. More importantly, she was having an absolute blast. Sure, she's snarl on some songs, but more often than not, when she'd leave the mic, she was grinning, like "Can you believe this is my job?" 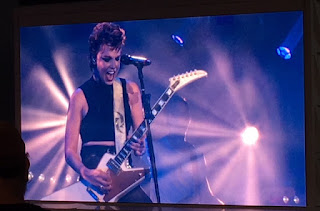 The opening tunes were good, but by the end, I was sold. Heck, that last song, with its extended guitar solos, all but morphed into the chord pattern and rhythm of Chicago's "25 or 6 to 4." My ears may have been hearing what I wanted to hear, but I could have sworn part of the lead guitarists notes were homages to Terry Kath.

Check out Halestorm live if you can. You'll be standing and cheering by the end of their set.

The Shock Rocker Himself


Alice Cooper is touring behind his Ol' Black Eyes is Back show which features what seems like not only a greatest hits show, but a greatest hits of stagecraft. His stage setup resembled some Gothic castle with an upper part and the main stage below. The drum kit was off to the left side which enabled the giant central door to to center stage.

Much like David Bowie's arrival on this very same stage in 2004, Alice knows his silhouette is unique. So after the extended introduction, the curtain fell, the band turned it up, and there he was, on the top, waltzing down with a top hat and cane. 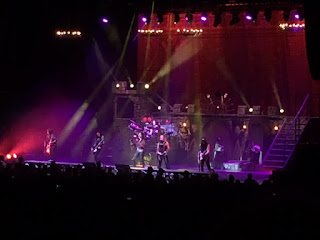 Cher's got nothing on Alice. With almost every song, Alice would alter part of his wardrobe. A few songs later, Alice brought out maracas with lights on them. Maracas in a rock band? Yup. He brought out a bloody crutch for Eighteen, a sword (foil) for Billion Dollar Babies, and a riding crop for Poison.

Aside from his wardrobe changes, every now and then, he'd have various stage hands, all dressed in costume, come out and be part of the show. Sometimes they'd appear as knights, other times, as mental asylum attendants complete with baby-faced masks. The entire show, Alice never broke character. He knew where the cameras were and played to them, snarling with aplomb and giving the audience all it wanted.


In any given rock back, you have a lead guitar. The Alice Cooper band has three, each of whom could front their own band. Here, they're just part of his band, but each gets to shine.

In an evening of discovery, one of the three was Nita Strauss. Given everyone's long hair, it took me a song before I figured out she was a she. Cool, I thought, Alice has a lady guitarist. She was no mere guitarist. She is a phenom. She shredded as good as I've ever seen. She was incredible, as was the other two guys in the band. 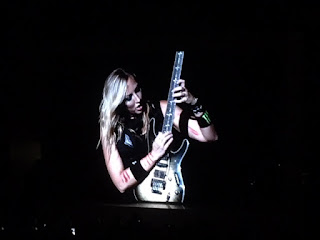 I may have waited nearly fifty years to catch my first Alice Cooper concert, but it was well worth it. Absolutely loved the show last night and the discovery of Halestorm. If you have a chance to catch this show, buy a ticket.
at August 02, 2019
Email ThisBlogThis!Share to TwitterShare to FacebookShare to Pinterest
Labels: Alice Cooper, Chicago, Glam rock, Halestorm, Houston, Houston music, Live Music, Terry Kath