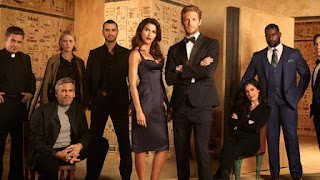 I cannot think of a better way to spend a summer than watching the CBS series Blood and Treasure.

As I wrote back in May when I watched the first episode, this series had me from the promos. A show with two attractive leads on on globe-trotting action/adventure expedition, hunting for Egyptian artifacts, complete with secret organizations and near-death escapes? This is exactly what I want in a show.

And Blood and Treasure delivered. Every single episode, culminating in Tuesday's season finale. If you thought you knew where things were headed, chances are good you were wrong.


Anchored by the two leads--Matt Barr playing Danny McNamara, a former FBI agent with a deep knowledge of art, and Sofia Pernas, playing Lexi Vaziri, a master thief who has her own personal reasons to join the chase--the cast of Blood and Treasure add up to more than the sum of its parts. Barr and Pernas are part of the long tradition of characters who love/hate relationship depending on the circumstances, but must work together to achieve their goals. I'm thinking Castle and Beckett, Moonlighting, the Brendan Frasier Mummy series, the National Treasure movies, and so many more.

As a writer, I appreciated how the Blood and Treasure writers allowed Danny and Lexi to grow and learn from each other, taking from the other aspects the individual doesn't have. It culminated in a wonderful scene in the finale in which each of them is faced with a challenge and they do what the other would naturally do. Loved it. Brought a huge grin on my face, especially when Danny crashed through an overhead window, dropping into a room holding onto a fire hose, and taking out the bad guys. Like I wrote on Twitter, I've been waiting all summer for that.

I also appreciated how the writing team met and overcame the obvious will-they-or-won't-they problem. From episode one, you know they will get together. It's just a matter of time. Harder still is the flip side of the equation: when the inevitable rift forms, will it be something artificial or organic from inside the show. One of my favorite recent shows was Castle, and by season eight, those writers created such a ham-fisted means to separate the two leads that I great to dislike it. I'm happy to report with Blood and Treasure, the fissures are organic. Danny and Lexi do get together, but then they separate in a way completely believable. That they end up together is, well, natural.

Barr and Pernas make a great team, but they are nothing without their co-stars.

The Rest of the Cast


In a show in which one of our leads--Danny--is a law-and-order man who occasionally steps over the line, you need another law-and-order type to remind him of the road he almost always takes. Enter Gwen Karlsson (Katia Winter). She's a straight arrow agent (most of the time) who ends up on Team Danny/Lexi by the end of the series. And she gets a wonderful, kick-ass scene toward the end of the series where she fights hand-to-hand against a masked intruder. I enjoyed her character arc because she also sees the validity of stepping over the line.

Throughout the series, Danny and Lexi always bump into old friends and enemies, but I really appreciated one of Danny's friends being a priest. Mark Gagliardi plays Father Chuck, an old friend from Boston who now lives in Italy. When he first showed up, I thought of course Danny's friends with a priest. More subtext about rules and law and order. But Gagliardi plays Chuck as a man of the world, willing to bend the rules to help a larger calling.

And then there is Shaw. Ironically, the character of Shaw is played by Michael James Shaw. I can't help but wonder if the creators had a different name for the character before and changed it because of Shaw's presence on the set. Either way, the actor Shaw brought so much fun and life to the character Shaw that he became my favorite co-star. Big, brawny, but with enough heart and humor, Shaw falls into the typical role of trusted sidekick but he brings it all with a wink and a smile. I especially enjoyed the first half of the season when he wasn't necessarily working with our heroes, but kept bumping into them. Later, when he joined the team, he became a crucial component.

These five actors and characters, and specifically their chemistry, are what elevated Blood and Treasure into a truly entertaining summer show.


I'll admit I cannot relate every single detail of the plot. The thirteen-episode, thirteen week series had a lot of twists, turns, and revelations to it that propelled the plot and sent Danny and Lexi all over the globe. So I never minded the occasional reset/exposition scenes scattered throughout the series. It helped me remember crucial details that, in real time, happened weeks ago for me.

But I loved the Egyptian archeology plot. To be honest, that's what sold me on the show from the trailers. Sure, the show looked fun, but having Antony and Cleopatra being the McGuffins was so fun to play with.

The Structure of the Episodes


And I really enjoyed how the backstories of the various plot threads were interwoven. The interludes over a map with the years zooming in and out of the present was like a literal map for the story. It gave off a Indiana Jones vibe that I know creators Matthew Federman and Stephen Scaia did on purpose. And don't get me started on all the in-jokes scattered throughout the episodes. I especially enjoyed the musical homage to Indiana Jones and the Last Crusade when  Danny and Lexi visited Venice. It must have been so much fun to write this show, determine what references to include but not be ham-fisted about it. To be a writer in that writer's room must have been a blast.

The Big Twist at the End


With a sub-title like that, you know I'm going to reveal the ending. But, I'm also assuming if you've read this far, you already watched the finale. Fair warning.

The big reveal of Simon Hardwick (James Callis) Jay Reece's (John Larroquette) real son--and the real enemy--I didn't see coming. But it made perfect sense. But do you know what else it made me want to do? Rewatch the entire series. Just like when you get to the end of The Sixth Sense and you know the truth, you can watch it again and see how M. Night Shyamalan structured the film. The clues were there all along. I want to re-watch Blood and Treasure to do the same thing with an eye to Hardwick. Was it there all along? I'm hopeful there's going to be a DVD of this show so I can re-watch. Then again, it's probably already on CBS All Access. With Star Trek: Picard already the thing that'll make me subscribe to the service, might as well start early and enjoy this show again.

In Praise of the Network Schedule


In an era of binge watching our favorite TV shows mere hours after they are made available, I very much enjoyed the weekly format of Blood and Treasure. Granted, I rarely binge anything, even when a show is available to do so. I much prefer weekly episodic television. It gives me time to think about the show throughout the week, and then build excitement to air time.

Specifically for Blood and Treasure, however, watching it carried me through the entire summer. It started in May, after the main shows had aired their season finales, and took me all the way to a week before school starts. Every Tuesday, I would get my glass of wine and be treated to a wonderful show. I was able to talk about it to folks and, in one of my favorite things to do, follow the live tweets from Stephen Scaia. I loved the communal nature of watching a show at a given time where all viewers are doing it at the same time. And Scaia's tweets always gave glimpses into the production, including that musical cue I referenced above. It's the behind-the-scenes aspect of the show that I'm interested in that I'm hopeful we'll get a DVD set.


Blood and Treasure is one of a triumvirate of shows that carried me through the summer of 2019. The other two--Elementary and American Ninja Warrior--were known quantities. The promos for Blood and Treasure were what got me excited for the show. All the ingredients of the show--the creators, the writers, the actors, the settings, the globe-spanning and historical plot--mixed together and produced something greater than the sum of its parts. This show is all you could want in a summer show and more. It's entertaining, thrilling, funny, and romantic. I cannot wait until the summer of 2020 when Blood and Treasure will debut its second season and entertain us again.
at August 09, 2019
Email ThisBlogThis!Share to TwitterShare to FacebookShare to Pinterest
Labels: Blood and Treasure, Summer TV, TV Shows