Heart in Houston: Keeping the Music Fresh and Powerful

On Thursday night, my family and I went up to The Cynthia Woods Mitchell Pavilion in The Woodlands (just north of Houston) and saw Heart with Joan Jett and the Blackhearts and Elle King. We actually arrived too late to see Rob Schneider's daughter, but thoroughly enjoyed both Joan Jett and Heart. When it comes to summer concerts, there is no other place than the Mitchell Pavilion that I'd rather be. The vibe is wonderful. I always buy lawn seats because there are few things better than sitting in a small chair on a grassy lawn, under the stars, and listening to great music.


Joan Jett is a trailblazer. There she was on stage, leading her five-piece band, dressed in black leather, jamming during her entire set. I was struck by her appearance. Not only does she look just like she did thirty years ago, but I thought back just two weeks ago when the band Halestorm opened for Alice Cooper. Lzzy Hale fronts Halestorm and she is a direct descendant to Joan Jett, even down to Hale's wardrobe.

Jett and the Blackhearts delivered the exact set we all wanted, included an unknown-to-me version of Sly and the Family Stone's "Everyday People." Boy is that a message as timely as ever.


By the time the lights went dark and Heart stepped on stage, I sat up in my chair. The crowd started cheering and, out of the darkened stage, Ann and Nancy Wilson appeared. As part of my Legacy Rock Tour--that is, seeing as many legacy rocks acts while we still can--there's something magical about seeing veteran artists for the first time. I'm a casual Heart fan, a greatest hits fan, but when those two ladies walked out on stage, I started grinning ear to ear. There they were!

And man, they have not missed a beat. For a total of sixteen songs, Ann and Nancy Wilson led the band through cover songs and original material. Ann's voice is still powerful, filling the covered part of the pavilion and washing over the capacity crowd on the hill. The harmonious blending of their voices waxed and waned depending on whom sang lead. Very happy they included the Moog synth on Magic Man since it takes me back to the mid 70s.

The covers were an interesting choice. There was a three-song mini set, starting with Yes's Your Movie, then I Heard it Through the Grapevine, and a wonderful version of The Boxer with Nancy singing lead while playing acoustic guitar.

The Rhythm of the Band


A word on Nancy's playing. This being the first time to see the band, I knew she played guitar, but I didn't know how well her rhythm playing was. I'm a sucker for a great rhythm player. Imagine the Beatles without John Lennon's guitar, KISS without Paul Stanley's playing, or Metallica without James Hetfield. Can't do it. Neither can you be without Nancy's playing. She drove the band, leading it through the tunes. Frustratingly, the camera operators focused on her playing infrequently, but when they did, it was impressive. 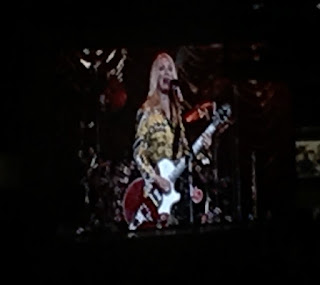 What was also impressive was Ann's voice. We all know veteran rock singers lose a step or two as time takes it toll. It's part of the aging process for everyone. Ann, however, still has a powerful singing voice. I've been recently introduced to the band's 2016 album, Beautiful Broken, and I enjoy it quite a bit. In some of the more orchestral songs, I wondered how Heart never got tapped to record a song for a James Bond film. It's a natural choice, and Ann would be able to belt it out with the best of them. 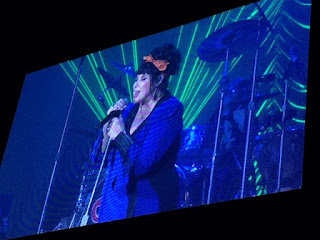 
The choices the band made were great. While I wondered why they chose covers over some of their other hits, what they did with the hits was a nice change. For all the on-stage wizardry of bands who can play their greatest hits just like the record, it's a refreshing change to hear a band like Heart change up the instrumentation of some of their songs. These Dreams, in particular, had much of the 1980s sheen stripped away, leaving a more organic and natural version of the song that is, frankly, better than the original. Same with What About Love, and the inclusion of tasteful bongos. Minstral Wind is a tune I don't know, but it served as the nice atmospheric extended jam before kicking into Crazy on You. That song still rocks.


When they came back for the encore, I ticked off songs they hadn't played. We all knew they'd end with Barracuda, so that meant we'd get renditions of All I Wanna Do is Make Love to You, Alone, and some other hit from the 80s. What we got instead, was Stairway to Heaven. From the opening chord, I recognized the song. I turned to my family and voiced the obvious question: "Why?"

Well, there was a reason. Over Nancy's acoustic guitar, Ann sang those familiar words. Line by line, verse by verse, I was swept away. Through the slow parts, her voice was so powerful that I gradually looked forward to the inevitable: Ann Wilson singing the fast part. Brilliant. As my wife said and I agreed: second best version of this song we ever heard.

And that's why I am so glad we got tickets for this tour. If you haven't ever seen the band, or you haven't seen them in a long time, get your ticket today.
at August 23, 2019
Email ThisBlogThis!Share to TwitterShare to FacebookShare to Pinterest
Labels: Houston music, Legacy rock, Live Music