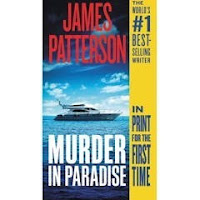 THE LAWYER LIFEGUARD has some pretty good twists and turns and, most important of all, I was entertained. I was happy to turn away from the TV for those two reading sessions. Granted, I’m a reader so I’m an easy mark, but this is the kind of book that might get a non-reader to open a book and read. And that’s a great thing.
at May 16, 2019
Email ThisBlogThis!Share to TwitterShare to FacebookShare to Pinterest
Labels: book review, James Patterson