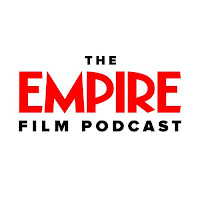 Sometimes, it's a good idea to get a different perspective on something you love. Then again, it's also cool to know geekery knows no national boundaries.

Unlike The Ralph Report and Fatman on Batman which I reviewed the past two days, I'm not sure how I first discovered the Empire Film Podcast. Likely it was a referral from some other podcast or blog. Nevertheless, I found it and now it is definitely one of my go-to podcasts for film news.

What Makes It Different


The power of the main magazine, EMPIRE, can snag interviews with just about any celebrity promoting a film. I'm not if this is correct, but my sense is that EMPIRE is the biggest magazine in England about films. Probably like ENTERTAINMENT WEEKLY is here in the US. What makes the podcast portion of EMPIRE really good is it goes beyond the standard piece you'd read and digs into the movie and the guests.

Host Chris Hewitt does many of the interviews, but not all. Like any good interviewer, he asks the guests about the movie and does the standard things you'd expect. But with a podcast, a conversation develops that can often go beyond simply promoting the latest action or superhero movie and uncover some nice aspects of the actor. A recent example was the interview with Zachary Levi of Shazam. In the interview, Levi was very open about how training for the role of the original Captain Marvel--or Captain Sparkle Fingers in the movie--helped turn his life around.


If the main interview is the main part of any given episode, it's the review section that's just as entertaining. Hewett has a core group including Helen O'Hara, James Dyer, and Ben Travis. They talk about the week's news, diving deep into the latest movie and reviewing it. They have a British perspective, which for all our commonalities, can be different. It's the differences that really make this podcast special.

In addition, I like their critical voices. Like Marc Bernardin, the Empire Film Podcast crew will pick apart things that didn't work for them, even if the overall film was entertaining, fun, and a joy. They always challenge me to see what they see, think about it, and come to my own conclusions. Often, I'm nodding my head while driving, smacking myself for not seeing it on my own.


With their special access, Hewitt and crew will hold forth on all things spoilery in a film. Often this will include an in-depth interview with the creators of such film. Just this week, they have a nearly four-hour episode as they discuss Avengers: Endgame.

But what really capped off my love for spoiler specials was Hewitt's interview with director Christopher McQuarrie. Last year, McQuarrie and Hewitt sat down and discussed Mission Impossible: Fallout for over seven hours. Yes, you read that correctly. Seven hours.

And I wasn't bored in the least. Heck, I could have listened to more. But with that amount of time, McQuarrie would discuss the lighting for twenty minutes on just one scene. The experience was so much fun that I ended up seeing the film a second time in the theater, then knowing all the details.

I'm now waiting for the spoiler special with the directors of Endgame. I want to listen to it before I see the movie again.

If you are a fan of movies, you owe it to yourself to check out The Empire Film Podcast.


...for a first KISS.
at May 08, 2019
Email ThisBlogThis!Share to TwitterShare to FacebookShare to Pinterest
Labels: Movies, Podcasts