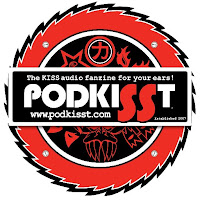 KISS is my first favorite band. They introduced me to rock and roll. I bought the trading cards and the comics and a few posters back in the 70s. I got a thrill when the put the make-up back on in 1996. They have brought me countless hours of joy and happiness despite some of the eye-rolling stuff the individual members or the band itself have done. They continue to provide me joy as I sing along to the songs with the windows of my car rolled down. I already have tickets to their Houston show in September.

Yet, there's a certain number of music fans out there who take pleasure in zeroing in on all that bad stuff, elevating it above all the good. There's enough bad in the world. Why spend the energy in the negative when you can revel in the positive?

Naturally, with the growth of podcasts, there emerged KISS-themed podcasts. Pod of Thunder examined every KISS studio track in detail per weekly episode. There is Podcast Rock City, KISS FAQ, and KISStory Science Theater to name but three more.

But there is one podcast that stands head and shoulders above all the rest. It was the first, and one of the members who was there at the beginning is now nicknamed the Podfather.


By 2007, newer members Tommy Thayer and Eric Singer had taken the place of Ace Frehley and Peter Criss, wearing the iconic make-up. That never sat well with some folks, and they often voiced their disapproval. Vocally and loudly, including on various podcasts.

Needing a haven for some positive comments combined with constructive criticism, Gary Shaller and James Hager started the PodKISSt,  with the tagline "The fanzine for your ears! We celebrate all." First and foremost, they are fans of the band. PodKISSt was intended to be a place where people can listen to various episodes, interact with fellow fans on Facebook and other places, and just revel in the broader KISS family.

Twelve years later, PodKISSt is still going strong. There have been a few personnel changes over the years. Now, Ken Mills, the Podfather, is the man behind the microphone, and he has maintained not only the high level of quality but reinforced the positive vibes PodKISSt promotes. His genial laughter always lightens the mood. His personality brings a calmness to the proceedings, making PodKISSt one of those places where you can listen and just smile.*

Everyone Has a KISS Origin Story


Whenever a new guest comes on the show, one of the first questions asked is how the person discovered KISS. There are quite a few of my age who first encountered the band in their 1970s heyday. Others arrived via the non-make-up years of the 1980s. Still others came on board in the 1990s. No matter the origin story, it was the music that brought people together, and it is a show like PodKISSt that celebrates all eras.

I particularly enjoy the origin stories from the 70s when then-young kids first heard about this dangerous band called KISS. Ken Mills has a particularly great story. I wasn't able to pinpoint the exact episode in which he delivers this fun story, so you'll just have to listen to all the episodes.


It's the music that brings everyone together, so naturally most episodes talk about that particular blend of rock and rock KISS produces. For these episodes, the hosts gather a round table of fans as they discuss albums track by track. They dive deep into what was going on at the time, and each person gives their takes on the songs.

Not everyone likes every song. Shocker, I know, but there is room for everyone here at PodKISSt.

I always learn something on these album spotlights. Sometimes the content is so in-your-face obvious that you wonder why you never noticed it yourself. This month is the fortieth anniversary of Dynasty. On some of the first pressings back in 1979, the songs were listed in a different order. In the latest episode, the PodKISSt folks listened to those same nine songs but in this other order. Viola! A whole new perspective. Who knew?

But there is one episode I've heard more than once.

The Album That Never Was


Episode 76 is one that makes the observation that 1978 is the only year KISS didn't release an album from 1973-1983. They released the four solo albums, containing 41 (?) songs. Each member of the round table took turns making their own KISS 1978 album from these songs, complete with marketing plans, album covers, and the like. It's a great episode. Not coincidentally, I think 6 or 7 of the same songs were picked. It would have made for a really good 1978 album. I even did it myself.


This is not a podcast purely made up of folks talking about KISS. As the PodKISSt has grown and acquired a good reputation, various celebrities have been interviewed. It might be JR Smalling talking about touring with KISS in the 1970s or Adam Black discussing about KISS comics. There's something for everyone.


I love KISS. Maybe you do, too. If you love this band that's touring for the last time and you haven't discovered PodKISSt, then I highly encourage you to do.


...for the monthly KISS party!

*Ken has even opened my ears to the music of Cheap Trick, the subject of another podcast he hosts.
at May 09, 2019
Email ThisBlogThis!Share to TwitterShare to FacebookShare to Pinterest
Labels: KISS, Music, Podcasts

Well-said, Scott! We're on the same page here, from the '70s Donruss cards all the way to the present. Glad you found Cheap Trick as well!
:-D