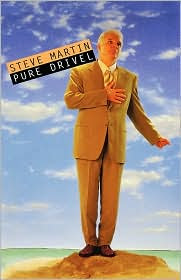 If Steve Martin were a Batman villain, who do you think he’d be? The Penguin? Well, Martin does have the nose but it’s not long enough. Then there’s the question of weight. That’s okay; we’ll use a fat suit. The Joker you say? Yes, but only to a degree. You’d have to have Martin circa “The Jerk” for that role. Hmmm, Jerk -> Joke -> Joker. That might work. But there’s still the problem of make-up. Have you ever seen Steve Martin in make-up? Didn’t think so.

No, I think the best villain for Martin to portray is Two-Face. Why? Because his career has a certain duality to it. Triality, really, if you include the stand-up work he did early on. But now I’m just making up words. Okay, back to the point. Steve Martin on camera has gone from the “wild and crazy guy” to serene, older gentleman, almost reserved (British?) in his comedy. Younger viewers, those around twenty, have only known the serene comic Martin has become. They’d be amazed that he used to be, well, wild and crazy.

When Martin is not in front of a camera, he likes to write. Back in the 1990s, he was asked by New Yorker editor Tina Brown to contribute several short comedic essays for her magazine. They and some other pieces are collected in Pure Drivel. And it is in these essays where Martin’s genteel, droll, yet baroque comedy comes out.

There isn’t a one you can read without at least one audible chuckle. Most of the chuckles, guffaws, or eye-rolls happen with the strange juxtaposition of two, unrelated sentences thrown together, like oil and water. Take these two sentences from the Acknowledgments, referring to the essays in the book:

They are the offspring of an intense retrospection that enabled me to get back in contact with my work, to receive pleasure from my work, and to bring joy to my work. They also enabled me to repeat the phrase “my work” three times in one sentence, which brought me a lot of joy, pleasure, and contact.

Martin’s essays rarely go longer than four pages, if that. He riffs on L. A., New York, Lolita at fifty, relationships in the form of break-up letters, and the imponderables of Schrödinger’s Cat. What, you don’t remember Schrödinger’s Cat, the one who can be considered simultaneously alive and dead? Well, then, do you know about George Hamilton’s Sun Lamp?

George Hamilton is dropped into an empty rental space next to a tanning salon on the dark side of the moon. There is no way into the salon except through an exterior door, but if George exits, it could mean dangerous exposure to deadly gamma rays. George could open his own tanning salon by tapping the phone lines from next door and taking their customers. And yet George is cooked when he exits the rental space while using a silver-foil face reflector.

It’s almost like getting whiplash when reading some of Martin’s material. The punch line comes at the end (the foil face reflector) but the understated, sneaky humor comes in the previous sentence, the one about tapping the phone lines and stealing the salon’s customers. It’s the extra little details like that third sentence—the kind of sentence most all writers would never even think to include—that makes Martin such a creative and intelligent writer.

Speaking of writers, he does have some good tips for writers. It’s a craft he sums up in the essay “Writing is Easy.” Martin on writer’s block: “Writer’s block is a fancy term made up by whiners so they can have an excuse to drink alcohol.” Martin on writing dialogue: “Simply lower your IQ by fifty and start typing.” Later, in an essay on the side effects of a drug, he writes “You may find yourself becoming lost or vague; this would be a good time to write a screenplay.”

There’s also a winking absurdity to some of the selections. Take, for example, “Changes in the Memory after Fifty.” Martin gives the reader four steps to pass away thirty minutes.

1. Place your car keys in your right hand.
2. With your left hand, call a friend and confirm a lunch or dinner date.
3. Hang up the phone.
4. Now look for your keys. (For answer, turn to page 21 and turn book upside down.

Sure enough, you to page 21, there is a sentence printed upside down. It reads: “The car keys are in your right hand. Please remember to run the book right side up.” True, this essay isn’t laugh out loud funny but the mere fact Martin dreamed it up says a lot about the way his brain works. I’m glad I don’t live in it.

I could practically quote the entire book, there are so many funny lines. To be honest, they get funnier on multiple readings. Where I didn’t laugh the first time I read something, I’ll inevitably find myself laughing on the fifth reading.

Of all the essays, my favorite and the most inventive is “Times Roman Font Announces Shortage of Periods.” The essay, three-and-a-half pages, roughly a thousand words all discussing how the font is offering suggestions for other punctuation, uses only one period for the entire piece. On the page, you can see how Martin writes his sentences in order to fit his parameter. He even uses a backward period: “.period backward the in slip you while moment a for way other the look to sentence the getting is trick only The” Even when you get to the end, you’ll find yourself re-reading the piece just to verify he uses only one period. He does. Trust me. I’ve read the essay over a dozen times.

Even the blurbs on the back jacket of the book get into the act. Bruce McCall writes: “Steve Martin is the only comic performer today who genius translates intact to the printed page as in this hilarious collection. So writing a blurb for Steve is like pouring a drink for Boris Yeltsin—entirely unnecessary, but a considerable privilege.”

As a writer, I enjoy studying why these little comedic gems are so funny. But, usually, I just chunk that part of my brain and just read for fun and laugh. I think you will, too.
at December 05, 2008
Email ThisBlogThis!Share to TwitterShare to FacebookShare to Pinterest
Labels: Friday's Forgotten Books

I have always enjoyed Steve Martin's books and films. One of my favorite skits of his was
The Great Flydini on The Johnny Carson Show. It's probably the only magic performance ever billed as a open-zipper magic act.

Great information about writing! If you ever need any help with proofreading, editing or research check out DigitalEssay. They are a great resource for personal, educational or business writing needs. The website is DigitalEssay.net