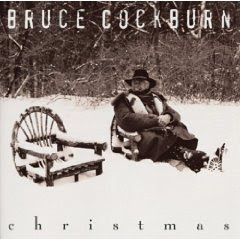 (The second in a short series about my favorite Christmas recordings. Previous entry: Chicago.)

When I met my wife a decade ago there was only one singer by the name of Bruce. With apologies to Bruce Hornsby, when I spoke of “Bruce,” it was only Springsteen. My wife, however, introduced me to another Bruce by the last name of Cockburn (pronounced like James Coburn’s last name). Now, we have “My Bruce” and “Her Bruce” (although I pretty much still refer to Springsteen as “Bruce” and Cockburn as Cockburn).

Bruce Cockburn is a guitarist, singer/songwriter from Canada who has released twenty-nine albums in a career spanning forty years. If the casual fan knows any of his songs (I didn’t), it would either be “Wondering Where the Lions Are” (1980) or “If I Had a Rocket Launcher (1984). His songs are politically minded and his music is almost always acoustically based, all the better able to show off his fantastic guitar prowess. In 1993, he recorded “Christmas,” his collection of carols and obscure songs. He arranged all the songs to fit into his acoustic range and the results are remarkable for what they are not: the usual sounding songs at least one radio station per city plays 24/7 for a month.

In interviews in 1993 and in the liner notes, Cockburn expressed the desire only to sing carols and not the secular material so often heard at this time of year. It hearkens back to his childhood (born in 1945) where there was still an element of the spiritual associated with December 25. In some of the more obscure carols he selected and arranged, there’s also an element of mystery present. Not a bad thing, really, considering the event celebrated at Christmas was full of supernatural power.

Of the fifteen songs on this album, you’ll know at least seven right off the bat. “Adeste Fidelis” is an instrumental here while “God Rest Ye Merry, Gentlemen” and “O Little Town of Bethlehem” and “It Came Upon a Midnight Clear” come across as fluid tunes with enough space to allow you to hear, understand, and, most importantly, contemplate what’s being sung. As Cockburn himself writes in the liner notes, “"One of the guiding principles which I tried to hold to in making this album was that pieces as familiar as this one are still songs, written by songwriters, with lyrics that often make sense and are beautiful.” His arrangement of even the most traditional of carols, “Silent Night,” lets the meaning of the words float out and into our brains. In certain interviews, Cockburn laments that too often Christmas music is the aural wallpaper of December where we don’t really hear anything being sung.

The treat of this album are the obscure songs. I grew up in church and there were a couple of pieces I’d never heard before. “Riu Riu Chiu” is a Spanish song from the 16th Century. Sung in Spanish, the song tells the story of how God sent the shepherds to protect Mary from the wolves in the forest. The lyrics go on to be more Easter than Christmas. “Down in Yonder Forest,” as Cockburn writes in the liner notes, might win the prize for spookiest Christmas song and he’d be right. Musically, wind chimes and dulcimer evoke a stark, winter’s night while the lyrics drone about Mary, Jesus’ birth, and his death. Les Anges Dans Nos Campagnes (“The Angels in Our Midst”) is an eighteenth century song Cockburn sings in its original French. And a couple of songs (“Early on One Christmas Morn” and “Mary Had a Baby”) both benefit from a ragged, old-time gospel flavor.

All throughout this disc, Cockburn and his fellow musicians rarely plays any electrical instruments. He allows the acoustic qualities of his guitar, dulcimer, and the other instruments to lend their unique tonalities to the overall feel and spirit of these carols. Cockburn often uses different tunings on his guitar to bring about different base sounds. For example, in “God Rest Ye Merry, Gentlemen,” you can hear the low E string rattle and ping the fret board, evoking a nostalgic quality, as if Cockburn himself were sitting in a pub in Victorian England and couldn’t afford a better instrument. The music and instruments on this disc stirs up a naturalist, earthy vibe. It’s a nice change from the often over-produced character of most Christmas CDs.

In all, Bruce Cockburn’s “Christmas” proves a nice antithesis to the stuff you’ll be hearing all season. Don’t get me wrong: I love that stuff with a passion that my family constantly finds surprising. Just look at last week’s review and next week’s. But in between, there is room for something different, something that will make you pause and think what the season is really all about.

Note: Cockburn's myspace page and The Cockburn Project are the best online resources. The Cockburn Project has links to news, interviews, and, most importantly, guitar tabs and tunings.
at December 09, 2008
Email ThisBlogThis!Share to TwitterShare to FacebookShare to Pinterest
Labels: Music

Canadian Tire is giving away the Bruce Cockburn Christmas CD away for free with purchase on Saturday December 13, 2008.

Peeved this morning that my windshiled wiper broke in the middle of a hectic Christmas season, I bought a replacement at Canadian Tire. "You want a free CD with that?" the clerk asked. She threw it in the bag before I could grumble a "Nah."
It turns out the best things in life are free. Bruce Cockburn's "Christmas" CD ignited my previously absent Christmas spirit. Could it be that the true meaning of Christmas can be found in the spiritual and not the commercial? The mix of traditional and sometimes obscure music is truely inspirational.
I love it, and am now glad my wiper broke.

Listening to Cockburn's Christmas this morning and decided to Google it, bringing me to your thorough review. Thanks. Over the past ten years this has held my top Christmas album spot. Such artistry, and so different than the standard fare. (Your Chicago Christmas album a quality pick too.)

Went to Canadian Tire today and saw these cds in a small bin marked free. Nothings for free these days. Been listening to it all day today - what an undiscovered treat. Looked on the back date 1993. Top notch CD sound mastering it sounds superb. Will treasure this for many years.

I am the sort of hombre who passions to seek unprecedented stuff. Presently I'm making my private solar panels. I am making it all alone without the assistance of my staff. I am utilizing the net as the only way to acheive that. I stumbled upon a really awesome website that explains how to contruct photovoltaic panels and so on. The internet site explains all the steps required to solar panel construction.

I'm not exactly sure about how correct the information given there is. If some people over here who have experience with these works can have a look and give your feedback in the page it will be grand and I'd extremely appreciate it, cauze I extremely like [URL=http://solar-panel-construction.com]solar panel construction[/URL].

Tnx for reading this. You people are the best.

Great album, great review.. I'd like to cover "Riu riu chiu" with my acoustic trio. Would you know where I could possibly find the guitar tab for this song, or have any idea of the guitar tuning Bruce used on it ?

This is really interesting because I had never listened about
Bruce Cockburn I think that you should to share with us some links of his projects and songs because I want to know more about this guitarist.