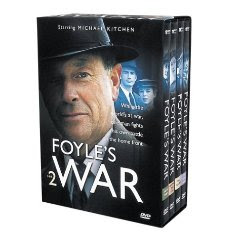 If Season One of “Foyle’s War” considered the emotional impact of the war on regular folks, Season Two emphasizes the war’s toll on the home front. (Here is my review of Season One.) Not that the four episodes of Season Two don’t involved emotion. We are talking about war, after all, the single most emotional event save love that can affect a person. Instead, Season Two focuses on something more fundamental: even in war, humans are still human. It may not matter that young men are laying down their lives for a cause, some people still want to make a buck, or a pound in this case. It’s absurd, it’s repugnant, it’s, well, human.

I have already reviewed Episode 1, “Fifty Ships,” (set in September 1940) in depth as it was the first episode I watched. Again, I want to stress that you should watch these shows in order. You will get much more out of them if you do. Needless to say, the end of “Fifty Ships” merely set a template for the rest of Season Two.

“Among the Few” (Episode 2, September 1940) finds Detective Chief Superintendent Christopher Foyle and his driver, Samantha Stewart, driving back to Hastings when they see a fuel truck ram through a road block. Setting chase, Foyle and Sam avoid the flying bullets and watch as the truck crashes and the driver perishes. Foyle recognized him and starts his investigation, aided, as always by Paul Milner, now walking with only a limp and no cane (the result of a leg amputation from a war injury). When the Nazis invaded France earlier in 1940, the Germans merely used the fuel the French abandoned. The English learned from those mistakes and consolidated all the fuel at regional depots located throughout southern England. The problem, however, is the local depot seems to be losing fuel. When his superior suggests a raid, Foyle proposes sending in an undercover agent. Using all of his natural gifts at manipulation (gentle, to be sure, but thorough), Foyle allows Sam to volunteer for the assignment.

Meanwhile, Foyle’s son, Andrew, returns home for a spell after a fellow RAFer (Rex) and he survived a battle in the skies. In a quiet, yet sobering scene, the kind that really provides depth of these shows, Foyle asks Andrew why the young man is so quiet. Andrew comments on the new recruits and laments their lack of experience.

Foyle: “Whereas you’re an old hand.”
Andrew: “You don’t see it. I’m an experience pilot now.”
Foyle: “You’re twenty-two.”
Andrew: “You sit there as if nothing’s happened. It’s not conkers anymore. It’s a different world. There’s Rex, Douglas, and myself, and we’re the three oldest.”
Foyle: “Well of course you are. You’re the only ones left.”

Foyle goes on to solve the puzzle of the missing fuel as well as the death of a young woman who dated Rex, Andrew’s friend. Rex is a suspect and, by the end of the program, Foyle ends up at the air field. The air raid sirens clang and the pilots jump in their Spitfires and fly off into the sky, his son among them. I won’t give away the ending. Suffice it to say the final scene—and the choice Foyle makes—is one to remember and will stay with you after the credit roll.

“War Games” is certainly an interesting title for Episode 3 (October 1940) considering the war is anything but a game. Foyle is the referee in a series of Home Guard practices on the vast estate of Reginald Walker when two things happen: a burglary and an apparent accidental shooting during the war games. To make matters more interesting, two men from Foyle’s past reemerge. One, the German-born Stephen Beck, is a naturalized British citizen and a friend of Foyle’s; and the other, Jack Devlin, is Foyle’s former sergeant (Milner took his place).

A man named Harry Markham is the burglar, and Stephen Beck, a barrister, is his defense attorney. Beck got Markham’s sentence reduced and now has a favor: steal something in the Walker estate. This Markham does but is injured. Foyle and Sam visit the estate to investigate the burglary and why the Walkers didn’t report the crime. Foyle continues to investigate until a murder occurs during the war games. The dead man is Markham. One thing leads to another and Foyle learns of secret business negotiations between Walker’s company and the Nazis and Beck’s clandestined role in everything. Foyle has no proof and Walker and his son start burning paper to conceal their culpability. In a humorous sub-plot, Sam is “in charge” of four boys scouring the town for recyclable material that can help the war effort. They abscond some of the bound paper from the Walker estate and, inside, is an incriminating document but it’s still not enough to convict Walker. What can is the item stolen by Markham. Where other episodes end on an emotional note, this ending is, quite frankly, pure American. And Foyle’s reaction to what happens says a lot more than you’d expect.

Among other things, “The Funk Hole” (Episode 4, October 1940) is an odd title, all the more tantalizing in that the characters in the episode all know what it is except Sam. Foyle and Milner get to tell her but you’ll have to read the extra details on the DVD to know from where the term originated. In Hastings, there is a robbery at a food depot. The guards fire and hit one of the fleeing men but they still escape. In London the same night, the Luftwaffe are bombing the city and a man in an underground air raid shelter starts mouthing off about Churchill and the “truth” of the war effort. The next morning, Foyle returns from London and starts his new investigation: the food depot robbery and the search for a missing young man, Matthew Farley, The distraught mother points the police toward Brookfield Court, the funk hole, where the rich can buy their way out of any sort of war participation. Sam and Milner start poking their noses around but then a problem arises: James Collier, police Chief Inspector, arrives from London and suspends Foyle on the grounds that he uttered seditious comments in a bomb shelter while in London. Flabbergasted, Foyle has to comply but not before Michel Kitchen displays some of the more animated acting in his reading of Foyle in the series. Collier takes over the department, reassigns Sam, and questions Milner’s loyalty.

Meanwhile, Andrew has crashed his Spitfire in the Channel and has a week’s leave. Foyle’s happy to have his son around but Andrew just mopes. Foyle asks Sam to take him out and that backfires, too. The investigation continues and it’s really Milner’s turn to have the spotlight. We get a glimpse of how Milner really is without Foyle around. It’s a tad eye-opening. We also get to see “how the other half lives” in all of its distasteful glory. In a move so subtle it’s easily missed, Foyle puts all the pieces together. Nothing strange there but then you realize he’s never actually interviewed anyone or found clues himself. All the data has been conveyed to him by another person, including Sam. He’s pulled a Sherlock Homes or a Nero Wolfe just without the idiosyncrasies.

Again, with “Foyle’s War,” the little details are the main selling point, even beyond the superb mysteries. The accurate historical details—the bombing raids, the existence of funk holes, the racketeering of fuel or food, the plight of household pets during the war—make this series stand heads and shoulders above other mystery series. By the end of this season, you might start wondering how the Allies won the war when the greed of regular people seeks to subvert the war effort for personal gain. You don’t need to wonder long, however. All you have to remember is the very creativity folks used for self-indulgence also was put to good use to win the war. I’ll admit it was an interesting feeling watching the fourth episode on December 7th. It makes me all the more hopeful that the stories of future Foyle’s War seasons go long enough for the United States to enter the war. I’d like to see that.

Question for anyone who might know: In many scenes in “Foyle’s War,” you can see British soldiers and civilians carrying boxes on straps around their shoulders. These are literal brown boxes and they seem cumbersome. What are they called and what’s in them? I think its either food, first aid supplies, or ammunition. But I still wonder why boxes and not bags.
at December 08, 2008
Email ThisBlogThis!Share to TwitterShare to FacebookShare to Pinterest
Labels: History, Movie/Music Mondays, Movies

these were standard issue government gas masks and civilians we're required to carry them at all times, for fear of air raids and gas attacks. these are the brown boxes with a single strap. Later in the war these became less cumbersome as there were cylindrical containers with thicker shoulder-straps. Good question