Sixty-Seven Years Later, THEM! Holds Up

What do Matt Dillion, Daniel Boone, Kris Kringle, and Mr. Spock have in common? They all battled giant ants in 1954.

I can't remember exactly when I first saw this 1954 film, but there's a sliver of a memory from the early 80s when I spent some summer weeks at my grandparents' house in Tyler, Texas and it might've been then. Moreover, I also can't pinpoint when I was re-introduced to this film directed by Gordon Douglas. Sometime this century. But it has vaulted to one of my favorite 1950s-era science fiction movies.

I watched it again over the weekend, first time in a few years, and boy does it hold up well. It is sixty-seven years old this month, and still packs some genuine suspense, especially during the anticipation of first seeing the ants and, of course, their sound effect.

The atomic bomb tests at Alamogordo, New Mexico, were only nine years old when THEM was released, and the unknowns about nuclear energy were still being learned. It is nuclear radiation that morphs the common small ant into the giant behemoths we see in the film.

The opening sequence is gripping and unsettling, as we follow a pair of New Mexico state troopers as they discover a little girl wandering in the desert. She's catatonic, in a speechless state of shock. Even as the troopers, one of whom is played by James Whitmore, investigate what happened to her family and a nearby store owner, they can't make heads or tails of the destruction. It's only when we hear that distinctive sound effect of the ants does the girl react. Cleverly, Whitmore and a doctor do not see the girl rise up from her resting spot, terror across her face, only to lie down again, eyes wide in fear.

That sound effect. Most every time, it precedes the visuals of the creatures, and it adds so much suspense for the viewer. I defy you not to have a little chilly twinge crawl up your spine when you hear it. One of the troopers hears the high-pitched sound and goes off screen to investigate. The last thing we hear is his own death scream. 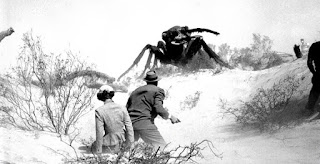 What struck me with this viewing is how the first half of the film is basically a crime film. There are the investigators--now including an FBI agent played by James Arness (Matt Dillon in Gunsmoke), and a pair of scientists, father and daughter, played by Edmund Gwenn (Kris Kringle in Miracle on 34th Street) and Joan Weldon--just trying to figure out what's going on. The monsters drop out of their own film largely because of costs, I assume, but the unknown facing the investigators makes for quite an urgent story. The investigators scour news reports and interview eyewitnesses--including Fess Parker (star of the Daniel Boone TV show) as a pilot who saw the queen ants flying west but is thrown in an insane asylum because of his wild story.
There's even a scene where our heroes discover another nest of ants, the workers protecting both a pair of queen ants and their eggs. Reminded me of Aliens (1986) and how many other monster films. 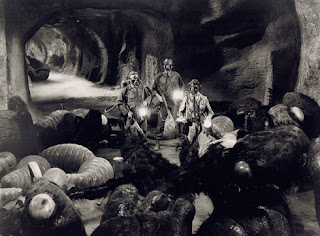 A young Leonard Nimoy (Star Trek's Mr. Spock) shows up as a soldier relaying information from the teletype machine. 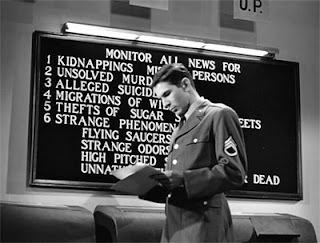 They finally figure out there's a nest in the sewers of Los Angeles. At this point, we jump to a more traditional monster film: humans hunting the creatures in darkened tunnels, the suspense escalating. That a prime weapon is flamethrowers lends itself to some gruesome imagery of the ants being consumed by fire. 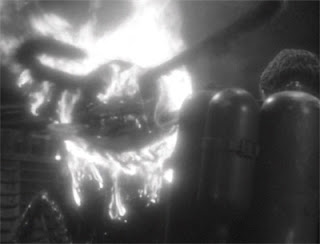 From a historical perspective, what I appreciate about THEM is how the soldiers and the scientists worked together. The military defers to the entomologists in the discovery of the insects, but the scientists don't want to preserve one for study, a trope in many films of this kind. No, the scientists know exactly what they need to do and work to that end. This is also a year after the Korean War where our military and the government is still held with a certain amount of respect by the civilians. Many of the side characters accept what the FBI agents tell them without question. I bet you'd get quite a different kind of movie nowadays.
We also get a potential lesson at the close of the film, as the last nest of ants are consumed by flames. "When Man entered the Atomic Age, he opened the door to a new world. What we may eventually find in that new world, nobody can predict." Looking to sixty-seven years to 1954 from the vantage point of 2021, we can see how many of the nuclear fears of the early days of the Cold War didn't pan out, and we're all relieved by it. But in our post-COVID pandemic era, when the origin of the virus is still not fully known, what are our fears now? What might the folks sixty-seven years hence--2088--think of our current fears. Will they pan out, or will they fester into something greater?
at June 08, 2021
Email ThisBlogThis!Share to TwitterShare to FacebookShare to Pinterest
Labels: 1950s, Movies, SF

I must have watched this movie a dozen times as a boy, but haven't seen it in the last several decades. Maybe it's time for a rewatch!

It's one of those films that probably played on every city's UHF channel. I think that's the channel that showed it back in the day for me. I wonder if Svengoolie ever featured it.