Seventy Years On, The Thing From Another World Still Delivers the Goods, And a New Warning 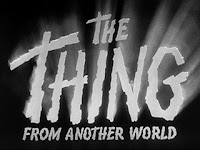 After watching Them! the other week, I decided to keep going and watch my other favorite science fiction film from the 1950s, The Thing From Another World. Released in the spring of 1951, this is a Howard Hawks's production based on "Who Goes There?" a novella by John E. Campbell from 1938. Chances are good you probably already know the plot--either from this film, the 1982 version starring Kurt Russell--but I'll give you gist.

Up in a remote scientific station in Alaska, a team of Air Force men led by Captain Pat Hendry (Kenneth Tobey) and reporter Ned Scott (Douglas Spencer) are sent up to investigate reports of a nearby crash. Dr. Arthur Carrington (Robert Cornthwaite) heads the scientific team and his secretary is an old flame of Hendry's, Nikki Nicholson (Margaret Sheridan). The men fly to the crash site and discover what looks to be a tail of an aircraft sticking out of the ice. They spread out to the edges of the dark shape under the ice and what results is one of the my favorite shots in all of science fiction films: they're standing in a circle and they've discovered a flying saucer. 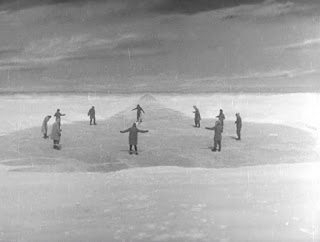 The team also discovers the pilot, frozen in a block of ice. Naturally, they haul the block back to the station and thus ensues the human conflict. Carrington wants to study the alien while Hendry follows the last orders he'd received prior to a winter storm: leave the creature in the ice. No one is happy, least of all one of the guys who is standing watch over the block of ice. He covers the block with a blanket--that just happens to be an electric blanket which is plugged in--and soon, the creature is defrosted.

After the team recover the Thing's severed arm--the result of a fight with the sled dogs--the scientists realize the alien is actually an advanced form of a plant. Convinced it is intelligent and envious of all the things he could learn from it, Carrington wants to communicate with it. Captain Hendry wants to kill it, especially after they learn the Thing feeds on the blood of the sled dogs and, naturally, two of the scientists it has killed. Interestingly, Carrington is willing to die for science and thinks all the others should be equally as willing.

The ensuing scenes follow the team as they try and figure out how to kill the Thing with the limited resources they have on hand. With this being a black-and-white film, we get some great shots. There's the one in the doorway. 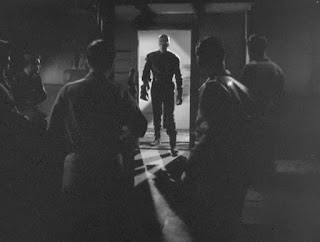 The Thing on fire. Carrington's attempt to "grow" new aliens from the blood plasma they have on hand for emergencies. 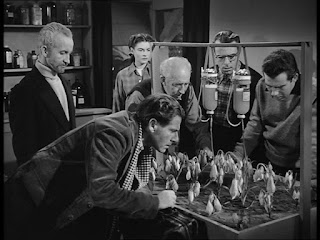 And the finale, where they design a method to electrocute the Thing. 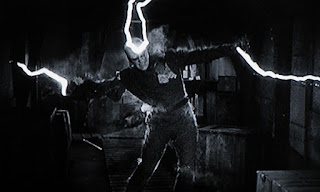 Science vs. the Military

In many SF films, there are always opposing sides to any first-contact issue, and they are on full display here. Unlike 1954's Them, the military guys don't trust Carrington and his scientific team to do the right thing, that being kill the alien. There's a line about the atomic bomb here that's used as the reason scientists can't be trusted. Coming only six years after Hiroshima and Nagasaki--and two years after the Soviets also got the bomb--the fear is palpable. Even the sporadic orders Hendry receives from his superiors wants him to keep the alien alive. But what are humans to do when confronted with a life form determined to survive itself using human blood? In Them, the lead scientist has zero qualms about killing the giant ants. In The Thing, the scientist is willing to die for knowledge.

The Limitations of 1950s Filmmaking

If you've read the novella or seen the 1982 version, you'll know that the Thing can actually shape-shift. Well, not really shape shift but more like it can imitate other forms it encounters, including other humans. Back in 1951, that would be a difficult thing to pull off convincingly, so Howard Hawks dressed up James Arness, the future Matt Dillon himself, as the alien and allowed him to wreck havoc on the humans.

I've always had a fondness for this version of the Thing and find it perfectly acceptable for its time. It's a great snapshot of American life in 1951, with the camaraderie of the military men and the discussion about settling down. Sure, it's not perfectly aligned with the novella, but the movie works on multiple levels. It's a basic Kill the Alien type movie while still being about American life in general, less than a decade after World War II and in the early days of the Cold War and the Korean War.

This fear is catalyzed perfectly in the last scene with a great, short speech by reporter Ned Scott.* Finally allowed to send out his story, Scott delivers the following:

Ned Scott: All right, fellas, here's your story: North Pole, November Third, Ned Scott reporting. One of the world's greatest battles was fought and won today by the human race. Here at the top of the world a handful of American soldiers and civilians met the first invasion from another planet. A man by the name of Noah once saved our world with an ark of wood. Here at the North Pole, a few men performed a similar service with an arc of electricity. The flying saucer which landed here and its pilot have been destroyed, but not without causalities among our own meager forces. I would like to bring to the microphone some of the men responsible for our success... but as Senior Air force officer Captain Hendry is attending to demands over and above the call of duty... Doctor Carrington, the leader of the scientific expedition, is recovering from wounds received in the battle.

Eddie: [Softly] Good for you, Scotty.

Ned Scott: And now before giving you the details of the battle, I bring you a warning: Everyone of you listening to my voice, tell the world, tell this to everybody wherever they are. Watch the skies. Everywhere. Keep looking. Keep watching the skies!

"Keep watching the skies." A perfect sentence that crystallized the paranoia and fear of the Cold War, where Americans have realized their oceans no longer protected them from attack when the enemy could fly planes over the United States and drop nuclear weapons on our cities. Here in 2021, after a year of living through the COVID-19 pandemic In which our oceans also didn't protect us, what else should we keep watching?