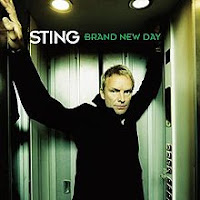 Twenty years ago today, Sting released Brand New Day and I was enamored with his sixth studio album. It was the first of a pair of new records by two of my favorite rock stars (come back next week for my take on David Bowie's ...hours). I was newly married, newly employed, and the end of the millennium was mere weeks away. It was a fabulous time, and this album landed right in the middle of everything.

And it hit me exactly at the right place musically and lyrically.

I've enjoyed Sting's music since Synchronicity, but if push comes to shove, I easily prefer his solo work over his Police music. I like his explorations of other styles of music and lyrics, and we got a microcosm on this one album of nine songs plus and intro to a tenth.

I fell hard for this album, but I hadn't spun it in a little while, so it was nice to get back to it. For me, it still holds up pretty well, with some all-time favorite songs from the entire Sting discography.


A Thousand Years - A downbeat opener (an odd choice to kick off the concert), nevertheless, this meditative song is one I ended up enjoying quite a bit over the years.

Desert Rose - On any given day, this is my favorite all-time Sting song. Loved it from the day I heard it twenty years ago. When Cheb Mami starts singing, with that distinctive Middle Eastern scale and chords playing in the background, I was hooked. The exotic lyrics mixed with the somewhat mysterious instruments bring to mind multitude of desert visions in my mind. The instrumental break, with the sitar high in the mix, is the musical equivalent of a camera mounted on a helicopter as it flies low over the desert sands. By the last chorus when Sting and Mami sing their lines, intertwined, is hypnotic. Fantastic song.

Big Lie Small World - From the Middle East to Brazil. It's one of the best things about Sting: his willingness to explore the world's music and incorporate it into his music. This bright bossa nova song is sung in Sting's trademarked English teacher way. Lots of word play, and the first instance of trumpeter Chris Botti, unknown to me at the time. Botti's trumpet almost gives this song a noir vibe. This song, like 1996's I Hung My Head and others, is a short story in four minutes.

After the Rain Has Fallen - An immediate style change. Instantly brighter than the dark of Big Lie Small World. Here Sting tells the story of a knight trying to save the princess, complete with hand claps. The chorus is one great gob of smiles, a joyous thrill. Sting's bass is wonderful buoyant here, jousting up and down the fret board. When he starts talking about "take me here and take me there," the song builds back up to another ebullient chorus. Love this song.

Perfect Love...Gone Wrong - A jazzy little number that seems like the direct descendant of Moon Over Bourbon Street. The second dog song in Sting's career, more intricate wordplay enlivens a song that might have been pedestrian. Perfect Love benefits from a wonderful rap in French for which there is no translation in the liner notes. Why? Because dogs can't really understand people and vice versa. Botti's trumpet flits in and out of the tune, like little musical gnats. Pianist Jason Rebello gets a short solo in a funky interlude.

Tomorrow You'll See - Brandford Marsalis, famous Sting collaborator from 1985 onward, shows up on clarinet here. The story of a prostitute is sung in Sting's intricate talk/sing way leading up to the more melodic chorus and more clarinet. The bass in this tune is somewhat different, more like from a bar rather than the traditional bass sound on every other tune. The Hammond organ brings a street-level vibe.

End of the Game - I've had the full version of this song for nearly twenty years now, so I've included it in my playlist as the full song. Not even sure why Sting didn't just include it in the regular album. But when I think of this album as a whole, this is the one song I always forget about. Perhaps Sting was on to something.

Fill Her Up - Talk about the oddball song on the album. Love the story of a gas station attendant just absconding with a few bucks to impress his girl. Definitely a full-throated gospel song, and it's not bad, but does it really fit on this record? Feels more like a Ten Sumner's Tales tune, or Nothing Like the Sun.

Ghost Story - Another meditative song, largely as a result of the plucked guitar that opens the song, this tune swells like an orchestra playing a symphony as the song progresses.

Brand New Day - The opening guitar strings hint at another Middle Eastern tune, but the major chord progression segues into the 3/4 time signature of the main song. Another tune chock full of joy, not the least of which being Stevie Wonder's harmonica playing. I've always loved how Sting delivered some of his sung lyrics in a rhythm counter to the main beat. And I really dig how he ends the song with his numerous metaphors. A fun way to end the album.


Windmills of Your Mind - Sting the Jazz Man shines in this bonus track available in 1999 on the Japanese version of the album. One of the aspects of Sting's voice I find interesting is his lack of vibrato. It's just pure, clean notes. Here that kind of "Broadway-type" singing comes across wonderfully. It almost makes you wish he'd do an entire album of jazz standards.


There were a ton of various mixes of many of the tunes on this album in 1999, into 2000, and all the way into 2001. Some are fun and good. Others a shrug. You've got the Desert Rose (Chillout Mix). After The Rain Has Fallen (Extended House Mix). Perfect Love Gone Wrong (Dub Remix).

One highlight was the Bill Laswell remix of "A Thousand Years." The original six-minute meditative song was extended to twelve. Additional orchestration and Middle Eastern drums were mixed in, but one thing really stands out on this song: Botti's trumpet. Playing with a somberness Miles Davis might actually admire, Botti's horn swirls in and out of the first half of the song, reminiscent of the live version on the Brand New Day tour. The latter half of the song is the basic beat with Botti basically playing a solo.


The tour to support the 1999 album lasted nearly two years. My wife and I saw him here in Houston in August 2000 and we very much enjoyed seeing this band live. First time to see Botti live, and I started listening to his music. Even saw Botti live with his own band. As Sting toured, he would show up on the late night talk shows. I watched and recorded every one of them. As much as I enjoyed the full band version of Brand New Day (on Letterman), I really dig the acoustic version he did on the Conan O'Brien show. Here he is singing "After the Rain Has Fallen" on the Tonight Show.


The entire Brand New Day era ended on the evening of 11 September 2001, when Sting and his band were set to perform the second of two shows at his Italian villa. We know what happened that day. Tempted though he was to cancel that evening's performance, his band convinced him to use music as a way to start the healing. You can see it happen, in real time, if you watch the DVD of All This Time, which came out in November 2001.


Brand New Day is one of two Sting albums to which I constantly return. The other is Mercury Falling. Of the nine tracks on this record, five would rank high in an all-time list. I thoroughly enjoyed the entire Brand New Day era. It was a great time to be a Sting fan.

Has it really been twenty years?

What are your memories of this album and era?
at September 27, 2019
Email ThisBlogThis!Share to TwitterShare to FacebookShare to Pinterest
Labels: Music, Sting, The Music of 1999