One Last KISS in Houston 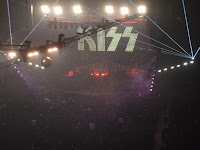 Forty-one years and nine months. The first is the number of years I've been a KISS fan. The latter is the difference between the day I bought my tickets for the last KISS show in Houston and the day they actually arrived in town. And in that span, time marched on.

Gene Simmons turned seventy. Paul Stanley turned sixty-seven. And then some of the tour dates got postponed. Crap! Was there some health issues? Was there something the band, which also  includes Tommy Thayer on lead guitar and Eric Singer on drums, wasn't letting fans know about? Would we Houstonians get our last KISS?

I needn't have worried. The End of the Road Tour landed in Houston on Monday, 9 September, and it was about as perfect a show as I've ever seen by the band. It brought bittersweet emotions at the end, but it started with something that never, ever gets old.

You Wanted the Best...


After performance artist David Garibaldi painted three large canvases (ZZ Top; Mick Jagger; KISS), the crew altered the stage and raised the familiar KISS curtain. Various rock songs played during, and I was ecstatic to hear "Dirty Sexy Money" by The Struts boomed through the speakers.

But when Led Zepplin's "Rock and Roll" started, everyone knew it was time. The lights were doused, the synth notes vibrated the walls of the Toyota Center, and the two screens on each side of the stage--shaped in the familiar KISS Army logo--showed the band walking backstage. The the forty-year pronouncement of "Alright, Houston! You wanted the best, you got the best. The hottest band in the world! KISS!" 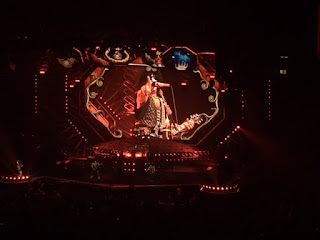 The eighth-note riff of "Detroit Rock City" greeted us, the stage lights blared on, the curtain fell, and the pyro exploded. There they were: Paul, Gene, and Tommy coming down on large saucer-shaped pads, smoke and sparks flying. Hexagonal video panels hovered over the stage. A monster screen dominated the backstage area, just behind a large metallic artifice that served as the pyro's portals.

As I told my son who attended with me: "This never, ever gets old." I can think of no other rock act--ever--who opens a show in a manner like KISS. Will there ever be another band like this? Never say never, but KISS showed the world how to open a show.

...We Got the Best (Setlist We Could Hope For)


Now, in preparation for this show, I looked at no setlist ahead of time, but you don't really have to. For the most part, the setlists have remained static with the occasional album cut gem thrown in. Sure, I'd love to hear "Yes I Know (Nobody's Perfect)", "Modern Day Delilah," "Danger Us," "Ladies Room," "Hell or Hallelujah," or "Naked City," but that simply is never going to happen. There is no reason to hope for something like that and walk away disappointed. Chicago's my other favorite band and they, too, have had basically the same setlist for a generation. If that pisses you off, don't buy a ticket.

Having said all that, this was about as good a KISS concert as I’ve ever seen. Five songs from the 1980s. Out of twenty total songs, that's 25%. Perfectly fine with that. Plus, we got a Sonic Boom cut ("Say Yeah") and the perennial favorite new song, "Psycho Circus." That left thirteen tunes from the band's 1970s heyday.

Let me go ahead and say this as well: When Eric Singer sang "Beth," he knocked it out of the park. Taking nothing away from Peter Criss, I have long since skipped that song when it comes up on shuffle on my phone. I had to sit through it that night, but I didn't mind. It was different. It was powerful. I want this version on audio. 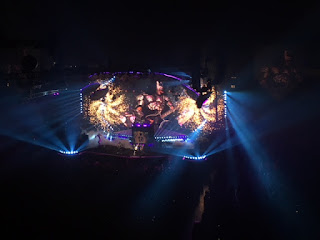 The Hottest Band in the World (Who Knows How to Entertain)


Knowing this was the final tour, KISS pulled out all the stops and lit all the fuses. The fire was felt by those of us on the far side and in the upper deck. The explosions were wonderfully loud. Ironically, this is the first time I've seen the band in a basketball arena. The Woodlands Pavilion is outdoors and has a sound ordinance. The new Sugar Land Smart Pavilion Center is great, but when I saw KISS there in 2017, they volume could have been turned up.

Not this time. The music was pleasantly loud. The vocals propulsive. The drums booming. Tommy's lead guitar tastefully screeching.

As the show kept going, there was plenty of time for Paul Stanley to chitchat with the audience. Because this is the last time he'll have all us Houstonians in the same room as the same time. It was all smiles all the time.

But the end was inevitable.


I know myself. The older I get, the more emotional (sappy, as my wife says) I get. I had an internal debate on how emotional I'd get during the opening song and during the finale. For the opener, I was all smiles and fist pumping.

But as the opening chords of "Rock and Roll All Nite" started, I knew this was it. This was the last time I'd hear KISS play this song. This is their mission statement, their life outlook for the most part. It was a chorus everyone the world over can sing. This is their Hall of Fame song.

I had my phone in position, snapping photos, but I was not watching through the screen. I was watching with my eyes, my youth, my adulthood, my fandom, and everything else. As Paul started to break his guitar, the emotions welled up. I didn't exactly roll a tear, but they were there. The last few moments of me seeing KISS in person, it was through a mixture of confetti in the air and tears in my eyes.

KISS was my first favorite rock band. And now I've seen them for the last time. Sure, there will be more videos, maybe even a DVD of this tour, and maybe even a one-off show in the future. But I likely will never see them again. I will never see the band that captured my imagination as a boy and still resonates with me in middle age.

I walked out of that building thoroughly satisfied with the show.

Man! Has it been a great time.

Thanks, KISS, for being a part of my life (and the lives of millions more).