How I Spent Batman Day Part 1: Scooby Doo and Guess Who 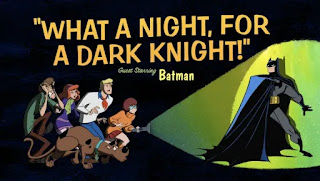 Yeah, it's a made-up "holiday" but it did get everyone talking about Batman. That's the point. For me, well, it turned into a day-long celebration.

Scooby Doo and Guess Who


I've known about the latest Scooby Doo series since the summer, but I've never watched an episode because the show is on Boomerang's streaming service. We already have Netflix, Amazon, Hulu, and a couple of anime ones, so I was in no mood to hang another service on the monthly bills.

But when I read that the latest episode featured Batman, voiced by manifestation of the hero himself, Kevin Conroy, I changed my mind. Turns out, there's a 7-day free trial for the channel, so you know what I did.

The episode was funny, over the top, and honest to the original. Heck, even the title card, "What a Night for a Dark Knight," was an homage to the very first episode that debuted fifty years ago this month. Man-Bat is the villain, and during the inevitable chase sequence in an old department store, Velma, Shaggy, and Scooby show up in the skiing gear from another season one episode.

The coup de grace? When they unmask the villain.

Do yourself a favor and check out this episode.