Surprisingly, when Star Trek: Discovery was announce as the major first show used to draw in viewers to CBS All Access, I was largely indifferent. But when I heard about Jordan Peele was going to executive produce and host a revamped version of Rod Serling's The Twilight Zone, I was there.


For a myriad of reasons, all subsequent efforts to reboot the original Twilight Zone proved unsuccessful. Other than the on-set accidental deaths of Vic Morrow and his fellow actors, I can barely remember the movie. The 1980s TV  version  was better, but I can only recall two episodes. And the one early in the 2000s? I had to be reminded it existed via a CBS Sunday Morning piece.

But the Peele version looked to be something different. One view of the trailer, debuting after the Super Bowl, told me the franchise was in good hands with a healthy dose of homage being paid to the original while eyes focused on the here and now.

So it was with eagerness I watched the first episode, "The Comedian," free on YouTube.


Perhaps the most crucial aspect of the original series--aside from the writing--was the black-and-white  film. It added the somber ambiance to the stories being told, with the high contrast between light and dark. The other series didn't quite match the mood.

At least with this first episode, the producers have figured out how to make a moody color program. The story follows comedian Samir Wassan (Kumail Nanjiani) as he constantly bombs on stage. His act is overtly political, and, as he tries to explain to his live-in girlfriend (Amara Karan), he's trying to make people think. They don't want to think. They want to laugh. His fellow stand-up comedians pretty much say the same thing.

With the setting of a late-night comedy club, this episode is lit by dim lights, placed in such a way as to show only certain parts of the scenes. Wassan's apartment looks like an upscale address, yet there are what appear to be headlights passing the windows. Not kidding when I say it came across very Blade Runner-like. So the palette was quite good. 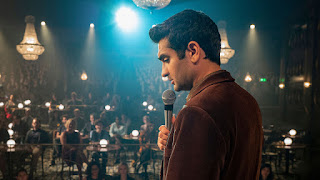 
I'm not sure how many Twilight Zone episodes turn on a bargain being made, but this one is firmly in that tradition. While Wassan wallows at the bar, he sees J.C. Wheeler (Tracy Morgan). He is amazed because Wheeler, at the height of his popularity, simply seemed to vanish. I'm not a huge Tracy Morgan fan, but he nails it here. He's dramatic and enigmatic, restrained in a way you know he's hiding something. He gives Wassan pointers, specifically to draw from his personal life to make the crowd laugh. They clink their glasses, and we viewers know something has happened. 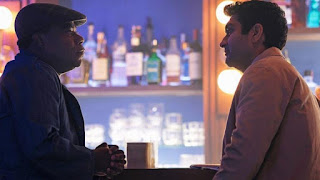 When Wassan next bombs on stage with his political bit, he shifts to talking about his dog. The crowd eats it up. Wassan keeps going. He nailed it. Everyone recognizes he had a good night. He returns home to share the good news with his girlfriend, yet she has no memory of the dog.

It was as if he never existed.

Wassan doesn't figure it out until the same thing happens again, this time with a member of his family. Then he puts two and two together and realizes he has the power to make people nonexistent. It's not murder if they never existed, right?


There's always a twist in every Twilight Zone episode, but I'm not going to reveal it here. You'll need to watch it. But I think you can imagine how the rest of the episode plays out. The ending was quite satisfying, echoing more than one Twilight Zone episode and one very famous movie ending.


Famously, Rod Serling fought with the censors at CBS back in the late 1950s and early 1960s. Very quickly in this new episode, with writer Alex Rubens has the characters drop the f-bomb, you know you're in a different realm. One can only imagine what Serling would have produced in an environment like this.

At least with one episode, The Twilight Zone (2019) is a worthy successor to the original series. I enjoyed this episode so much that I'll be subscribing to CBS All Access. And as a bonus? I'll get Star Trek as well.
at April 15, 2019
Email ThisBlogThis!Share to TwitterShare to FacebookShare to Pinterest
Labels: Jordan Peele, Rod Serling, The Twilight Zone