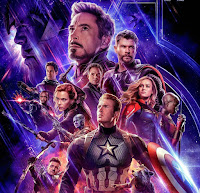 There's a thousand memes with Sean Bean, from Fellowship of the Ring, where it's a paraphrase of "One does not simply walk into Mordor." To take that to the Marvel Cinematic Universe (MCU), one does not simply review Avengers: Endgame.

Seriously, what can anyone really say about this movie? For me, likely for most of us, Avengers: Endgame brought to a close a series of 21 movies over 11 years in an wonderfully emotional, thrilling, intimate, and beautiful way.

So I'm not really going to review the film, per se, just highlight some moments I really appreciated. The list is random and as they occurred to me.

Spoilers will be given...because how can you not?


In a movie full of epic scope, the image, in silhouette, of a battered Captain Ameria standing alone against the hoard of Thanos. There was a moment when I thought he'd say "I could do this all day" but it likely would have fallen flat. There will be long-lasting images taken from this movie and will become shorthand for sections of this movie. I suspect this will be one of them.


Immediately after, the radio in Cap's ear sparks to life with a voice. It's the Falcon.

In a movie franchise full of incredible set pieces, the arrival and re-emergence of all the heroes might rank as the best. Goosebumps rippled over my skin and the tears came. Heck, they came often in this film, but that's what I expected. That moment, when everyone returned to stand with Captain America...holy cow! If we waited 11 years and 20 movies to get Endgame, then we waited something like six hours (all of Infinity War and 2/3 of Endgame) for this moment, it was so worth it. My theater broke out in applause.

And then Captain America's call to action: "Avengers...Assemble!"

The Ladies Carve a Path


That moment, when Peter Parker relinquishes the Iron Man version of the Infinity Gauntlet and he questions how Captain Marvel will get the gauntlet to the time machine, and then all the female heroes descend and stand in one remarkable scene. If that doesn't end up a poster.... I wasn't the only one who said out loud "It's the ladies!" My theater erupted in applause as these warriors carved a path through the bad guys!


Going in to the theater, I pretty much knew either Stark or Cap would sacrifice themselves for the greater good. I had an outside idea that it would be both of them, but having Stark basically pull a double-take on Thanos was brilliant.

And those last words: "I am...Iron Man." Again, perfection.


Months from now, when the DVD of Endgame is out, I'm hoping to learn a couple of film-making facts. One, did they purposefully edit Black Panther as the first hero to emerge as a direct nod to his groundbreaking movie? Maybe, but well deserved. But it's the second thing I'm really wondering: Did they re-shoot/add an extended version of Parker and Stark's reunion. In Infinity War, Parker's death hit really hard.

But I also liked that it was only Parker and Pepper Potts with Stark at the end. I didn't want all the heroes to line up to say good-bye. Like Stark himself said early on to Pepper, "It's always been you."


In a movie that literally had everyone in it, Stark meeting his dad was a natural. Just like Marty McFly telling his future parents about raising him, I loved that Howard asked Tony about being a father, and that he, Howard, already loved his unborn child. As a parent, I knew that sentiment as truth.


More tears. Of course Robert Downey, Jr. had to have some of the final words. It was him that kicked off the MCU and he now draws the curtain closed on this incarnation of it. That he was talking to his daughter, a daughter who would grow up with him and, more importantly, that he would not be around to see grow up, was heart-wrenching.

As a dad, that really got me.


Speaking of daughters, the reunion of Paul Rudd's Ant-Man with his daughter, now aged five years was marvelously done. She thought him dead, and there he was on her doorstep, un-aged. He, not knowing what happened, seeing living proof in the form of his own child. And that they were there, with Hope, at the end.


Like Return of the King, a story this epic needed more than one ending. Glad to see them all.

But Steve's last scene, as an old man, having lived his life with his favorite girl, man that was the happy ending this film series deserved. A man who gave all for his country got rewarded in the most satisfying way.

And that last shot of the movie, with him and Peggy Carter, finally getting that promised dance back in 1945? Perfect ending to a magnificent movie.

A Call for More?


I rarely care about all the little details behind a franchise such as the MCU. I'm content with what I see on screen. And I'm of two minds about what I'm about to say. But how cool would an anthology of short stories and/or a comic series be just telling the six stories of Steve returning all those stones. The conversation he would have with the Ancient One. Steve in space with the Guardians. Steve in Asgard. It would be kinda cool.

But I'm also cool with each one of us making up those stories. I don't need to know everything, but this struck me.

When Steve returned the Soul Stone, does Nat return to life?

Peter Parker. Okay, so we have a five-year time jump, right? So how's he still in high school?

Also, he seemed to say something about being gone for five years. Where exactly were the heroes for five years? Like Stark faked out Thanos, did Doctor Strange somehow put a spell over all the heroes who would turn to ashes at the end of Infinity War?

Steve and his other life. So, he lived his life in our time, right? So he would have seen everything we saw in these 21 movies, right? So he'd be there to see Stark become Iron Man, or watch CNN as Captain Marvel made her presence known in the 1990s. So, he'd just let all that stuff go on without interfering because he knew all would be fine, right?

And what about kids?


Anyway, just a few random thoughts on what may well be the best movie of 2019.

But that's the thing. The MCU I have consumed as an adult. I started with Star Wars as a child. There's likely going to be a push/pull dynamic between the two. Heart and head. They'll both be my #1/#2 movies of the year, but Rise of Skywalker already has a high bar to clear considering fan expectation. Now, it has competition on how to end a series.


For a different kind of New Year's Day.
at April 30, 2019
Email ThisBlogThis!Share to TwitterShare to FacebookShare to Pinterest
Labels: Avengers, Marvel Movies