(This is part 3 of an impromptu series looking at the impact of Hurricane Harvey on a small stretch of west Houston. Here is Part 1, and here is Part 2.)

Late yesterday afternoon, what struck me most was the quiet.

As I have done for over a week now, I rode my bike to various points near my neighborhood. The first stop was the Dairy Ashford/Ashford Parkway intersection. What was once a flowing river is now calm and dry. The water had drained enough so that there were three distinct pools of water: on Dairy Ashford north to the bayou and the two subdivisions that flank the intersection. Where the water was gone, the cement and surrounding dirt was a dry as you’d expect in early September.

The two policemen stationed at this crossing were new to me, but they still enjoyed and appreciated the baked goods I delivered on behalf of my wife. “What, are you trying to make me fat?” Officer Hightower said with a smile. When I mentioned we had dropped off a couple of pies at the west Houston substation, Hightower stopped me. “The cherry and the apple?” I said yes. “I only had the cherry, but it was one of the best cherry pies I’d ever had.” It made my wife’s day to hear that feedback.


The Stonehenge neighborhood still had water in the back of the neighborhood. Two law enforcement men guarded the area, one at the entrance and one at the water line. When I got to the water line, a lady and three men milled about. They meandered around a pickup with the tailgate open. Inside were waders, all with camouflage. The price tags still hung on the zippers.

The woman walked over and talked with one of the men operating a boat. Even now, a full week after Harvey finally hightailed it out of town, people were still boating back to their homes to salvage what they could. The woman wore a purple LSU t-shirt and she hustled back and told the men to suit up in the waders. She got into a pair and I asked if it was her house they were trying for. No, it was her mother’s house. She lived back in a cul de sac. I told her I knew exactly the cul de sac because there was a nice big corner house that decorated big for Halloween and Christmas. For Halloween, the owners put giant spiders all over the outside of the house. It had always been a destination location during the holidays. The woman smiled wanly. That was her mother’s house. It had sustained two to three feet of water. Most of the important things had been moved upstairs, but the ground floor was all but lost.


I rode past my office building—open for business, but my company was still out until Thursday—and noted the water had receded some. The smell was what hit me most. Couple sewage backwash with 90-degree heat and humidity and you can pretty much imagine the stench wafting through the air. It made me ride just a bit faster because the wind kept the odor out of my nose. The only other office building with folks working had their parking garage still under water. Well, the first floor. They parked their cars up and down the side street. The woman I spoke with said her company was on a skeleton staff until the water receded further and opened up the garage. That’ll likely be next week. Her home was fine.


A middle-aged couple stopped me and asked for directions to get to Highway 290, the northwest road out of Houston to Austin. I sighed and told them they were in for a long commute seeing as how it was after four. They were undaunted. They were also smiling. They were house hunting. Their home was inundated with water. It was a total loss.


After more than a week of not being able to get close to the intersection of Eldridge and Enclave—the site of many a rescue by the Cajun Navy—I threaded my way on dry land, through parking lots, and over medians to reach the shopping center that housed Sylvia’s Enchilada Kitchen, arguably one of the best Mexican restaurants in Houston. Their mole enchiladas are THE best I have ever tasted. The restaurant was located the closest to Eldridge so I suspected substantial water damage. Surprisingly the debris line was only about eight inches. 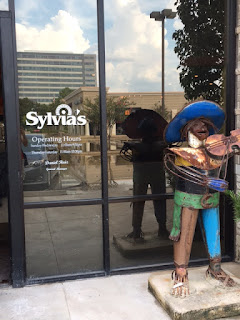 When I looked inside, I noted people inside working to clean up the interior. With a pantomime of me talking on a phone (not sure what I was thinking there), Daniel Ruiz, the general manager, opened the door and talked with me. He showed me around the inside, pointed out how they were cleaning up, and noted that they didn’t have any carpet. With a sense of pride, he said he planned on reopening on Monday. My family had already had a hankering for Mexican food—our favorite restaurants are either flooded or inaccessible—and I’m already looking forward to Monday.

Not sure of the science behind this, but on the curb there appeared to be leaf impressions. Granted, It’s likely just mud, but they certainly appear to be hurricane fossils. 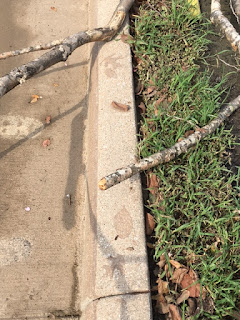 Speaking of odd images, the detritus of the area told its own stories. With traffic nonexistent at that intersection, the only sound yesterday was of rushing water, not a sound I expected so I searched for the source. It was across the street in the other shopping center. The water had broken through a wooden fence and now gushed downward. If there was one thing Harvey taught all Houstonians it was topography. We may be a city on a flat land, but we all know where the slopes and rises are now. 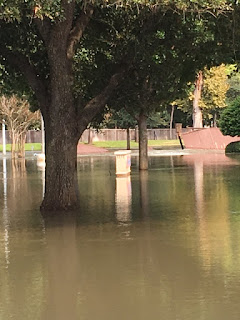 Not sure why someone abandoned their suitcase in front of the Holiday Inn—closed until further notice—but there it sat, baking in the sun. Note the car across the street, its front end dipping into the ditch. 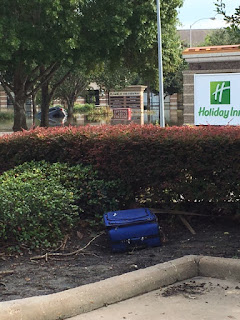 The residents and workers of the Holiday Inn went to extraordinary measures to safeguard their cars. Not sure I would have thought to do this, but this person did. See the water line on the tire. 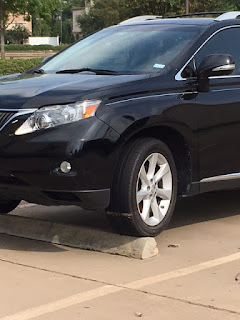 When the water rescues were in full swing, many people swarmed the area. I found this little makeshift path fascinating. The rescuers used what was on hand to avoid vehicles and people languishing in the mud. 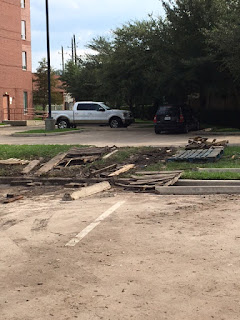 The Residence Inn by Marriott was still open. This being the Energy Corridor, we have many folks from other countries. I spoke with David Snow, the manager of the Residence Inn and he explained what they did to help the foreign visitors who had nowhere else to go. They evacuated the first floor and put people in any other room up to the top floor (I think it was six). They also brought all the food to the second floor, including the beer and wine to make his guests comfortable. Finally, they were able to isolate the electricity from the first floor to prevent a short circuit.

I complimented him on the effort he and his staff took. He was stuck at the Inn for the duration of the storm, unable to get back to his northwest Houston home. Thankfully, his home sustained very minor leaking. I said it must have been something to watch the Cajun Navy from his front row seat. He shook his head in admiration for the effort they put forth. He mentioned he would walk the perimeter of his hotel at one, two in the morning. He’d see some of those guys jump on their boats and motor off into the darkness. He wouldn’t see them again until morning when they’d be brining back survivors.

Right as I was leaving the Residence Inn, I ran into two soldiers, Aldridge and Cantu from the National Guard. These young men said they were staying at the Inn and it was the first real bed they’d had in a week. They had been deployed out in Orange, Texas, on search and rescue and had returned to Houston for additional duty.


When I got away from the water line and kept going south on Eldridge, signs of life reemerged. The cars thundered along the street, joggers ran their routes, and parents pushed babies in strollers. Much like the residents of some neighborhoods who put signs on their front yards pleading for the power company not to turn off their lights, businesses along Eldridge were eager to let the public know they were open for business. 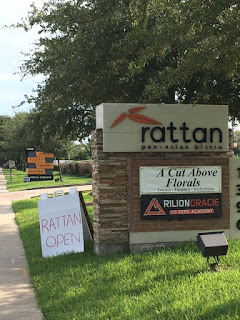 Yes, that is a Japanese restaurant right next to a French restaurant and bakery. On the other side of the bakery is a Thai restaurant followed by an Indian one. If you love food, west Houston is a fantastic place to live.

Actually, no matter what, west Houston is a great place to live. We’ve sustained terrible damage and it’ll take weeks, months, and years to get back to where we were before Harvey, but we’ll get back.
at September 06, 2017
Email ThisBlogThis!Share to TwitterShare to FacebookShare to Pinterest
Labels: Blog, Food, Houston, Houston Strong, Hurricane Harvey

So awful to read of the devastation. Reminds me of Katrina here

Thanks Scott for your report! You should get a job as a reporter!
It's hard to see Houston suffer from our home in Europe. In my mind I biked the road with you and got tears in my eyes reading about all the devastation in our old neighborhood. I think 'Memorial Thicket' on Memorial, west of Eldridge (our first house in Houston) was completely flooded.
Feeling sad about all those losses, but feeling proud of all the Houstonians who will work hard to recover a.s.a.p.