Stories of Harvey: The Protectors

I received some nice compliments from folks who read the initial post regarding my personal experiences with Hurricane Harvey here in Houston. As I wrote in some of the responses, I’m a writer. My story is one among millions.  The process of writing the piece was emotional yet cathartic. I document my life, usually by writing about books, music, and films, but the hell that Harvey wrought was too large to ignore.

One thing about an experience like this: you rarely meet a stranger. If you are a person who doesn’t like to chat with other folks, a common experience like this is the perfect ice breaker. More than once this week during my daily bike rides around my area, I would stop, look at where the water is, and just start talking with folks.

Yesterday, I paid specific attention to the policemen. They had the unenviable job to protect the mayor’s order of a mandatory evacuation in the flooded Buffalo Bayou zone. My house is a few hundred feet south of the southern border line. It is on various north/south streets that I have visited every day to check on the water lines.

Of all the places I visited regularly, it was the most devastating. It is a split road with a median. By Sunday, 27 August, just the first day, it was impassable north to the bridge over Buffalo Bayou. It only got worse as the week progressed.

But by yesterday, 3 September, much of the water that had been rushing east across Dairy Ashford was now gone. The neighborhood to the east still suffered and the one to the west was worse, but you could see the road.

There’s a Super K convenience store where members of the Texas State Park police and other first responders had stationed themselves. It was their job to get back in the neighborhoods, assess if there were folks still living in their homes, and get them out. Some people probably feared for their belongings, but the police were there for protection.

I met two HPD officers standing guard. In the late afternoon sun, I was in my t-shirt and shorts. They were in full uniform, Kevlar included, sweating up a storm. But they were in good spirits and happy to talk with me. The first thing I noticed were their badges. With the death of Officer Steve Perez in the hurricane, one of their own was down. They wore the mourning badge ribbon with the Latin inscription Nemo Me Impune Lacessit, which translates to “No one provokes me with impunity.” They mentioned it, but I told them I knew all about Officer Perez. I think the entire city knows about him.

The homes of these two officers, Officers Horowitz and Gonzalez, were spared although Officer Horowitz, who lives farther west of me in Katy, said the waters were rising up his driveway when the rains stopped. While I was there, the telephone lines into the affected neighborhood were reestablished. Seeing my son, the telephone worker proudly announced the Internet was back on. “And that’s the most important thing, right?” My son agreed. Heck, I did, too. Late on Friday afternoon, we had the hat trick: our power went out, our cable went out, and our cell phone went out. At least all three worked through the storm.

Officer Horowitz commented that the toughest part of policing this particular stretch of Houston was that the bayou had flooded all the north/south streets, but the boundaries of this district included the area north of the bayou. If a call came in and they needed to go north, they would have to drive all the way to Voss Road, about seven miles to our east just to get up to Interstate 10 and then come back. He mentioned that HPD may have to create a temporary solution until the roads are again passable.
He and his partner had to stop one driver from approaching, but when they all started talking and laughing, I knew it wasn’t a bad situation. A few minutes later, they were called away. I thanked them for talking with me and making sure the area was safe.

There are two neighborhoods directly to my north that were affected by the flooding. In both cases, the backs of the neighborhoods were flooded while the fronts were not. I monitored the water lines all week long. Yesterday was the first day I did not. It felt weird. By yesterday, the water levels in the two reservoirs was down enough that the Army Corps of Engineers was lessening some of the drainage at the spillway.

The mayor’s evacuation notice was only for folks still living in homes with water inside. When the announcement was made, the city drew a large rectangle. To help people make up their minds, he was going to have Counterpoint Energy turn off the power to the affected houses. What about the homes in the affected area but without water damage? They were fine, said the mayor, but that didn’t stop more than one family to erect signs like this. 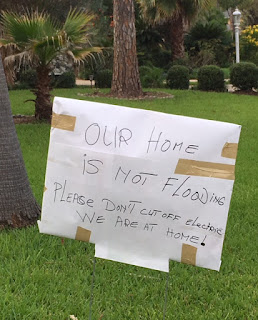 Yesterday afternoon after five, I rode into Shepherd Trace. A police suburban was parked at the water line, about thirteen houses inside the subdivision, a far cry from the previous water line about three homes in. One officer was inside, the other was outside having a cigarette. I stopped and started talking with the officer inside. He was HPD Officer Vu. He told me much the same as Horowitz in terms of what they were required to do. I asked when he was off the clock and he said six. The only provision was that he and his partner couldn’t leave until another team showed up. Sometimes that could take an extra hour or so.

His partner turned out to be Officer Rodriquez from El Paso. His uniform was different that HPD’s—he wore his gun belt with a leather strap crossing his chest—but the different shade of blue gave away his identity. I thanked him for coming all the way out here to help us. (For you non-Texans, El Paso is 744 miles away, about a ten-hour drive.) He was very deferential, stating that he and all the other officers from other municipalities were here to help their fellows in HPD. That kind of camaraderie is certainly what permeates the men and women who wear a badge and swear to protect civilians like me. But it was when I asked him if he was getting paid by FEMA that he revealed his character. He said he hoped so, but if not, it would be volunteer time and he was happy to do it.

I live in the Energy Corridor and some of the buildings are close enough for me to bike to work or walk if need be. Enclave Parkway is a short road that houses a few companies like Schlumberger, Dow, and Sysco. You can drive north up Enclave to the first stoplight, but then you can’t go any further. That first stoplight is where the Sysco building is located and I wheeled up to their visitor parking lot where I met a security officer with “S. Connor” on her name badge. Her jurisdiction was up and down Enclave. When she saw Harvey approaching, she made arrangements for her dog and camped out in the Sysco building all during the storm until this past week. After the rain stopped, she patrolled all over the flooded area, sometimes in the truck, other times in the golf cart. She marked water line locations and which cars were stranded and flooded and reported back to her security company.

It was with frustration that she pulled out her phone and showed me a photo of a car. Its driver had, within the past hour, driven it into the water, perhaps as an attempt to get some insurance but perhaps not. Ms. Connor was inclined to think the former. It was a fancy sports cars and she lamented that the driver might have an easier time getting some money than she would. You see, when she finally went home, she arrived at her apartment and someone offered to take her to her place by boat. She said the comment stunned her and it took her a few moments to process. When she got to her house, it had flooded. She had prepared and stashed important papers and special things up “just in case a little water got inside,” but many things were ruined. The apartment company offered to move her and other residents to a different complex within its organization, but she would have to pay the higher rent. She couldn’t afford the extra $200, so today, in addition to filling out the paperwork for her ruined property, she’ll have to find a new place to live.

There’s a school near me and it’s not everyday you see a tall antenna with a generator churning, giving it power. When I rolled up to the one man sitting there, I learned he was from Williamson County, Tennessee. He and his team of ninety folks from the Emergency Management Agency had driven seventeen hours to get down here. They were assisting the Houston Fire Department in getting people out of the evacuation zone. They were stationed at a nearby mall the previous day and he didn’t know where they’d sleep last night or where they would be stationed today. But he was happy to be here. “Houston and Texas would be there for us, so we’re here for y’all.”


Ours is a stretch of Houston where, if you didn’t know about Harvey, there were no visible signs of devastation or flooding. We are so, so fortunate. As the old hymn says, count your blessings and name them one by one. Those of us just beyond the flood line know exactly what the first thing on that list of blessings would be: a home.

I’m not the only one who knows that. Among the sounds of passing cars and distant helicopters still patrolling the area last night came the sound of Mexican music. One family was having a party in their back yard, the talking and laughter so welcome after the week we’ve had. It’s going to take a long time before true normalcy returns to Houston—we will likely have a new definition—but it was nice to know that on this holiday weekend, some bit of normal is already here.
at September 04, 2017
Email ThisBlogThis!Share to TwitterShare to FacebookShare to Pinterest
Labels: Blog, HFD, HPD, Hurricane Harvey

the instinct to go on, to live in the face of tragedy. One thing that makes me hope for humanity

Thank you for writing this posts. It's great to be kept up to date on your corner of the world.

The one and only answer on a question "who can write my paper for me?" is here!